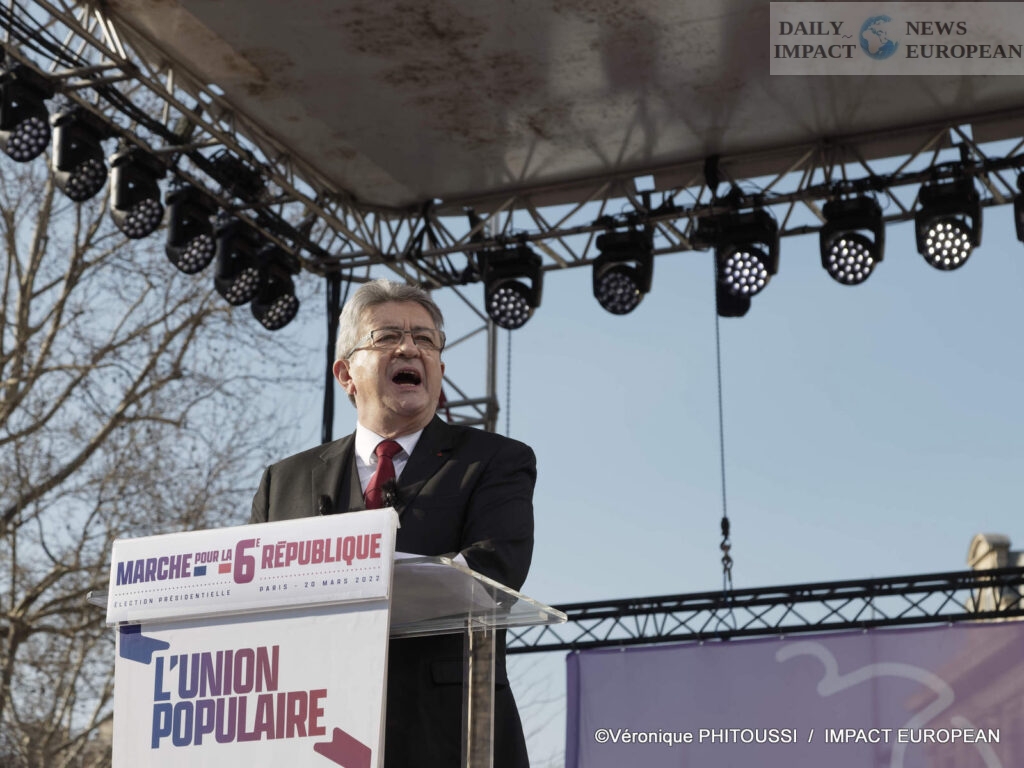 "The march for the Sixth Republic" started at 2 p.m. from Place de la Bastille, to reach Place de la République where the meeting of the candidate of the "Popular Union", Jean-Luc Mélenchon, took place.

“The march for the Sixth Republic” started at 2 p.m. from Place de la Bastille, to reach Place de la République where the meeting of the candidate of the “Popular Union”, Jean-Luc Mélenchon, took place. .

Several speakers intervened before the intervention of Jean-Luc Mélenchon, candidate for the presidential election.

According to the sources of France Insoumise, more than 100,000 people had gathered on Sunday March 20 in Paris for the meeting of Jean-Luc Mélenchon.

The candidate of insubordinate France began his speech with: “Another world is necessary and because it is necessary, we will make it possible”, he assures. “We are the ones who are going to build this new world, we are going to do it peacefully and democratically.”

Jean-Luc Mélenchon denounced the “authoritarianism” of Emmanuel Macron’s executive, governing vertically. According to Ministry of Justice figures, it appears that a total of 3,204 yellow vest convictions have been handed down; Of which 1,014 people were sentenced to prison terms and 1,268 to a suspended sentence and around 900 to an alternative sentence (community service, etc.) between November 17, 2018 and November 13, 2019.

Jean-Luc Mélenchon believes that this election is a “social referendum” against Emmanuel Macron’s promise to raise the retirement age to 65. The leftist candidate insisted on his proposal to bring him back to 60.

The candidate, Jean-Luc Mélenchon thinks that “It is a societal choice that is necessary in order to counter Emmanuel Macron’s program”.

Candidate Jean-Luc Mélenchon returned to his priorities if he were to be elected. He discussed the subjects that are close to his heart, unavoidable and necessary such as:

Jean-Luc Mélenchon returned to the reforms proposed by Emmanuel Macron in the field of education, stating that “school is not a business. (…) The knowledge market, where the entire education system is dedicated to the sale of a commodity. Knowledge cut into slices is the end of the republican school, it is the end of the indivisibility of the French people! “.

Among other measures decided, Jean-Luc Mélenchon announces the amnesty of the condemned yellow vests, the reclassification and the compensation of the victims of amputation and blinding. The candidate wants to eliminate the use of offensive weapons and “deadly physical incapacitation techniques”.

The Popular Union candidate clarified that he will reinstate caregivers who have not been vaccinated against Covid-19. Since October 15, 2021, doctors and healthcare establishment staff have been required to have a complete vaccination schedule or a valid medical contraindication in order to keep their job. This obligation is not linked to the vaccination pass or the health pass.

The Popular Union candidate stated that another world could exist where humans would be in harmony with themselves and in osmosis with nature. That the people have the opportunity to take power by voting on April 10.

Jean-Luc Mélenchon returned to the fact of freezing the price of gasoline at 1.40 euros per liter, he also returned to purchasing power, … He also promises that during his election, the decrees of the increase in the minimum wage and the blocking of prices will be among the first signed.

“Count on me to write it quickly,” announces the candidate.

The candidate Jean-Luc Mélenchon launched “Long live France, and above all long live the Republic”, the opposite formula to that used by Eric Zemmour. Among other uses of his semantics, the candidate returned to the use of the term “Planning” by Marlène Schiappa or Emmanuel Macron, stating that “the hour of the sixth republic has come”.

The People’s Union candidate went back on the 5 richest people owning as much as 27 million others, on the 12 million people who are cold and the others, “the humiliated”.

Last meeting held in Paris before the first round of elections.

The candidate of the Union Populaire took over the Marseillaise, broadcast by a sound system, and accompanied by his team and the supporters who came in large numbers.