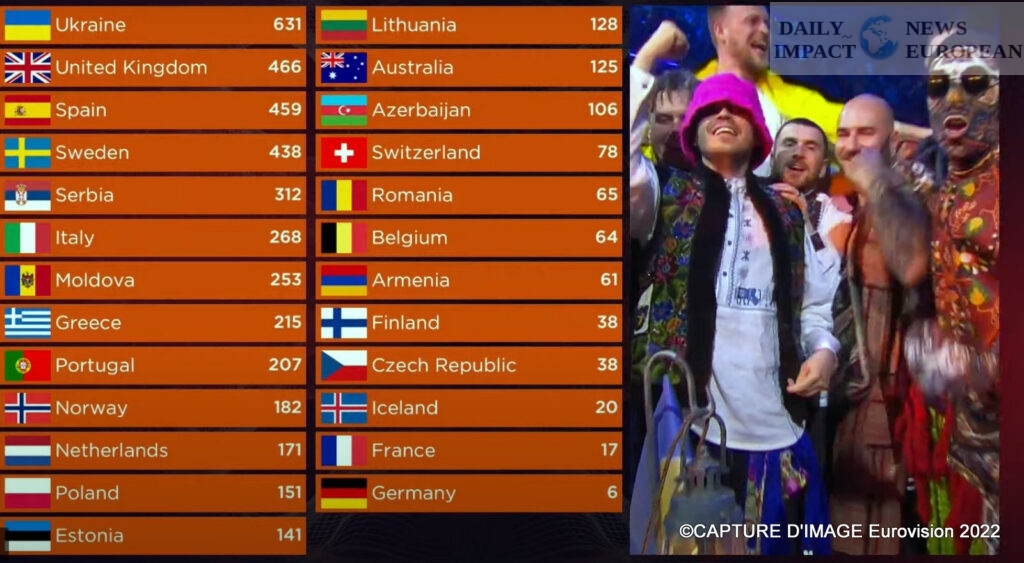 This 66th edition ended with the victory of the Ukrainian group Kalush Orchestra who, with 631 points, offered their country their third Eurovision trophy after Ruslana in 2004 and Jamala in 2016. The coronation of Ukraine will remain above all remembered as a historic moment when the geopolitical context – the invasion of this country by Russia – telescoped into a musical competition created in 1956 to celebrate brotherhood on a pacified continent.

Next year, the Eurovision Song Contest will probably not take place in Kyiv. But it was the group Kalush Orchestra which won the 66th edition of the competition, Sunday May 15 in Turin, Italy, thanks to its song Stefania, which was acclaimed by the public, which granted it a whopping 439 points, Eurovision record, to reach a total of 631 points.

“We try to keep politics out of all this”

“Obviously, we cannot ignore the fact that Russia is excluded, continued the host. We cannot ignore the fact that we all want to show our solidarity with the Ukrainians. I find that the Ukrainian group is very courageous, moreover, to show that Ukraine continues to live, to exist on the European scene through song, and that’s what we want to support. song is very good.”

Ukrainian President Volodymyr Zelensky hailed his country’s victory at Eurovision on Saturday, linking it to the Russian invasion, with this sentence written on his Facebook page: “Our courage impresses the world, our music conquers Europe.

But when will we stop mixing politics and music?

Ukraine is ahead of the United Kingdom (466 points), through the points offered by the public as a sign of solidarity, from the point of view of the jury, England deserved to win Eurovision as a symbol of 70 years of power of the queen this year.

The proof that today Eurovision is politicized, expelling Russia from the contest, preferring England by the jury, solidarity with Ukraine because of the war, when will the music be classified at its fair value in the Eurovision Song Contest?