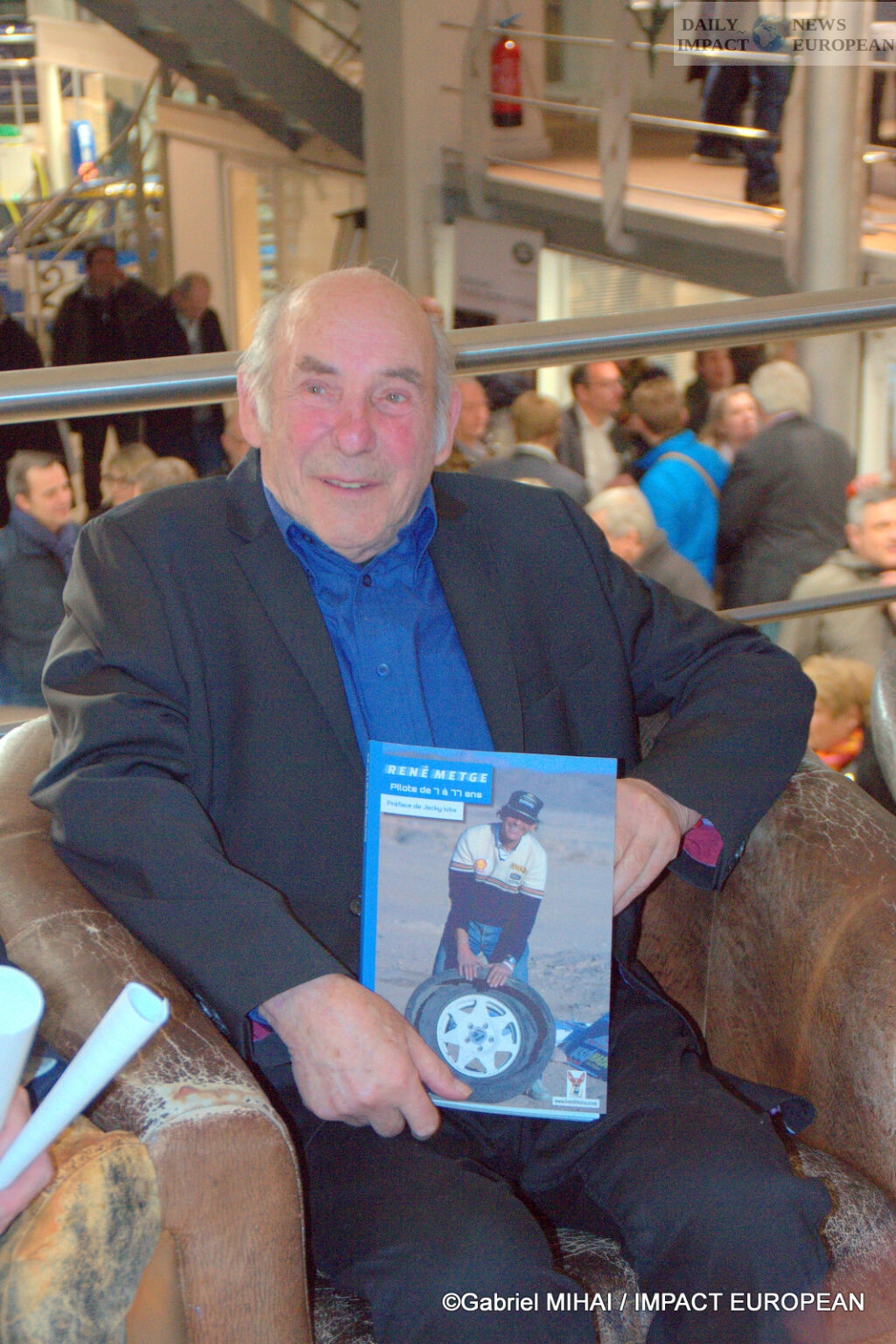 In order to immortalize his adventures, the one nicknamed "The cowboy of Malakoff offers his memories in the book he co-wrote with Gilles David, "René Metge, Pilot from 7 to 77 years old".

What do we think of when we talk about René Metge? The first response is associated with the 24 Hours of Le Mans, the Paris-Algiers-Dakar, Paris-Moscow-Beijing or Harricana rallies.

In order to immortalize his adventures, the one nicknamed “The cowboy of Malakoff offers his memories in the book he co-wrote with Gilles David, “René Metge, Pilot from 7 to 77 years old”.

To begin a signing tour, the “Range Rover -Arc de Triomphe Automobile” dealership welcomed the co-authors for a first signing on February 24 in the presence of an audience of prestigious guests including driver Jacky Icks who prefaced the work.

Who is Rene Metge?

René Metge was born in October 1941 in Montrouge. He grew up there with his friends including Michel Colucci (Coluche), sharing with him his passion for motorcycling, he married his sister with whom he founded his family.

When he was only 7 years old, René Metge cut his teeth as a driver in his father’s Bugatti.

At the Diderot school in Paris in the Belleville district (75019), he became a precision stamping mechanic. His first boss, Lucien Forestier trained him in competition on a Derbi 50 CC motorcycle. and gave him his garage, which René would call “Autorama 92 Malakoff-Range Rover.”

After good results, the Etablissements Colin Renault in Montrouge who were looking for a driver to do the French Championship on R12 Gordini, the landmark. In 1972, he won the Coupe de France then took part in various events with Austin, Mini Cooper’s, Triumph Dolomite with Jean-Louis Trintignant, Rover 3500 and Porsche. He thus joins the great Formula France Europe drivers such as René Arnoux, Didier Pironi and Patrick Tambay.

From the asphalt to the sand track, there is only one step, more like a wheel! With the help of Land Rover, he embarked on the toughest test in the world, Abidjan-Nice by Jean-Claude Bertrand on a Range Rover, then on Paris-Alger-Dakar by Thierry Sabine, first on a truck then on Range Rover and even in Dangel as a paramedic.

His first victory took place in 1981 with Bernard Giroux on the Paris-Alger-Dakar with the Range Rover VSD #212. Following this, the firm Porsche Stuttgart contacted him thanks to Jacky Icks. This is how he became factory pilot on the Paris-Algiers-Dakar. He will be driving a Porsche 911 4×4 Rothmans and will win in 84 and 86 with Dominique Lemoyne. He won this event 3 times, once at the wheel of a Range Rover then twice in a Porsche.

1986 will also be a year rich in participations. We find him Champion of France and Europe Supertourism on BMW, winner of the “Rose des Sables” with Thierry de Moncorgé on Buggy-Porsche and holder of the BMW CSI Tourist Trophy with Michel Trollé and Fabien Giroix. He participates in the 24 hours Le Mans as an official Porsche 961 driver with Ballot-Léna. He also takes part in the 500 kms of Hokenheim; at the Brn BMW CS GP; at the Nürburgring BMW CSI GP; at the 24h of Spa, at the GP of Nogaro

After the tragic death of Thierry Sabine in 1986, René Medge took over the management of the Paris-Alger-Dakar race in 1987, for 2 years.

Thanks to this experience, he organized from 1990 to 1992, Harricana, the snowmobile raid in the Canadian far north. Having become a rally organizer, he created the Paris-Moscow-Beijing in 1991, canceled and postponed to 1992. This event was designed to bring people and cultures closer together.

From 2002, René Metge officiated as co-driver of personalities Tout d’a bord with Johnny Halliday on Nissan X-Trail Dessoude; with his daughter Elodie in 2003 on Mercedes LM 403, then Bernard Chevalier, the following year on Nissan Dessoude as well as in 2007, with Yvan Muller.

Other rallies will see the light of day thanks to this great man: “La Transorientale (Paris-St Petersburg-Beijing in 2008; the Africa Race rally of Jean-Louis Schlesser where he is race director; the Raid Turkmen Desert Race rally in Turkmenistan , which he co-organized with Jean-Louis and Anthony Schlesser.

Still in cooperation with Porsche, he participated for the first time in the 24 Hours of Le Mans in 1977 with Anny-Charlotte Verney and Dany Snobeck in a Porsche 911 Carrera. In total, he has 6 participations including that of 1987, where he won the speed record on the Hunaudières line at 382 km/h on the factory Porsche 961 #203. The team runs under the German flag, it is made up of René Metge (France), Claude Haldi (Switzerland) and Kees Nierop (Canada).

Concerning the 24 hours of Le Mans Camion, created in 1981 on the Bugatti circuit, he won the event in 1983 on Camion Man.

His friends and teammates

The list of those who crossed his path during races, rallies or in life is long. Mentor, confidant or teammate, he was the friend of many pilots who shared his adventures but also of stars who made rallies such as Johnny Hallyday, Claude Brasseur, Evelyne Délhiat, Daniel Balavoine, Rémy Julienne, Hubert Auriol, Cyril Neveu , Henri Pescarolo, Alain Prost, Ari Vatanen, Gérard Holz, Jean-Claude Boutier and many others.

A book for motorsport enthusiasts

“René Metge, pilot from 7 to 77 years old” is a book that teaches us to know a man passionate about motor sports, an adventurer who started out as a mechanic to finish as a rally organizer, passing through team manager and co-pilot. A touching story, illustrated with a hundred photos where we discover over the pages, a father, a faithful friend who despite his legendary career, knows how to remain modest. It is also the life of the paddocks and bivouacs where he was the friend, confidant or mentor for his teammates, which reveals quite a few anecdotes.

This autobiography was released on March 1, on sale at FNAC, in bookstores, on Amazon and at LVEditions.

René Metge and Gilles David will be present at the Retro mobile show, Porte de Versailles in Paris (75015) on March 16, AMV stand at 6 p.m.