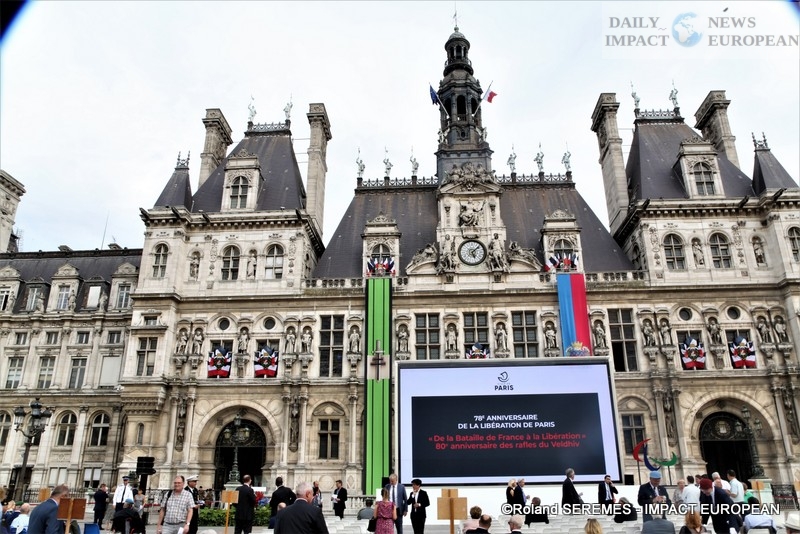 August 24 and 25, 1944 marked the liberation of the city of Paris. The first to arrive were the fighters of La Nueve, attached to General Leclerc's 2nd Armored Division. The next day General Leclerc entered the capital.

August 24 and 25, 1944 marked the liberation of the city of Paris. The first to arrive were the fighters of La Nueve, attached to General Leclerc’s 2nd Armored Division. The next day General Leclerc entered the capital.

It took 10 days of fighting to liberate Paris while 6,000 Reich soldiers were still present there. The Parisian insurrection broke out on National Day on July 14.

For a few weeks, the food rations of Parisians had been almost nil and the black market was thriving. For a kilo of bread, it was necessary to count between 20 and 35 francs and for an egg, 20 francs or the equivalent of a meal before the war. Gasoline, on the other hand, was reserved for emergency vehicles. The factories being closed, thousands of workers were unemployed. As the atmosphere became more and more threatening, the Secretary of State for the Interior, in agreement with the German authorities, decided to ban the celebration of July 14 and reinforced the police in the event of demonstrations. At this provocation, more than 100,000 Parisians descended on the Champs-Elysées, but also in Belleville, rue de la Convention or place Maubert, singing the Marseillaise.

On August 16, General Delmas was the intermediary between the Allies and de Gaulle and the FFI. Colonel Rol-Tanguy, appointed head of the Ile-de-France section of the FFI, worked alongside the Parisian Committee for the Liberation of the capital. Following the strikes which paralyzed Paris, no more public service, with the exception of the telephone, still in the hands of the Germans. Finally, the police joined the strikers on August 17. The next day, Rol-Tanguy launched the insurrection from his underground command post in Denfert-Rochereau. On the 19th, the police invaded the Prefecture, Ile de la Cité. hoisting the tricolor on the roof. but the Germans retaliate and a diplomat is named to make a truce which will be prolonged the following days.

On August 24, General Leclerc gave the order to seize Paris. After heavy fighting in the south of the capital, Captain Dronne and his 160 men entered the capital through the Porte d’Italie. to City Hall. The Dronne column was composed mainly of 125 Spanish Republicans who had taken refuge in the French territories of North Africa where they had joined the French army after having fled the Franco regime. It represented the 9th company of the marching regiment (RM) of the Chad, integrated into the 2nd Armored Division and placed under the command of French Colonel François Dronne.

History of the New

In February 1939, after 3 years of fighting against the fascists, the Spanish Republic was defeated. It was then that the retreat (the “retirada”) began, a period during which more than 500,000 refugees, including 150,000 soldiers, crossed the Pyrenees. They were installed in barracks on the beaches of the Mediterranean and many of them joined the French army to escape deportation at the border. By joining the Foreign Legion, they could go beyond the Mediterranean. Their situation changed in 1942, after the Anglo-American landing, anti-fascist militants took up arms for their ideal within the Corps franc d’Afrique. Their courage reached the ears of General Leclerc. The latter, having lost his Chadian soldiers following the refusal of the Americans to integrate them, needed 15,000 men to constitute the 2nd DB, he enlisted in 1943, 2,000 Spaniards, socialists, communists or anarchists for the most part. The Leclerc division joined Normandy from Rabat then on the order of General de Gaulle, entered the capital on August 24, 1944 with some armored vehicles. La Nueve returned to Moselle and Germany until May 1945. Only about thirty fighters remained, the company having been decimated.

Tribute to the fighters of the Nueve

It was not until 2004 that a plaque in honor of La Nueve was installed on Quai Henri IV (75004). In 2014, for the 70th anniversary of the liberation of Paris, the council of Paris named the garden of the Hôtel de Ville, “Garden of the fighters of the Nueve”, the inauguration took place on June 3, 2015. Since then, every August 24, an official ceremony is organized there.

This year, for his 78th birthday, the tribute ceremony, organized by the association on August 24, 1944, took place at the “Jardin des combatants de la Nueve”. It was followed by the opening of the exhibition at the Halle des Blancs-manteaux, (75004): “Faces of exile 1939-2019”, from the Resistants of the Retirada to today. It is composed of 2 separate exhibitions: “Paths of exile”, photographs by Philippe Gaussot and “La sangre no es agua” by Pierre Gonnord. Many guests were present, including Mrs. Gongora, descendant of a fighter, Mrs. Véronique Salou, president of the association August 24, 1944, the painter Juan Chica-Ventura, the little -son of the photographer Philippe Gaussot, Spanish and French official representatives.

Leclerc’s men entered Paris, divided into 3 groups: the Billotte and Dio columns from the south, that of Langlade by the Porte de St-Cloud. They were to regain control of the main axes and lead the assault against the German strongpoints whose soldiers were outnumbered. The French soldiers could count on the help of the FFI. The progress was dazzling: the French flag floated on the Eiffel Tower around noon and an hour later under the Arc-de-Triomphe. Jacques Chaban-Delmas came to welcome General Leclerc, who was arriving in his armored vehicle, at the Porte d’Orléans. Leclerc set up his command post at Gare Montparnasse, on a table facing the platforms. His aim was to obtain the surrender of von Choltitz, to whom he gave an ultimatum at 10 a.m. through the Swedish consul. With no response, the French attacked the Hôtel Meurice around 1 p.m., Choltitz surrendered with 10 officers and then signed the surrender at the police headquarters in front of Leclerc, Rol-Tanguy, Chaban-Delmas, Billotte and other leaders. He then signed ceasefire orders at Gare Montparnasse. One military command seat after another capitulated. While the groups of the 2nd Armored Division met at Place de la Concorde, the Parisian population reclaimed the capital.

General de Gaulle entered Paris, he settled at the Ministry of War, rue St Dominique, then at the prefecture and finally at 7 p.m., at the Hôtel de Ville, headquarters of the organs of the interior Resistance, where he was acclaimed . The next day, de Gaulle walked down the Champs-Elysées to Concorde, to the cheers of the crowd. He then went to the Hôtel de Ville and then to Notre-Dame where a shooting broke out. The news of the liberation crossed the borders, from London to Canada, to the United States, to the Middle East….

To commemorate the 78th anniversary of the Liberation of Paris, a literary, historical and musical evocation, “From the phoney war to the liberation, 1942: the Veldhiv roundup”, was held on the forecourt of the Hôtel de Ville , in the presence of the Mayor of Paris, several district mayors including Ariel Weil (Paris center), Jeanne d’Hauteserre (75008) … and many guests, the actors Marion Isvi and Nicolas Evrard read the 8 texts and the epilogue (“Paris blocked”, a poem by Victor Hugo”), after the taking up of arms, and the bagpipe piece by Pierrick Barbier, from the Brigade des Sapeurs-Pompiers de Paris. The 8 episodes, the prologue (“From the funny war to the Battle of France”) and the epilogue were accompanied by musical tapes.