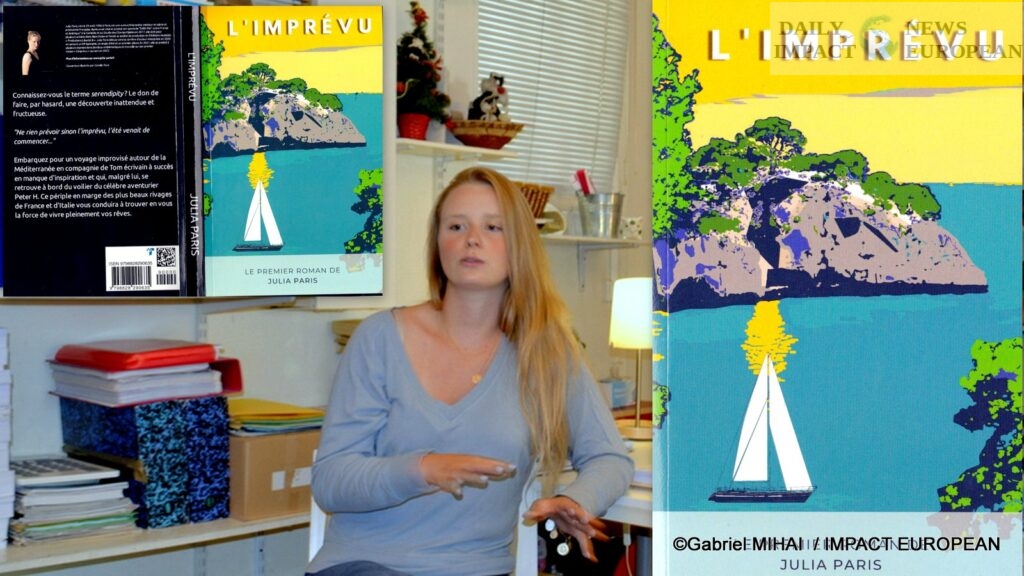 She is also concentrating on writing her first book, "l'Imprévu". Which was released on June 2, 2022 exclusively on Amazon in 3 formats (Kindle digital, hardcover pocket format and paperback format.

After the release of her first single “Fugue en Italie” then that of her album “En Vol”, Julia Paris introduces us to her first novel “L’inexpected”, an adventure mixing fiction and reality during a journey in the Mediterranean.

Already in her songs, Julia Paris had shown her talent for writing, she had also been in 2010, the youngest lyricist registered at SACEM, when she was only 14 years old. French author, performer, director and producer, Julia Paris has a new string to her bow, that of a writer.

With the start of summer and the sun shining, Julia Paris’ novel is a good way to escape during the holidays.

This book tells the story of Tom, a writer in search of inspiration who finds himself on the sailboat of an adventurer, Peter H. and his companion Janis. A couple of friends joined them to sail along the French and Italian coasts of the Mediterranean. We find the themes already retained in Julia’s songs, so dear to her heart (love, the sun, gaiety, the sea and Italy from the Riviera to Sicily).

During this journey that takes us to the Cretan coasts, we find the adventures of Tom and Sarah, this journalist for whom he fell in love before the departure of the boat. Having to return to Paris, she left Tom who will be surprised to see her arrive in Sardinia later. After having accompanied Sarah to the airport, Tom discovers Peter’s illness on a magazine. While the latter and Janis leave for Alexandria, Tom remains in their house in Crete. This is where he finds the title of his novel, watching the Swan leave, his friends’ boat, and it will be the name of the sailboat: “Unforseen…l’Imprévu”.

This novel brings the term “serendipity” to light. It is about the gift of making an unexpected and fruitful discovery by chance: it is an improvised journey…

A few words about the author

Julia Paris was born in Paris in 1996. At the Legion of Honor boarding school, she learned singing, the harp and the guitar. It is inspired by 70s text songs and country. In 2010, when she was only 14, she became the youngest lyricist registered at SACEM. Today, it has several hundred original compositions.

In 2017, she wrote shows, in English (the 7 deadly sins) and in French (Edith Piaf). After joining Claude Lemesle’s writing workshops, she worked with artists from the Universal Music label.

The following year, Alain Delon asked him to record one of his titles, he chose: “Je n’aime que toi” with music by Rick Allison. It was after this experience that she decided to embark on acting and in 2019, she created her own label, Productions Liberté (R). With this label, she released her 4-track EP then in 2020, the track “Fugue en Italie” was released in collaboration with Yacine Azzegagh and accompanied by a clip. Following the success of her single, she decided to record it in Italian in collaboration with Margherita Oscuro for the lyrics.

During the summer, she performs on the stage of the Citadel of St Tropez for the 3rd edition of the International Rosé Day. In Corsica, she participates in the Summer White Party of the Saparella reserve. She then recorded her first album “En Vol” which was released in October. It was at this time that she took part in the “Musical Encyclopedia” project at the Russian Center for Science and Culture in Paris.

During the year 2021, Julia Paris performed at “Lucas Carton” in Paris. In June and July, she resumes mythical titles of French song. She is also concentrating on writing her first book, “l’Imprévu”. Which was released on June 2, 2022 exclusively on Amazon in 3 formats (Kindle digital, hardcover pocket format and paperback format.