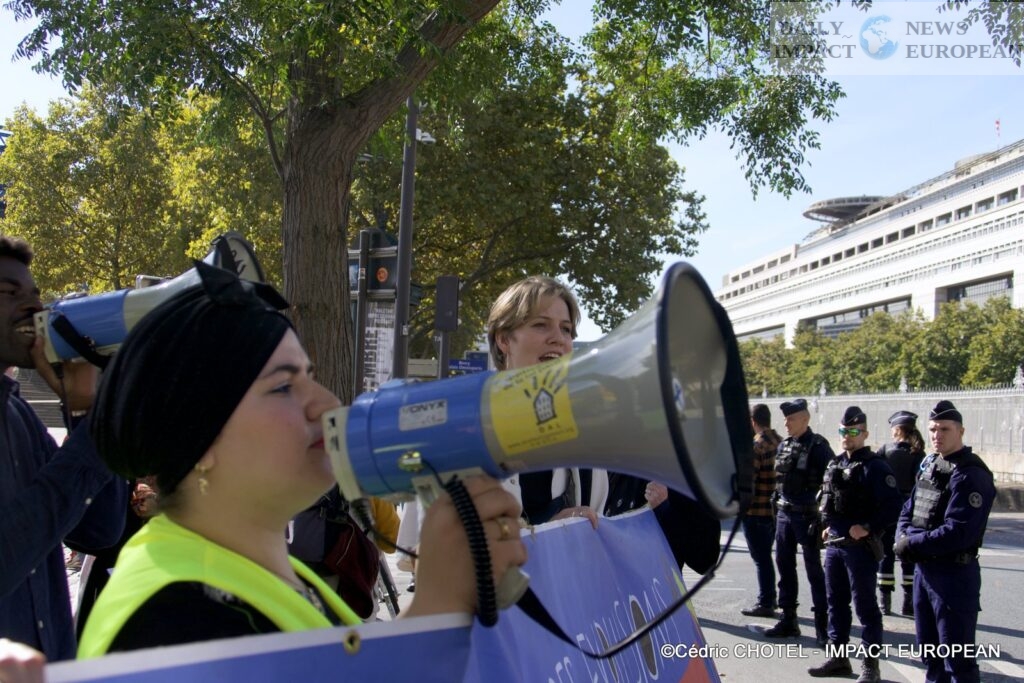 A rally was organized this Friday in front of the Ministry of the Economy to denounce the “State poverty housing budget”, at the initiative of around thirty associations and unions united within the Housing for All platform. and all.

A rally was organized this Friday in front of the Ministry of the Economy to denounce the “State poverty housing budget”, at the initiative of around thirty associations and unions united within the Housing for All platform. and all.

Every year we have new surprises on October 1, concerning social and private housing, from the 5 euro drop in APL in 2017, we have reached the 3.5% increase in 2022, but not their renovation, is all that who intends to take advantage of those who have a modest income.

While galloping inflation and the fall in purchasing power continue to weaken household budgets and threaten the daily lives of the most precarious, housing assistance associations met this Friday afternoon at Bercy (12th arrondissement) to recall the urgency of the situation. “The 3.5% increase in rent from October 1, the increase in charges throughout the year, and the increase in collective charges not protected by the energy shield (water, light, elevators, collective heating) in HLM but also in the private sector, threaten many tenants and inhabitants already overwhelmed, ”explains the Housing for All platform.

“When you are with a private owner, you can see that the receipt is increasing, that you will have to pay the additional charges. When we are housed in a condominium, there too it raises the prices, as long as there is collective heating, and when we are housed in HLM, it is the same, ”noted Jean-Baptiste Eyraud, door -speaker of the Right to Housing Federation (DAL). The latter notably pointed the finger at “all these energy groups which are making profits like never before, which have never earned so much money, like Total, Engie… they are fattening on the crisis. »

The representative of the DAL considered that it was necessary “Obviously to tax the super profits”, supporting a proposal taken up by the formations united within the New Popular Ecologist and Social Union (NUPES). “It is unacceptable that there are so many profits that are earned on the backs of consumers: we need to warm up, we need to take the elevator,” said Jean-Baptiste Eyraud. “In social housing and condominiums, there is sometimes central heating. Here too, we know that the bills will increase considerably. We have seen HLM tenants whose charges have gone from 60 to 200, even 250 euros per month. When you have low incomes, and you have an increase in expenses like that, you can’t get by! »

Anticipating today an increase in cases of banking bans due to the generalization of direct debits, the members of the Housing for All and All platform, which brings together associations and collectives committed to access to decent and affordable housing ( Attac, CNL, DAL, Utopia 56, etc.) alongside the CGT, FSU, and Solidaires unions, call for action against the “triple penalty” that threatens the most precarious tenants: “living in the cold, without a bank account, and under threat of expulsion”.

“We are asking for rent control in the private sector, downwards in all tense areas”, continued the spokesperson for DAL, who considers it essential to ensure real “control over the laws which regulate rents, on the measures that protect tenants. We need controls, sanctions, it’s like the highway code! The platform also urges the public authorities to increase the APL “with a return to the level of 2015”, to release aid for the construction of 250,000 HLMs, and to initiate “the restitution of the punctures of the State in the coffers of HLM organizations (3 billion euros in 2020) and Action Logement (350 million euros)”.

The mobilization was also an opportunity for association activists to recall their firm opposition to the “tax privileges” granted to owners of furnished accommodation using tourist rental platforms “like Airbnb, which in many places in France and Paris, dry up and make disappear normal rental housing”. In some boroughs, the share of apartments affected by such announcements represented a double-digit percentage before the covid-19 crisis. In 2019, the town hall of Paris estimated that 20,000 the number of multi-owners using the platform across the capital. Last July, the DAL had also accompanied residents to obtain the conviction of a real estate agency for an illegal Airbnb rental in the 20th arrondissement.

“Housing brings in a lot of money to the State and to communities”, recalled Jean-Baptiste Eyraud, citing the figures of “78 billion euros in revenue against 37 billion euros in expenditure for housing” in 2020 “What the Housing for All platform is asking for is that we devote 2.2% of GDP to housing”, a level that has not been reached since 2012. For the DAL spokesperson, “We should even do a lot more. If we want to pull out all the stops and properly house the entire population, we would not only have to massively build social housing, instead of private housing, Airbnb housing, but we would also have to requisition empty housing. There have never been so many vacant homes belonging to wealthy owners”.

Nearly 18,600 dwellings were “permanently vacant” in Paris at the end of 2020. In the capital, only 80% of dwellings are “occupied all year round by households for whom it is their main residence”: in fact, 9% are second homes, and 11% are considered vacant. According to other data, those of INSEE, the Île-de-France region has around 400,000 empty homes, including nearly 117,000 in the capital alone: ​​more than forty for each of the 2,600 people at the street identified in Paris during the Night of Solidarity in January 2022.

Regretting the recent media frenzy around miscellaneous facts, and the “brick communication campaigns claiming that tenants who remain in their homes after receiving leave are squatters”, Jean-Baptiste Eyraud fears today a toughening of the legislation aimed at favoring owners. “Behind, they are preparing amendments, laws, to deport immediately, to deport faster. Yet these are achievements that we have obtained; they forget to say that the State, when it does not evict immediately, it compensates the landlords”. Faced with a more than worrying economic situation for a growing number of households, and faced with the many shortcomings of the public authorities in order to put an end to the shortage of affordable housing, particularly in the Île-de-France region, the Housing for All and All platform calls more than ever for a “stop to evictions” of tenants.