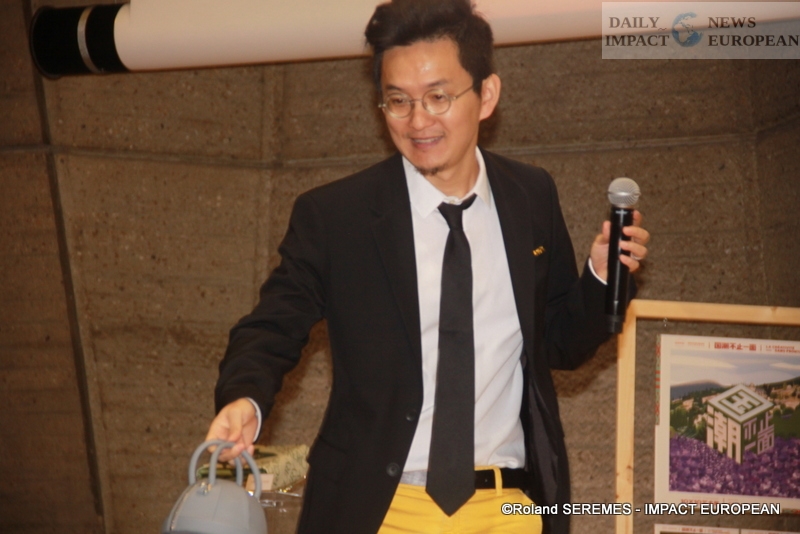 Every year since 2014, French and Chinese brands meet.

Every year since 2014, French and Chinese brands meet. For this 7th edition, the participants met in Paris at the UNESCO house (75007) on September 14, 2022. As in previous years, the honorary president was Mr. Jean-Pierre Raffarin, former French Prime Minister but also Honorary President of the event.

Bonjour Brand’s goal is to establish an emotional connection with more than 200 million young Chinese consumers, surprise their daily lives and contribute to known sales by impulse counting in the Chinese market in collaboration with the best designers and brands. French. Today, innovation makes it possible to develop creativity and cooperation with the Chinese market. This forum makes it possible to communicate internationally and to perpetuate the industrial collaboration of the brands of the 2 countries.

Bonjour Brand was created in 2014 by Yang Jing, who also founded the company Bonjour Shanghai in Paris in 2011 to provide design services for Chinese companies setting up in France.

The first edition took place in Paris, Place Vendôme in 2014, the year the forum was created. It brought together 436 guests, including fashion designer Pierre Cardin and Laurence Parisot, former president of Medef and business leader, who became President of the American bank CITI in France. There were more than 3,000 meetings between the guests and the 173 companies represented, including Le Printemps, Antonelle and Pierre Cardin on the French side and Huawei, Hisense and China Telecom on the Chinese side, under the watchful eye of 103 Chinese and French media.

This forum was organized in Paris on October 2, 2014, place Vendôme, in cooperation with the CCI Paris-Ile de France by Bonjour Shanghai and the communication agency “Mediane”, the day after the 50th anniversary of the People’s Republic of China. On the program, creation and innovation have made it possible to establish exceptional relationships and meetings. The Médiane agency allowed the interview of Pierre Cardin and the partnership of the brands (…) on the theme of the dialogue with the new China:

Considered as the land of brands, France offers opportunities for fair partnerships with China, which considers brand strategy as inevitable. This is why more than 50 Chinese companies took part in this Parisian forum. About twenty partners made the trip especially to find a partner.

Present during this first edition in Paris:

For this edition, there were more than 110 international creatives, more than 800 creations, the presence of more than 120 Chinese brands. This initiative highlighted the latest productions from numerous Sino-French collaborations, deserved lasting communication between French and Chinese brands, while following a philosophy of intercultural exchanges. Bonjour Brand has become a brand incubator for more than 100 million Chinese consumers after the Covid-19 pandemic since 2020, therefore, creators from all over the world must come together to inspire the public and contribute to industrial upgrading and find effective solutions.

This year, the Foresight and Innovation Foundation (FPI) was one of the institutional partners with Forbes, The Paper (information site belonging to the company Shanghai United Media Group), Huazeng Media, IP Shanghai, and Shanghai International Fashion Foundation (SHIFF) .

After the welcome of the guests at 9 a.m., the inauguration of the forum whose theme was “Ignite the imagination and make creativity travel”, we attended the testimony on Sino-French cooperation before the signing ceremony of the contract of the industrial sector, and speeches by Chinese and French guests representing companies and institutes.

The first round table was about “When French trends meet China Guochao (Chinese fashion)”. The second opened in the afternoon after the lunch break. Its theme was “Women entrepreneurs: sustainability & creativity in the post Covid-19 world and was followed by the 3rd: “Creativity without borders”, subject of the 10×10 exhibition “China Guochao” which presented many artistic creations aimed at to highlight the multiple possibilities of interpreting the concept.The latter is concretized by a logo composed of Chinese characters meaning “A thousand facets of China Guochao”.These works of French and Chinese artists make it possible to weave intercultural dialogues around the logo.

The 7th edition brought together a dozen international creatives who have been collaborating on the project for several years and have succeeded in several projects:

The first conference of design and creativity of the cities of the world is held in Shanghai for its first edition. It made it possible to develop future collaborations with French creators and to tell their own stories to the public. Chinese brands include Shanghai Watch, founded in 1955 by China’s first watchmakers; Perchoin Group, the oldest skin care brand in China and Sansen, another brand of the group that targets young people; Warrior, a well-known brand of sports shoes established in 1927, highly appreciated by Chinese for its quality and luxury; Feiyu China, sports shoes whose trademark dates from 1931 and registered in 1958. Like Warrior, it depends on the parent company Huayi. Feiyue shoes have a more modern design that breaks conventional rules.

During this forum, we were able to meet an artist, out of the ordinary, Li Jing who is also called Jin Paris Artist. Jing took his first steps in the art by approaching calligraphy with the master of culture and Chinese calligraphy Ouyang Zhongshi. Since 2008, she has been creating series on the theme of love which she has exhibited across the country, imagining installations, sculptures, traditional ink paintings, these are what she calls “Links of Love”, designed to connect the world while enriching its bold vision of Love. One of the most important was “Love Rose Valley”, about the blooming world and the ruins of the Wenchuan earthquake. There is also “Jing Pandora’s House”, “Love Graveyard” in Africa, “Love chips” in Las Vegas but also “l’Eglise d’amour” at Swann castle in Combray Villiers whose owner is none other than the French writer of Chinese origin, Ya Ding. Painted in red, the color of love but also of China, his native country, this concept has become a controversy because we are asking for the withdrawal of this color.

However, the artist’s concept aims to sublimate the architecture of the “Church of Love” and break down religious barriers through all forms of artistic expression.

On the occasion of the Fête de la Musique, Jing Paris Artist pushed back its limits by exhibiting “Love is linked” in the gardens of the Bourse du Commerce Pinault Collection, an unmissable high place of culture thanks to nearly 10 000 works by nearly 350 artists. This place was therefore predestined to host the parade “Love is linked” which Ya Ding was the instigator of this name. Moreover, the date of June 21 is not insignificant, Jing being an admirer of Jack Lang. For her, “The Fête de la Musique is everyone’s stage, the essence of art is love and freedom”. On this occasion, the immersive exhibition had Christian Audiger as guests and young designers such as Homolog, Gregory Assad, Hsimen, Promulias, Frobolous, during the parade.

Voted personality of the year 2021 in the art industry in China, the artist was encouraged by many cultural personalities including Noëlle Xie, international curator of contemporary art for this event symbol of an art in releasing Love strengthened in religion. According to art historian Man Bu, her creativity is “a feminist version of Ai Weiwei.