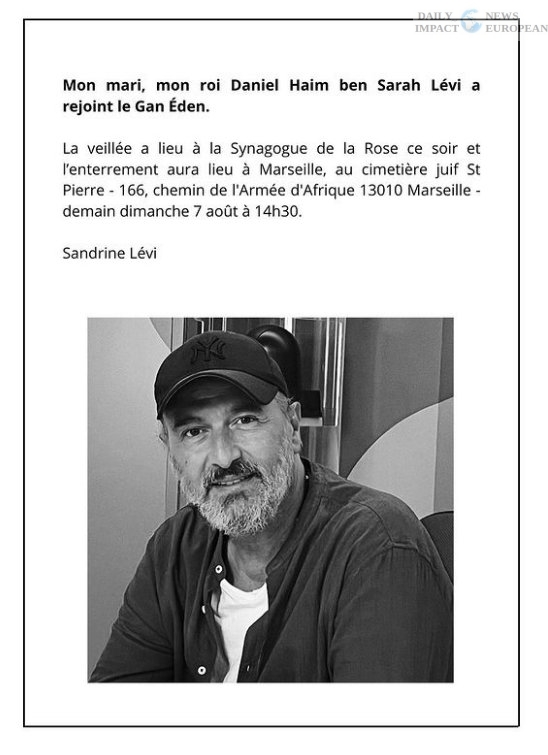 Following the disappearance of Daniel Lévi, his wife Sandrine announced on social networks the date and place of his funeral.

Known in particular for having played Moses in the musical “The Ten Commandments” or for the Aladdin song “Ce rêve bleu”, singer Daniel Lévi died at the age of 60 following cancer. . His funeral will take place at the Saint-Pierre Jewish cemetery in Marseille.

Benjamin of a family of seven children, Daniel Lévi spent his childhood in Lyon and studied the piano for ten years. He began his career in the early 1980s with a first album, “Cocktail”, which did not meet with the expected success.

After several prestigious collaborations, such as those with Gloria Gaynor, who engaged him in the first part of his European tour, or Michel Legrand, who offered him to record songs from the soundtrack of the film “Parking” by Jacques Demy (1985) , Daniel Levi participated in his first musical in 1991.

Following the announcement of his disappearance, many celebrities did not fail to pay him a last tribute and to send a message of compassion. “I am very sad to learn at the moment that Daniel Levi left us. I think very strongly of his loved ones. He was an immense talent and an example of humility. We will miss him. My sincere condolences to his family”, posted Cyril Hanouna.

Jean-Pierre Foucault also went there with his words of support. “Prayers for Daniel Lévi, simple, talented, may he rest in peace”.

Elie Chouraqui, the director of the Ten Commandments, also split a message of heartbreaking sincerity: “I loved you, I love you. And I will love you”.

Pascal Obispo joined this rain of tributes: “A man, a voice, a brother, our brother is gone (…) I’m looking for the words, I can’t find enough beautiful ones . It was big, it was good, it was us,” he posted.

“Daniel Lévi was a voice, singular, powerful. Fights too: climate, caregivers, fight against racism, support for Lebanon, he never hesitated to commit himself to making the world a little better. All my condolences to his family and loved ones,” Culture Minister Rima Abdul Malak tweeted.

On Saturday evening, Sandrine split a sober message on Instagram to announce her funeral. “My husband, my king Daniel Haim ben Sarah Lévi has joined the Gan Eden. The vigil is taking place at the Synagogue de la Rose this evening and the burial will take place in Marseille, at the Jewish cemetery St Pierre – 166, chemin de l’ Army of Africa 13010 Marseille – tomorrow Sunday August 7 at 2:30 p.m. “, she published, accompanying the message with a black and white portrait of the deceased.