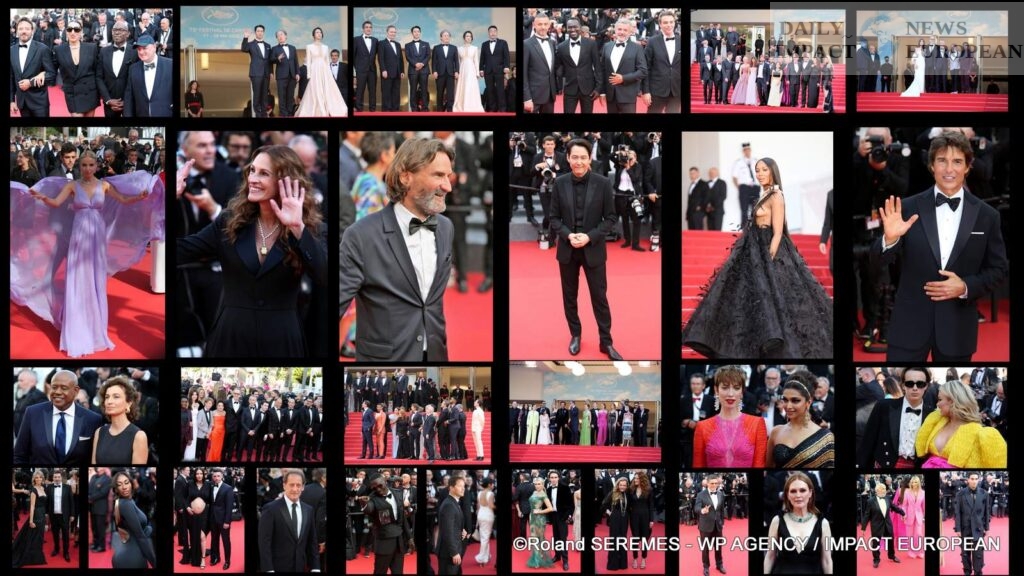 After twelve days of competition for the 21 feature films selected, the jury of the Cannes Film Festival 2022 chaired by Vincent Lindon awarded its prizes this Saturday, May 28 during a closing ceremony hosted by Virginie Efira. And to designate the successor of Titanium by Julia Ducournau.

After twelve days of competition for the 21 feature films selected, the jury of the Cannes Film Festival 2022 chaired by Vincent Lindon awarded its prizes this Saturday, May 28 during a closing ceremony hosted by Virginie Efira. And to designate the successor of Titanium by Julia Ducournau.

Tom Cruise climbed the stairs for Top Gun: Maverick, under the panache of the Patrouille de France. Helen Mirren and Andie MacDowell offered a waltz on the steps of the red carpet. After two weeks of lavish celebrations, the curtain has just fallen, this Saturday, May 28, on this 75th edition of the Cannes Film Festival. The jury chaired by Vincent Lindon, and made up of Rebecca Hall, Noomi Rapace (Millennium), Ladj Ly and Jasmine Trinca has thus unveiled its 2022 winners.

“Each of the films in this remarkable selection gave rise to fascinating and passionate discussions, enriching and exhausting, instinctive and thoughtful, but above all useful since our decisions were all obtained with a good majority”, declared Vincent Lindon before revealing the big winners of the official selection. The jury prize was thus won by two nominees: Eo by Jerzy Skolimowski and The Eight Mountains by Charlotte Vandermeersch and Felix Van Groeningen. South Korean actor Song Kang-ho (Parasite) received the Best Actor Award for Les Bonnes Etoiles, while Iranian Zar Amir Ebrahimi was crowned Best Actress for her role in Holy Spider, by filmmaker Ali Abbasi. The actress also delivered a strong speech by thanking “her people” and evoking her “very long” journey to get there, including a certain number of “humiliations”.

This year, the Swedish director Ruben Östlund won the Palme d’or for Without filter, or Triangle of Sadness in VO. The film is an enjoyable satire that shatters the codes of modern society by following a couple of influencers and models on a luxury cruise where nothing goes as planned. This is the second Palme d’or for the 48-year-old filmmaker who had already won the precious trophy in 2017 for The Square.

Among the other awards of the evening, Iranian actress Zar Amir Ebrahimi won the Best Actress award for her role in Ali Abbasi’s thriller Holy Spider (The Nights of Mashhad), while South Korean actor Song Kang-ho leaves with that of male interpretation for Les Bonnes étoiles by Japanese Kore-Eda.

Directors Charlotte Vandermeersch and Felix Van Groeningen (for Les Huit Montagnes) and Jerzy Skolimowski (for EO) share a jury prize ex aequo. While a special 75th anniversary prize was awarded to brothers Jean-Pierre and Luc Dardenne for Tori and Lokita.

All of these awards were presented in front of an audience of celebrities. A few minutes before the start of the closing ceremony, the French Guillaume Canet or Camille Razat walked the red carpet. Also present were Javier Bardem and Diane Kruger, in a sculptural silver dress, and her husband Norman Reedus (Walking Dead), as well as Anna Mouglalis. The latter had the right words to describe this 75th edition: a section which, as usual, brilliantly celebrated the 7th art and creation.

See you in 2023 for the 76th edition with Iris Knobloch the first woman president of the Cannes Film Festival, elected on Wednesday March 23, she will take the helm of this institution of international cinema on July 1, 2022, for a period of three years.