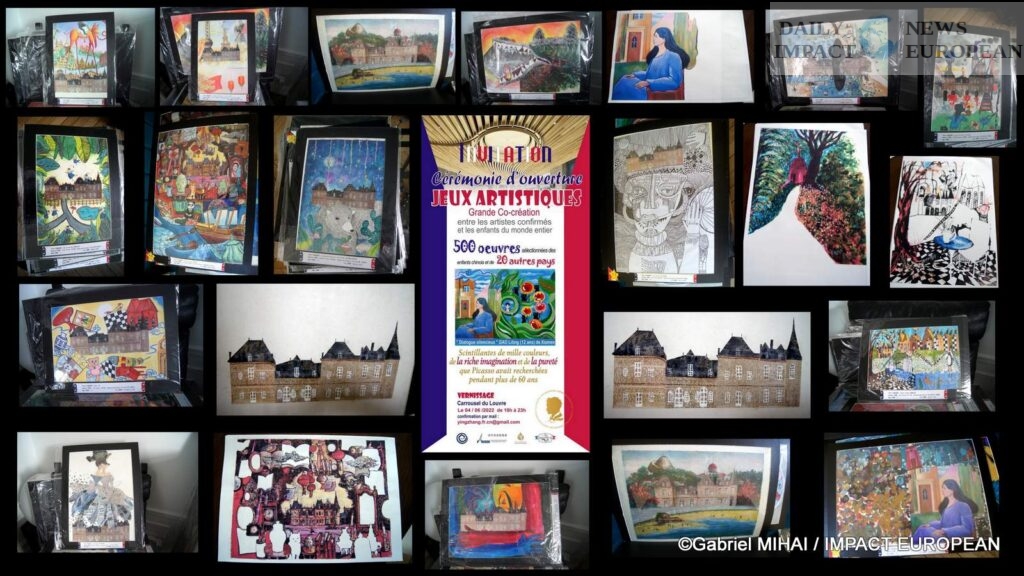 The first edition of the Artistic Games will be held for the first time in France on June 4 and 18, 2022.

The first edition of the Artistic Games will be held for the first time in France on June 4 and 18, 2022.

The event is divided into 2 parts, the opening in Paris on June 4 at the Carrousel du Louvre and the auction on June 18 at the Château de Swann in Illiers-Combray in Eure-et-Loire (28). The profits will finance a retirement home for the Cotention cows who produce the “Normandy 1905” milk, exported to China.

Still a few days before the opening of the JA (Artistic Games), a project initiated by the writer and businessman Ya Ding, also owner of the “Sineterie” since 2016. At the center of this adventure, the co-creation between children of the world, of all cultures, and 5 confirmed artists; Sophie Sainrapt, Emmanuelle Renoir, Christophe Ronel, Augusto Foldi and Malgorzata Paszko.
During the European Heritage Days 2021, each of them was invited to present a work on the theme of Swann Castle and its park. The creations had to be unfinished so that the children could complete them according to their imagination and talent.

Co-sponsored by the World Federation of UNESCO Clubs and Associations (WFUCA) and the Association for the Promotion of France-China Exchanges (APEFC), the exhibition is the kick-off in France of the international tour of creative works which took place in nearly 20 countries including China, France, the United States, Canada, Japan, South Korea, Belgium, the United Kingdom, Germany, Italy, Greece, Brazil, Romania, Mexico, Lebanon or Senegal…

What are JA (Artistic Games)?

For this first edition, the project started in China with the participation of 60,000 Chinese children, then extended internationally. The teachers pre-selected works, 500 of which were sent to Paris for the opening of the Carrousel du Louvre on June 4.
The children had to fill in the blanks left by the artists, while being guided by the videos that the masters shot to explain their technique, their inspirations and give indications to guide them.

Awarding of the Swann Trophies

After receiving the works in France, a jury made up of personalities from the artistic and literary world will pre-section several paintings according to age groups. It will award the Swann Trophies based on an artistic and technical score to each of the selected works. The top 20 will receive a medal and a diploma.

A second selection called “of best consideration”, will be made by personalities outside the Fine Arts (engineers, doctors, writers, journalists, scientists, lawyers…). The selection will be made according to the theme (dreaming, enthusiasm, turbulence, melancholy, vivacity, extravagance…).

All participants in the Asian Games will receive a prize in the form of a Swann Talents certificate.

Property of the French writer and businessman, of Chinese origin, Ya Ding, the Château de Swann was originally called Château de la Sinetterie. This name change is linked to the current owner who wanted to pay homage to Marcel Proust, who came to play in the estate with the owner’s son, Lucien. The castle is located not far from the house of the writer’s aunt, called Léonie in her novel.

Built by Germain Vallorant in 1850, it is inspired by Napoleon III and is surrounded by a forest Calvary as well as a chapel painted red, named St Pierre. It was on the advice of Marcel Proust’s father that Louis Fénelon became the first buyer of the Château de la Sinetterie. When she died, her daughter moved there with her son Lucien in 1872. In the 3-hectare park, she added an oriental-inspired garden with a pond, a Chinese pavilion and flowerbeds.
After 2 years of work, Ya Ding brings the castle back to life by collecting period furniture, paintings and documents and making a short film. He opens the place to the public thanks to the collaboration of the art and musicology historian, Jean-Yves Patte.

In July 2021, the town of Illiers-Combray, which bears this name linked to the imagination of Marcel Proust since 1971, celebrates the 150th anniversary of the birth of the writer and the 100th anniversary of his death. The new owner of the castle chose this date to inaugurate his castle which becomes a museum to promote Marcel Proust and his work internationally.

Occasional activities related to cultural life (shows, readings, conferences, seminars) are organized there as well as in the surrounding area.

La Sinetterie is also the headquarters of the Association des Chercheurs du Temps Perdu. It is a meeting place between creators and their guides.

Who is Ya Ding?

It is said of him that he is “The most French of the Chinese who works for the rapprochement of peoples.”

Originally from a city in northern China, Ya Ding followed his parents to the countryside when he was only 10 years old. He is sent to work in the fields, after his secondary studies, within the framework of the “Movement of sending zhiqing to the countryside”. He created the first student magazine at Peking University after the Cultural Revolution and became a translator of French authors. He won the international translators competition.

He arrived in France in 1985, in love with French literature and culture, and began to write in French. The French Ministry of Culture and Communication awarded him the prize for young French translator. His works have been translated into English, German, Spanish, Japanese, Italian, Portuguese and Danish.

His novels are autobiographical in inspiration and have won several awards. In 1987, he was a finalist for the Goncourt Prize and received the Cazès Prize for “Le Sorgho rouge”, a novel which recounts his initiatory itinerary in Mao’s China. The book sells a million copies and wins the Asia Prize.

“The heirs of the 7 kingdoms, his second novel won the Discovery Prize of the French PEN club in 1988 and the Summer Prize in 1989. “The game of water and fire” received the Counterpoint Prize in 1991.

A regular on the program “Apostrophes, Chevalier de la Légion d’Honneur, Ya Ding is also a businessman and media man. He hosts “Paris Sensations” on Beijing Television and “France Rendez-vous” for Chinese TV in Travel.

At the same time, he founded the Association for the Development of France-China Exchanges. He is the head of the company Y.D. Communication that accompanies the entry of major French groups into the Chinese market, including L’Oréal, Nestlé, Carrefour, EDF and Véolia.

The promotion of peace and freedom entering into its humanist approaches. He founded “The International Academy of Arts of France” in connection with institutions such as the Cours Florent, the CLCF OR the ESRA to organize stays and the training of Chinese students in France. Conversely in 2016, 45 young French artists saw their works exhibited at Long Zu and Tucheng.

In 2022, his choice fell on childhood by inviting students from all over the world to confront each other during the Artistic Games in Paris and at the Château de Swann.

The opening will take place on June 4 at the Carrousel du Louvre from 6 p.m. to 11 p.m. A meeting between 350 Parisian children and confirmed artists will be held at the beginning of the afternoon. They will be able to admire the works of the selected children and discuss with the artists. On this occasion, a fresco will be produced on the theme of peace.

Ya Ding chose her castle as the theme and inspiration for the young people who take part in the
first Artistic Games. This is why he decided to organize the auction of the 500 works co-created by Chinese students and elsewhere. The sale will take place on June 18 and will be hosted by Maître Jack – Philippe Ruellan in the grounds of the Château de Swann. The profits will finance a “Retirement home” for Cotentin cows who produce “Normandy 1905” milk exported to China.

With more than 116 years of know-how, Normandie 1905 is committed to food safety by guaranteeing quality made in France. Farmers come together in a cooperative to sell their milk at the best price and transform it into cream, butter or yoghurt.

Since 1986, the cooperative has benefited from new technology in its ultra-modern processing plants to produce one of the best milks in the world. The brand also has certificates that guarantee its quality in France and abroad where it is exported (China, Great Britain, continental Europe).

It is thanks to the quality of their milk that the cows will be able to benefit from a well-deserved retirement in the retirement home which will be built for them with the money raised during the auction on June 18 at the Château de Swann.