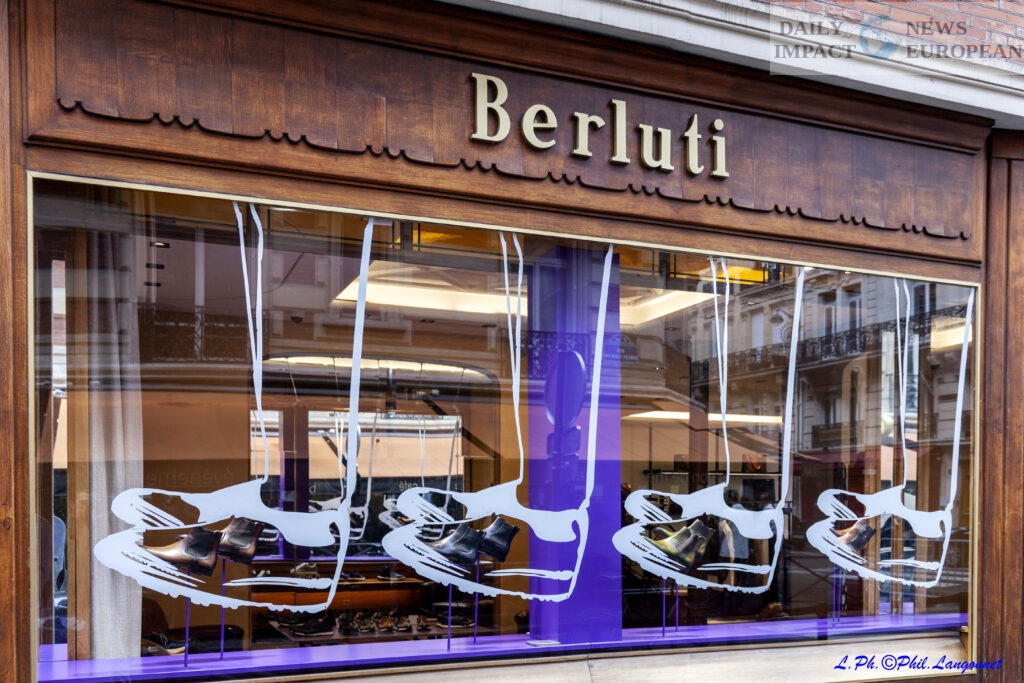 Located not far from the "most beautiful avenue in the world", the Berluti house is one of the jewels of the LVMH group (Louis Vuitton, Moët-Hennessy). Taking part in the Journées Particulières LVMH, the boutique on rue Marbeuf (75008) has chosen to open its doors to the public to reveal some of its secrets.

Located not far from the “most beautiful avenue in the world”, the Berluti house is one of the jewels of the LVMH group (Louis Vuitton, Moët-Hennessy). Taking part in the Journées Particulières LVMH, the boutique on rue Marbeuf (75008) has chosen to open its doors to the public to reveal some of its secrets.

Berluti is a French company founded in 1895 by the Italian Alessandro Berluti. It manufactures shoes and men’s leather goods

Alessandro Berluti was born in 1862 in Senigallia, a village by the Adriatic Sea. He learns the craft of cabinetmaker and acquires know-how for working with leather.

At the age of 19, he left Italy for France, spending several years on the road alongside a troupe of actors for whom he made stage souls. In 1895, he moved to Paris as a bootmaker. The Universal Exhibition of 1900 in Paris is an opportunity for Alessandro Berluti to expand his clientele. He created models for prominent personalities of the time such as Isadora Duncan, Héléna Rubinstein and Elizabeth Arden.

After the First World War, he offered the “Oxford” model to lovers of luxury shoes. This model is made from a single piece of leather, the seams are not visible thanks to 3 eyelets. These shoes are polished resulting in a shimmering color that is reminiscent of a mirror. For these qualities, the Duke of Windsor becomes one of the company’s clients.

In 1928, his son Torello succeeded him, he opened a boutique-workshop rue du Mont Thabor (75001) under the name “Berluti, luxury shoemaker”. After the Second World War, the boutique, which had become too small, was sublime at 26 rue Marbeuf (75008), following the expropriation of the Jewish bootmaker, Maxwell.

In 1959, Talbinio Berluti launched “luxury ready-to-wear”, thus broadening his clientele. He is joined by Olga Berluti, née Squeri, who learns the trade of bootmaker alongside him. In the early 1960s, he sold abroad and counted Warhol, Truffaut, Cocteau, Yul Brynner, Yves St Laurent, Marcel Achard and Claude François among his clients.
In 1970, Olga succeeded Talbinio in the management of Berluti and was Artistic Director of Berluti from 1961 to 2001. Today Artistic Director of the Berluti Art Line, she has enabled the modernization of the house and its growth. Despite the acquisition of Berluti by LVMH in 1993, she remained artistic director until 2011. She was awarded the title of Chevalier de la Légion d’Honneur in 2012 by Bernard Arnault, following the international development of the house thanks to the thirty boutiques worldwide (3 in Paris, Cannes, Europe, Middle East, New York and Asia)

In July 2011, the Italian Alessandro Sarfori, former director at Ermenegildo Zegna for 14 years, took over the artistic direction of the house. In January 2012, the first collection of garment making comes with 400 pieces. Following the takeover of the “Arnys” suit by LVMH, a line of made-to-measure suits entitled “Berluti by Arnys” appears. A few months later, Anthony Delos joined the LVMH seraglio.

From September 2016 to April 2018, Haider Ackermann becomes artistic director. He was then replaced by Kris Van Assche.

Notoriety in all areas

The Berluti brand is also known in the cinema as in the film “L’Affaire Dumas” in the 90s, about the scandal around the former minister, where we discover a pair of boots.

Thanks to this notoriety, Olga was nominated several times for the Césars. She received the prize for best costume for the film “Harem” by Arthur Joffé, in 1986. She won a David di Donatello prize for the film “Farinelli” in 1995.

Since 1992, we also find the Berluti brand for a marketing event, “Le club Swann” which takes its name from the character of Marcel Proust and met for the first time at the Hôtel Crillon. It offers its loyal customers, once a year, a group skating session.

The notoriety of the Berluti house is also linked to the manufacture and its quality, particularly the Venezia leather. Whether made-to-measure or “ready-to-wear”, Berluti shoes are presented “raw” then coated with a specific patina, made up of essential oils, shoe polish and water and similar to Japanese lacquer . Each shoe requires 250 operations carried out in a workshop. Since the 1960s, Olga Berluti has offered leather as an extension of the skin, different forms of tattoos, piercings or scarifications adorn the creations.