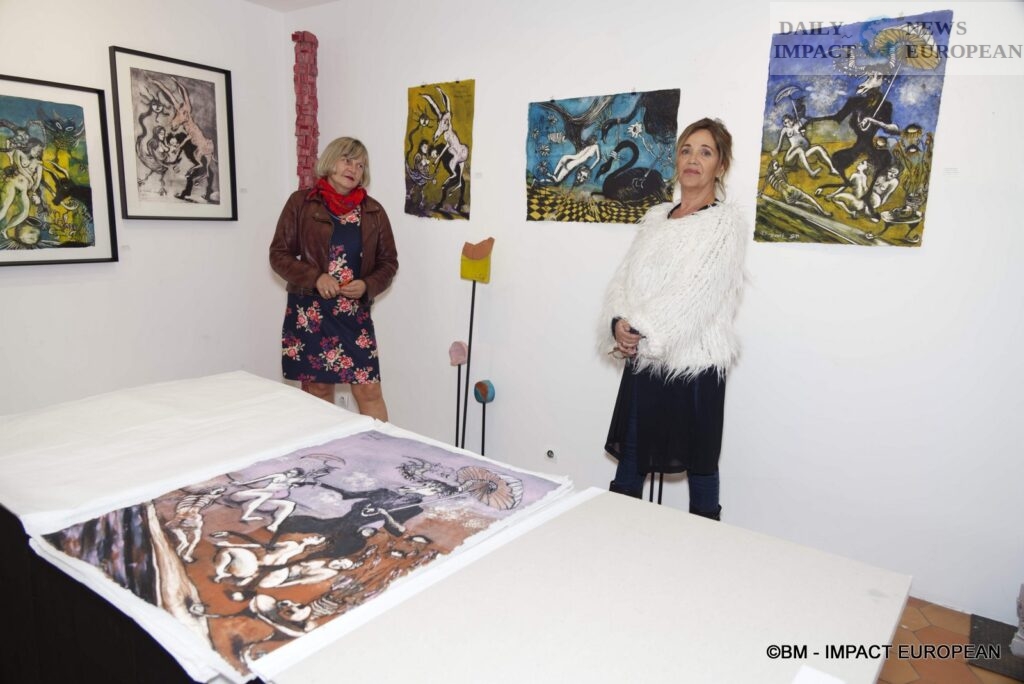 The artists Emmanuelle Renard and Sophie Sainrapt exhibit their works at the Terrain Vagh gallery from October 5 to 22, 2022 (75005).

The artists Emmanuelle Renard and Sophie Sainrapt exhibit their works at the Terrain Vagh gallery from October 5 to 22, 2022 (75005). They presented original engravings, ceramics and 4-hand works specially produced for the exhibition according to the suggestion from the “Terrain Vagh” gallery.

To get to know the works better, the 2 artists were at the gallery during the 2 openings which took place on Wednesday 5 and Saturday 8 October.

This exhibition was entitled “Disparates” (in French Folies) Games and Footprints, and paid homage to the painter Goya and to the series of engravings he had made in aquatint and drypoint between 1815 and 1823, depicting strange scenes, both related to violence and sex. Critics of political institutions, they reveal the wounds and disasters of the occupation of Spain by Napoleonic troops in 1808.

Passionate about Goya, Emmanuelle Renard (daughter of James Coignard) and Sophie Sainrapt were able to show the mixture between engraved and ceramic works, it is an alchemy between the unconscious, body and matter, comprising drawings, engravings, inks, impressions, scrapings and paintings… The result is poetic and original scenes populated by unusual characters and creatures.

Portrait of the artists

The meeting between Emmanuelle and Sophie dates back to the 2000s in the Pasnic engraving workshop where many renowned artists come to engrave, print and discuss with the 2 founders Pascal Gauvard and Nicolas du Buisson and learn about the carborundum technique. this technique taught by James Coignard and the friendship that reigned in the workshop produced a real “Pasnic Spirit”, generated by the 2 artists. In June 2022, they participate in the first edition of the “Artistic Games”, a project imagined by Ya Ding, a French writer of Chinese Chinese origin, around the Château de Swann, in the company of Augusto Foldi, Christophe Ronel and Malgorazta Paszko. Each child had to complete the works of the 5 artists in this inter-generational and inter-cultural competition.

Born in 1963, Emmanuelle Renard is the daughter of painter James Coignard. She grew up in a family of artists in the region of Vallauris (83) and studied art at the Villa d’Arson in Nice. In 1985, she presented her first personal exhibition in Vallauris then moved to the capital in 1986. Since then, this painter, designer, engraver and ceramist has exhibited all over the world: Paris, Hamburg, Frankfurt, Karlsruhe, Brussels Copenhagen, Geneva, Basel , Stockholm, Chicago, Los Angeles, Beirut…

His painting is expressionist and surreal full of bright colors (yellow, red…) of strength and power. The objects seem to come to life there, improbable scenes shelter strange characters. His inspiration comes from the Baroque painters, from Goya, Soutine, Chagall and Rebeyrolle. French figurative artist, she has been dressing French collectors and elsewhere for thirty years. Its goal is to “make something alive”, to represent life in all its forms while avoiding the sublime and the ridiculous, the normal and the grotesque.”

Born in 1960, Sophie Sainrapt is a French painter, graduated in DEA of political studies which will lead her to the Senate. At the same time, she represented painting and sculpture at Hashpa and Ain Marie. In 1995, she opened her own Paris studio as a protean artist, praising the female body with sensitivity and lyricism. She uses different techniques: stamped drawing, ceramics, engraving, linoleum… With a sensitive gaze, she sketches a coat of arms of the female body. Sophie Sainrapt illustrates numerous bibliophilic works (around Eros and its gardens of delights). Among them, we note: the Pasnic, Renard Pale and Area editions… She signs the illustrations of Paul Verlaine, Jean de la Fontaine, George Bataille, Pierre Louys, Christian Noorbergen… She exhibits in many Parisian galleries but also internationally : in Korea, in China, in Japan or in Brussels…