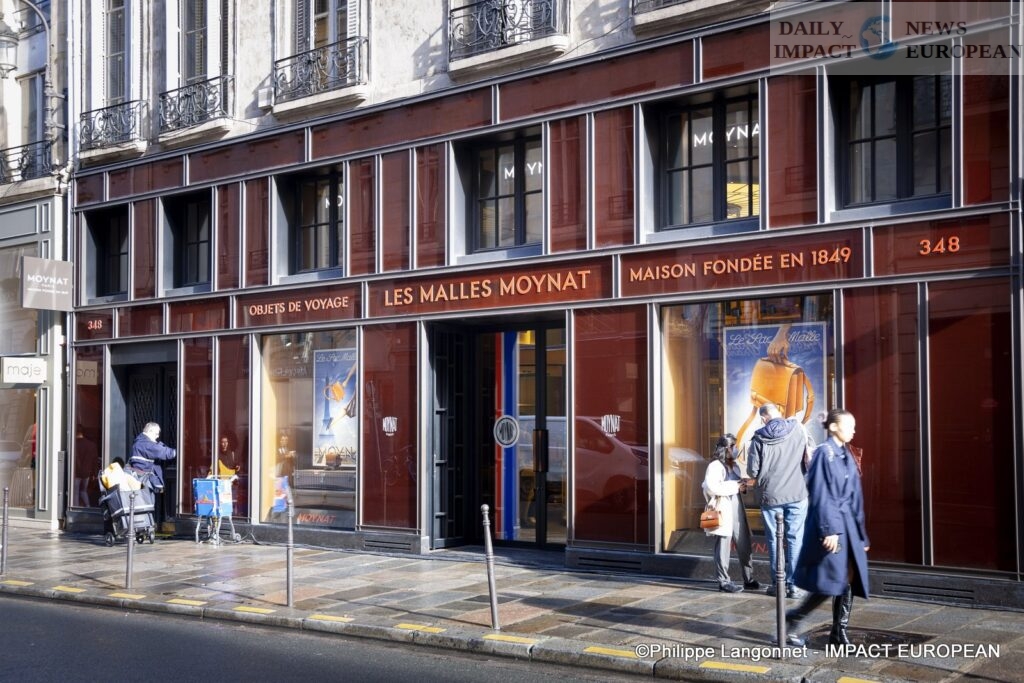 For its Journées Particulières, LVMH opened the doors of the 93 companies that belong to it around the world, in order to highlight the crafts and their know-how. Among them is the Moynat Trunk and Leather Goods Workshop, located rue St Honoré.

For its Journées Particulières, LVMH opened the doors of the 93 companies that belong to it around the world, in order to highlight the crafts and their know-how. Among them is the Moynat Trunk and Leather Goods Workshop, located rue St Honoré.

In 1849, Octavie and François Coulembier, layetiers-packers, founded the Moynat factory, rue Capron (75018). Subsequently they joined forces in 1869 with Pauline Moynat who sold travel items in her first shop on the avenue de l’Opéra,

The house quickly became one of the big names in luxury leather goods of the time, thanks to its traditional know-how in the production of its made-to-measure items. To date, it is one of the oldest trunk makers, having become famous for its creations for the automotive world and its innovations which made the patented trunks lighter and waterproof thanks to the canvas which it created in 1854 but also his participation in various universal exhibitions. (Paris 1867 or Ghent 1913 where she received her first 2 prizes)

The first workshop was born in 1849, using the tradition of layetiers, workers who make chests, wooden boxes generally used as packaging. The principle is to nail to the cover small battens in flattened wood, without knots, similar to the wood chosen on the box. In 1873, Moynat invented the first English trunk with a wicker frame, covered with waterproof canvas and adapted to rail transport standards. For her part, Pauline Moynat created in 1878, the first line of ladies’ handbags, “les Mignons”, with a chamois leather lining. Thanks to a first participation in the 1898 Motor Show and an advertising campaign, Moynat diversified with the creation of a car travel bag (1899).

The 20th century seen by Moynat

the “Limousine” trunk with a curved bottom and adapted to the bodywork, thanks to 5 patents (1902), the drop trunk whose runners allow it to be raised and prevent humidity and damaging the roof of the car (1904) . The collaboration with the artist Henri Rapin in 1906 allows the realization of the first illustrated luggage label.

The construction of a new factory, rue Coysevox (75018) on 5 floors begins in 1907, it employs nearly 250 craftsmen, 2 years later. It was in this factory that the extra light and unbreakable trunk was invented (1910). The house exhibited 2 years later in London, a trunk with footrest and concealing a rolling table (1912). In addition, all Moynat trunks are equipped with a hood envelope, a waterproof cover to protect luggage. (1914). The 1920 Moynat canvas with monogram imagined by Henri Rapin, is the repeated initial M which will become the signature of the house. (1920). Henri Rapin then created the trunk in red morocco leather with a frieze of nails encircling palm leaves in blue leather, a symbol of leather marquetry which received the certificate of honor and 13 medals at the International Exhibition of Decorative Arts and Modern Industrialists of Paris (1925). The new car trunk was invented 2 years later, it is characterized by side loading (1927).

Moynat has also offered a large selection of toiletries, small leather goods, textiles, stationery products and tableware. This is how we discover picnic trunks, buffet cases and tea baskets. The house also invented the Hold All, clothes racks formed by a large canvas in which blankets and coats were rolled, made in several sizes and materials, such as leather, tan canvas lined with leather, canvas coated with gutta -percha and Scottish designs. Indeed, the Moynat house offered custom colors and lacquered each car trunk in the tone of the bodywork. She also made trunks with beige stripes (1860-1870),

In 2010, Bernard Arnault acquired the rights to the Moynat brand, extinguished in 1976, via the LVMH group. This revival is orchestrated by Guillaume Davin, former manager of Louis Vuitton Japan, who becomes its CEO. The creation is attributed to Ramesh Naïr, formerly at Hermès A first store was opened in 2011 at 348 rue St Honoré in Paris, 500 m from its historic store. A second appears. In March 2014, in London at 112 Mont Street in the Mayfair district. At the same time, Moynat can be found at Galeries Lafayette and Bon Marché, as well as in major Asian cities (Tokyo, Seoul, Hong Kong, Beijing) with the opening of various corners in department stores such as Isetan, Landmark or Yintai.