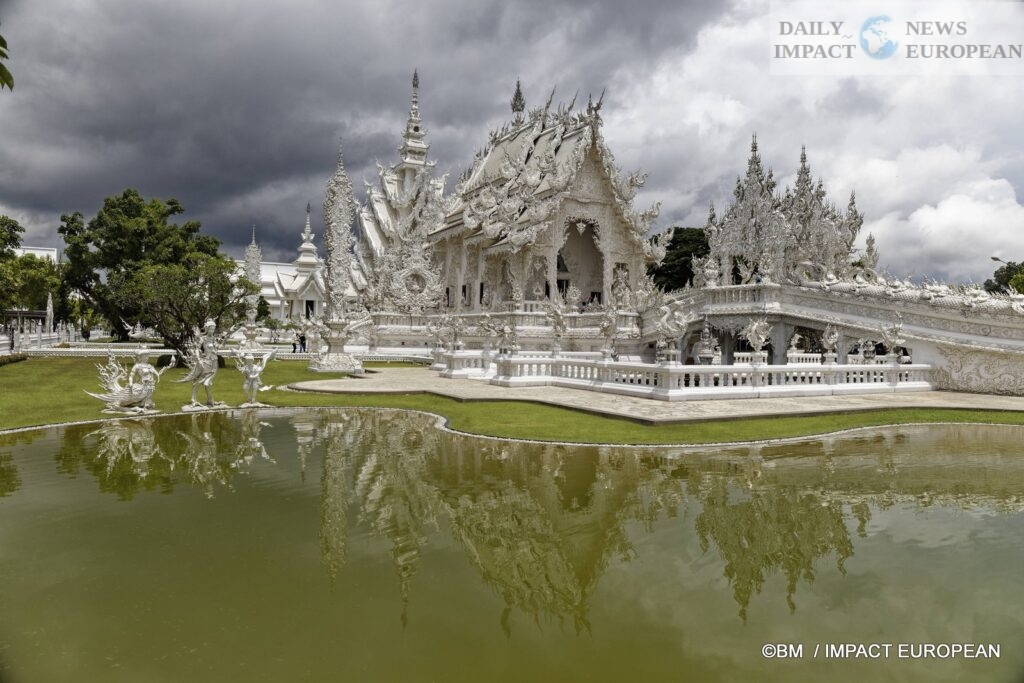 Thailand, the ancient kingdom of Siam, has many palaces and temples, spread across the country. They are characterized by the gold covering most of them.

Thailand, the ancient kingdom of Siam, has many palaces and temples, spread across the country. They are characterized by the gold covering most of them.

Among the unmissable temples, Wat Rong Khun, also called “White Temple”. Located in the north of the country, on the borders of Laos and Myanmar (ex-Burma), it is 13 km from Chiang Rai, a city in the mountainous province of the same name.

Renovation of the old temple

The white temple represents spirit, purity, religion and refers to popular culture. To obtain pure whiteness, the artist has embedded pieces of mirror in the building. He wanted to demonstrate the purity of Buddhism embodied by the whiteness of the building and the illumination by the mirrors which reflect the rays of the sun, giving a glittery effect to the building. It is a demonstration of spirituality through symbols.

Another singularity of the White Temple, nods to Pop culture although considered irreverent. There are characters related to the culture of Pokémon.

The current building was created in 1997 with Thai artist Chalermchai Kositpipat’s own money. This is the renovation of the old temple which had been falling into ruin since the end of the 20th century. It is a tribute to King Rama IX, and his hometown, Chiang Rai. King Rama IX, whose real name is Bhumibol Adhulyadej, reigned over the country between 1950 and 2016, the year of his death at the age of 88. It was the longest reign in the country’s history.

To date, the artist has spent more than 40 million baht but the project should not be finished before 2070, since there are 9 buildings on the site. In addition, the temple suffered major damage following the earthquake in May 2014. However, the structure being solid, the restoration was rapid and it is once again open to the public.

Description of the temple

Access to the temple is via a bridge over a small lake. The “Bridge of Rebirth”, as it is called, sits above hundreds of hands, those of those who could not resist temptation, greed and desire. Some hands bear human skulls, others are curled up or seem to want to ask for help: this stage represents hell.

The “Bridge of Rebirth” therefore symbolizes the passing of the cycle of death and subsequent rebirth. The being is freed from suffering, overcoming temptations, greed and desire.

Near the lake, we discover 2 half-human, half-bird creatures, taken from Buddhist mythology (kinnara)

After the bridge, we arrive at the “Heaven’s Gate”, with an entrance guarded by 2 divine creatures, Death and Rahu, who decide the fate of the dead. We find ourselves in a morbid universe where even the red or white studs delimiting the place are overhung by red skulls.

We then arrive at the main building, named uboshot or building dedicated to certain religious rites such as the ceremony to become a monk or novice. (Photos are prohibited there). In this room, there are representations of Buddha, painted and sculpted or in meditation, but also effigies from the universe of Pokémon such as Pikachu, Charmander, Hello Kitty, Harry Potter, Matrix and Mr Anderson, Marvel and Spiderman, Dc and Superman and many more.

The temple, of classical Thai architecture, features a three-tiered roof and the use of numerous Naga serpents. Inside, the decor is made of paintings representing flames and demonic faces, Western idols such as Michael Jackson and images of destruction, etc… All these representations have the message that the world is only an illusion. due to human wickedness.

The golden building represents the body, unlike the white temple which embodies the spirit. It is the image of material things and possession. The presence of gold characterizes worldly desires and money. We discover with surprise that this building is none other than the toilets.

Other curiosities are to be discovered in this temple like the wishing well where people can throw a coin by making a wish, hoping that it lands exactly in the middle. There are also the trees with golden leaves hanging from them and the ceiling of the covered walkway filled with these same leaves which are wishes and names of the donors.

Shops and a gallery

The site offers its visitors the opportunity to refresh themselves and eat thanks to cafes and restaurants. The souvenir shop allows you to immortalize your visit to the White Temple.

To admire the work of Chalermchai Kositpipat, a gallery is dedicated to him. His first paintings, made when he was 14, are exhibited there, as well as pieces marking his particular style, around religion and power.