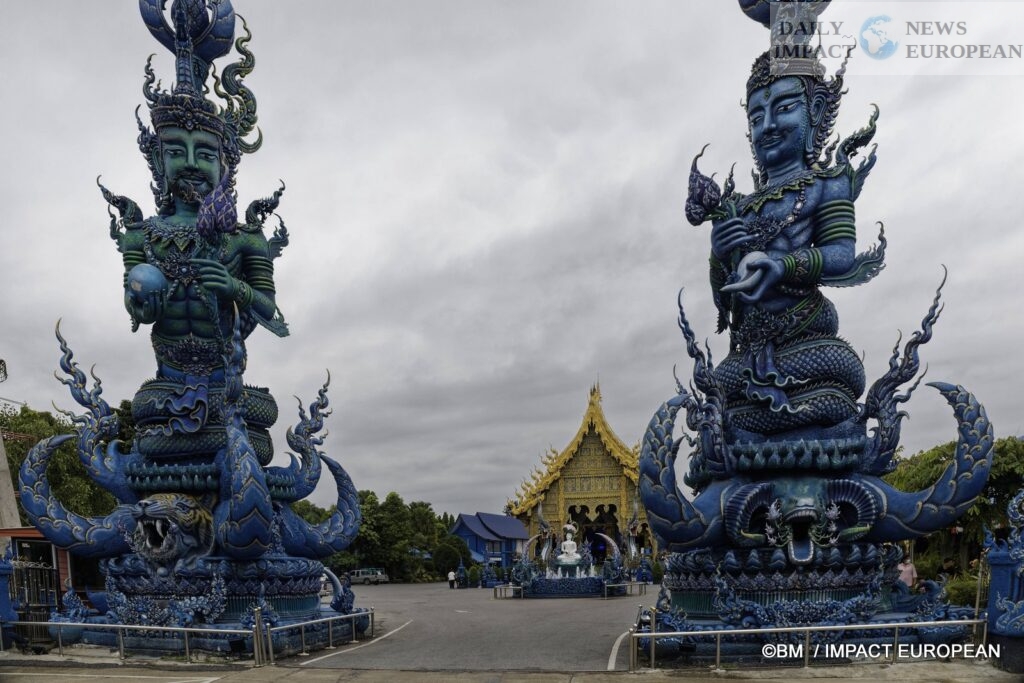 Many temples exist in the province of Chiang Rai, located in the north of Thailand. After visiting Wat Rong Khun, located 13 km from the city of Chiang Rai, let's continue our journey in the region to discover the "Blue Temple", also called "Wat Rong Suea Ten" or "Dancing Tiger".

Many temples exist in the province of Chiang Rai, located in the north of Thailand. After visiting Wat Rong Khun, located 13 km from the city of Chiang Rai, let’s continue our journey in the region to discover the “Blue Temple”, also called “Wat Rong Suea Ten” or “Dancing Tiger”.

Located in Rong Suea Ten village, Rimkok district, 3 km from the center of Chiang Rai and close to the Kok River, where tigers lived and bathed.

History of the “Blue Temple”

The color of the Blue Temple is similar to that of sapphire. It covers the temple walls, the roof and the statues around it, whereas most temples are made of gold. This color symbolizes purity, wisdom and the absence of materialism advocated by Buddhists.

The “Blue Temple” already existed, 80 or 100 years ago. Fallen into ruins, it was renovated following a decision by the villagers in 1996 to build a new place of worship to accommodate gatherings.

The first stones were laid in 2005 and the inauguration of the ordination hall, the uboshot, took place in 2016. There is a white Buddha, built in 2008.

The Blue Temple was designed by Putha Kabkaew, a student of Chalermchai Kositpipat who built the White Temple in Chiang Rai. It is a blend of traditional Buddhist values ​​and classic Thai architecture with contemporary choices.

The name given to the temple comes from the golden blue color that covers the walls of the ordination hall. The uboshot is guarded by giant blue and purple nagas guarding the entrance. They have a wavy tail with detailed scales. Among Buddhists, nagas are magical serpents that play a role between the divine and the mortal. Behind the snakes is a huge standing white Buddha, next to the chedi (religious building) Phra That Ked Kaew Chula Mani.

Outside, gold trim adorns the temple surrounded by blue and gold statues of magical Buddhist beings and mythological figures. The windows are protected by an angelic figurine on a pedestal with outstretched feathered wings, a stick gripped behind his back. Brightly colored Yakshas or female spirits of nature protect the temple from evil.

Just behind the temple, a Buddha statue stands in an abaya-mudra pose. Its calm air invites visitors to renounce fear and anxiety.

Inside the temple, the white porcelain Buddha statue, seated in the lotus position, is at the back of the room, it indicates spiritual meditation. The walls, painted in golden blue, the color of the universe of Dharma and the moral virtues of Buddha scattered throughout the world, are adorned with drawings and paintings on the life of Buddha in the same contemporary style as those of Wat Rong Khun. It is the image of Heaven covering the Earth. Moreover, we note that there is no representation of a tiger, despite the name given to the temple. it is only their presence in the past. The ceiling is embellished with almost psychedelic patterns.

At the exit of the room, the wall around the door frame represents hell. The open door is the gaping mouth of a demon.

In order not to offend the monks and the faithful, it is better to follow certain rules during the visit: