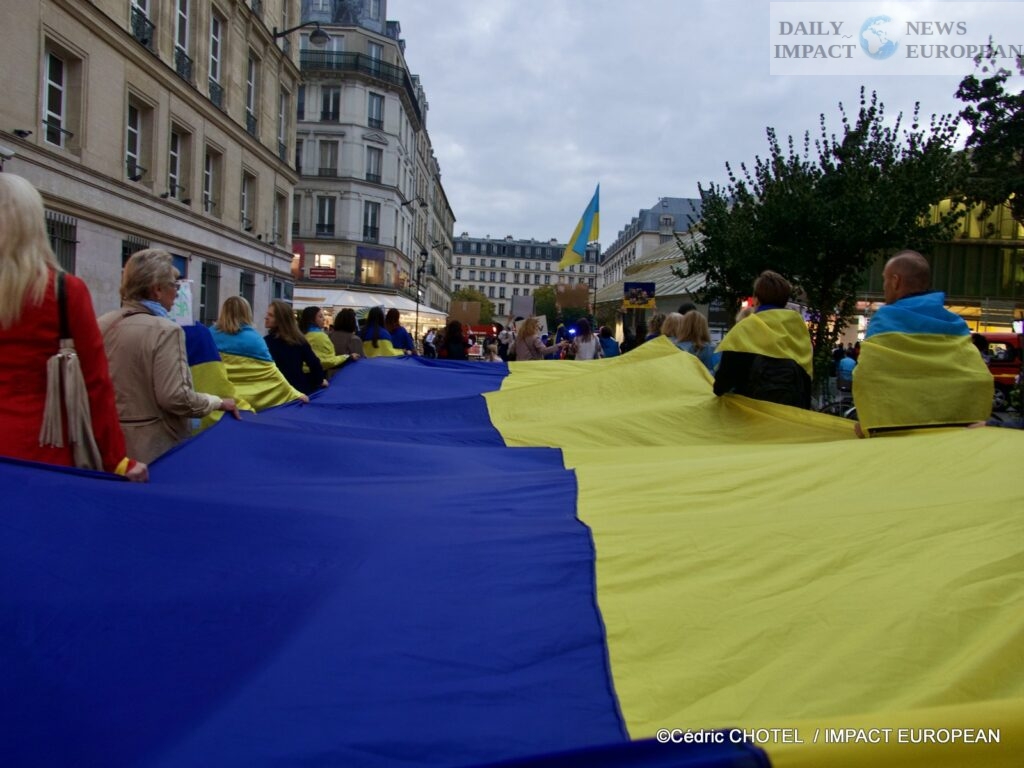 If until yesterday the same language and unity were united between Ukrainians and Russians, today it is war, because the son (Volodymyr Zelensky) refuses to dialogue with the father (Vladimir Putin) after his independence.

If until yesterday the same language and unity were united between Ukrainians and Russians, today it is war, because the son (Volodymyr Zelensky) refuses to dialogue with the father (Vladimir Putin) after his independence.

Volodymyr Zelensky refuses any dialogue with his Russian counterpart Vladimir Putin, in order to find a possibility of peace with the provisions of the agreement signed in the Treaty of Normandy, “as long as Putin is president I refuse any dialogue, (…) little whoever becomes president, I will ask for immediate dialogue, (…) not when it’s Putin (…) I’d better continue the war until my people are free”, announced Volodymyr Zelensky.

After the Russian strikes, Ukraine is not afraid. Volodymyr Zelensky assures this Monday evening that his country will not be “intimidated” by the massive bombardments carried out by Russia, which have affected important energy infrastructures and left at least eleven dead. “Ukraine cannot be intimidated. It can only be all the more united. Ukraine cannot be stopped”, pleads the Ukrainian president in a video broadcast on social networks, promising “even more painful” fighting for Russian troops on the front.

Ukraine accuses Russia of launching Iranian drones from Belarus. The Ukrainian General Staff on Monday accused Russia of launching Iranian attack drones from Belarus, in addition to missile strikes and aerial bombardments by Russian forces over much of Ukraine. “The enemy used Iranian drones of the Shahed-136 type from the territory of Belarus and temporarily occupied Crimea”, indicates the Ukrainian army on Facebook, assuring that nine of them had been destroyed.

Belarus and Russia will deploy joint troops. Alexander Lukashenko accuses Ukraine on Monday of preparing an attack against Belarus, and that as a result Minsk was going to deploy Russian-Belarusian troops, without specifying their location. “Due to the worsening of the situation on the western borders of the [Russian-Belarusian] Union, we have agreed to deploy a regional grouping of the Russian Federation and the Republic of Belarus,” Lukashenko said during a meeting with Belarusian security officials, quoted by the state news agency Belta.

Krisjanis Kariņs believes that a wave of immigration from Russia would pose a risk to European security. The three Baltic countries, Latvia, Estonia and Lithuania, as well as Finland and Poland have already closed their borders to Russians with tourist visas.

Vladimir Putin is convening his Security Council on Monday, which brings together the main ministers, political leaders and representatives of the Russian security services and army. On Sunday, the Russian president accused Kyiv of having organized the explosion which partially destroyed the Crimean bridge linking Russia to the annexed peninsula on Saturday, citing a “terrorist act”.

The European Union has extended “at least until March 2024” the temporary protection granted to Ukrainian refugees due to the war started by Russia, announced Home Affairs Commissioner Ylva Johansson.

She specified that 4.2 million Ukrainians were currently concerned by this status, granted for the first time by the EU, which gives them rights in terms of access to housing, the labor market, the school system and social benefits in particular.

The attacks carried out by Russia on Monday against civilians in Ukraine amount to “war crimes” for which those responsible will have to “account”, according to the spokesman for the head of European diplomacy Josep Borrell. “This is a further escalation which is absolutely unacceptable,” spokesman Peter Stano said.

He also called on the President of Belarus, Alexander Lukashenko, not to allow his territory to be used as “a launch pad for missiles against Ukraine” and to “not take part in the brutal aggression carried out by Russia”, while he accused Ukraine of preparing an attack against his country and indicated that Russian-Belarusian troops were going to be deployed.

Three weeks after Vladimir Putin’s call for “partial mobilization” for the Russians and seven months after the start of the conflict, the first tremors are felt on the French asylum system.

“Since the outbreak of the war in Ukraine, we have clearly seen an upward trend: over the first eight months of the year, the Ofpra has registered 1,420 asylum applications from Russian nationals”, indicates to AFP this body responsible for granting refugee status.

Between August and September, “there is an increase of 17%”, he said, recalling that the mobilization order was issued on September 21, with repercussions which will not be known until October.

The fate and reception of Russians fleeing their country deeply divides Europe, which has offered unprecedented protection to Ukrainian refugees but which, on this issue, is torn between a desire to support the opposition to Vladimir Putin and fears, in particular matters of security.

Germany said it was ready to open its doors but several Baltic countries and Poland were hostile to it, while the European Commission mentioned a “delicate question”.

Finland, bordering, saw the number of entries of Russian citizens double in a few hours after the announcement of the mobilization and also wanted to limit “significantly” these arrivals.

France, she wants to maintain a “reception according to international conventions”, according to the Minister for Europe and Foreign Affairs Catherine Colonna, at the end of September.

“It is believed that around 10,000 (Ukrainian displaced persons) left at the end of September, according to the deactivated asylum seeker allowance cards”, explains the director general of the French Office for Immigration and Immigration. integration (Ofii) Didier Leschi, who delivers the first estimate of this departure movement, nearly eight months after the start of the war in Ukraine.

Putin hopes for a “stabilization” of the military situation

Russian President Vladimir Putin assured Wednesday, October 5 that the military situation will “stabilize” in the Ukrainian territories of which he claims the annexation but where his forces suffer a series of setbacks against the Ukrainian army. A few hours earlier, Ukraine had announced that it was regaining ground in the Luhansk region (east), after its successes in those of Kherson (south) and Kharkiv (northeast).

“We assume that the situation will stabilize and that we can develop these areas peacefully,” Putin said. He signed a decree for Russia to formally appropriate the Ukrainian nuclear power plant in Zaporizhia (south). For his part, the head of the IAEA Rafael Grossi announced his departure for kyiv to discuss the need “more urgent than ever”, the establishment “of a protection zone around [this] power plant.

Even as it retreats on the ground, Russia has proclaimed the annexation of four regions of Ukraine (Donetsk, Luhansk, Kherson and Zaporizhia) which it partially controls, following “referendums” denounced by kyiv and its Western allies.

A sign of disarray in Russia, the military’s setbacks led a senior parliamentary official to call on it to “stop lying” about its defeats.

“Our people are not stupid. And he sees that we don’t want to tell him even a part of the truth. This can lead to a loss of credibility,” said Andrei Kartapolov, head of the Defense Committee of the Duma, the lower house of parliament, and a former military commander.

The presence of a wounded soldier from the front and 2 soldiers’ wives marked the march on Saturday afternoon on a new route from Place de la République to Place de la Nation. The blow to the goal in the morning certainly gave energy to the demonstrators but, by its double symbolic significance, it also increased the risk of a massive response which has indeed taken place since the demonstration.

Yesterday evening, a new meeting of Ukrainian refugees was held in front of the Hôtel de ville in Paris, in which Mr. Melanchon and the Nupes deputies took part, as a sign of solidarity and support for the Ukrainian people.