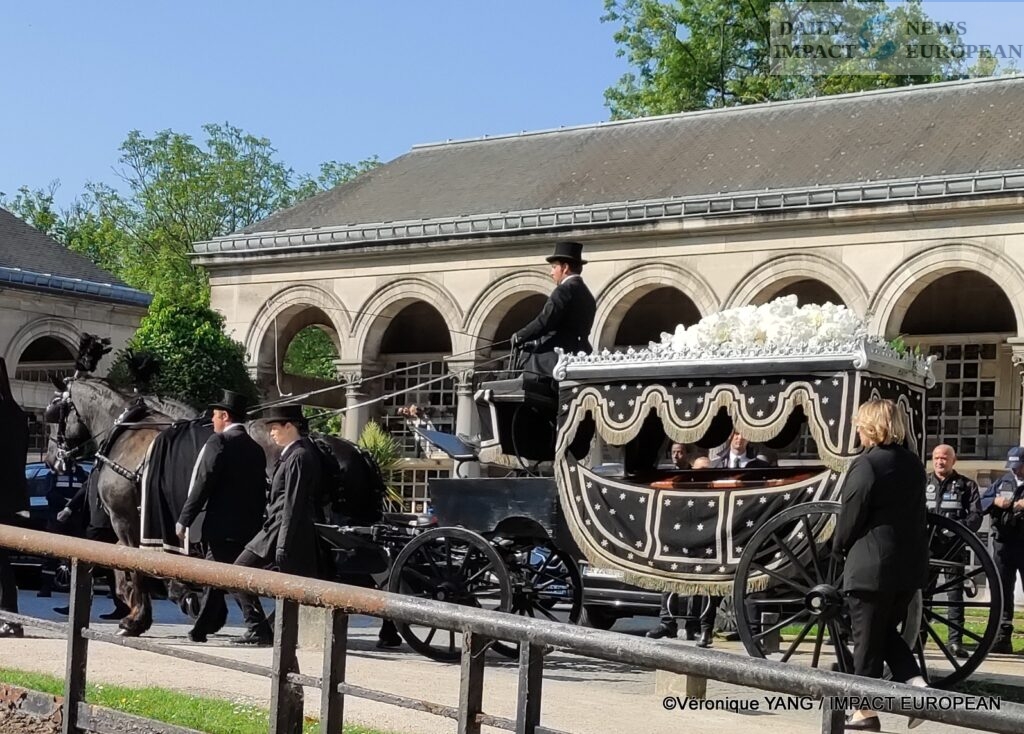 Her funeral took place on Monday 9 at the Père-Lachaise crematorium (75020) in the presence of her family, relatives and friends as well as anonymous people who came to greet her one last time.

The singer Régine died on May 1 at the Maison des artistes in Batignolles, at the age of 92. She joined her only son, Lionel Rotcajg, who died in 2006, as well as his brother Maurice, who died in 2020 from Covid-19.

According to Daphné Rotcajg, her granddaughter, she left serenely, surrounded by her memories, to the Maison des Artistes des Batignolles, where she had been staying for almost a year, no longer being able to stay alone at home after health problems.

Her funeral took place on Monday 9 at the Père-Lachaise crematorium (75020) in the presence of her family, relatives and friends as well as anonymous people who came to greet her one last time.

For the occasion, the Queen of the Night did not deviate from her habits. She had planned everything from writing the fare-part to the arrival of the coffin at the crematorium.

An arrival in the image of the singer

It was not by car that the coffin of the “Grande Zoa” arrived but on board a carriage, decorated with white flowers, drawn by 2 black horses. A final masterful entry of which she alone had the secret.

To the applause of anonymous guests and guests, the coffin entered the Dome room of the crematorium, where the ceremony began around 11 a.m. A photo of the singer dressed in a green dress, her feet in champagne buckets is stood in the room.

To start the ceremony, singer Catherine Ringer of Rita Mitsouko sang a capella the title “Les P’tis papiers”, written by Serge Gainsbourg, then the audience (nearly 200 people) took it up in unison.

Régine had left a last message, which could be found on the funeral booklet addressed to the guests and decorated with her photo in a green evening dress:
“Before the curtain falls on all these beautiful years shared with you, my family and friends are going to tell you a few words about me… We are going to listen to some of my songs together. My Catherine Ringer is going to perform my “Petits Papers”. Then it will be time to pick up the disco balls and remind you that I have lived 1000 lives with you”.

Many personalities had made the trip for the funeral of “The Queen of the Night”. However, we noted the notable absence of his faithful friend Pierre Palmade. This one, devastated by the news, had spoken as soon as the announcement of the death of the singer:
“My Régine! My friend, my confidante, as you were the confidante of so many artists and anonymous people who came to tell or forget their life in all your nightclubs ….. I was in your little papers and I’m proud of it, you took me as I was without judging me. And I’m going to miss that, someone who loves me without judging me”.

The other celebrity absent, but this following the prohibition of relatives, was Pierre-Jean Chalençon. Very angry with the latter, Régine had asked that he be forbidden to approach Père-Lachaise on the day of his funeral. “Shame on anyone who surfs on the death of famous people to exist,” she said.

Politicians and show biz were present at Père Lachaise for this last tribute. Among them were the Minister of Culture Roselyne Bachelot, the Mayor of Paris Anne Hidalgo, the Mayor of the VIIth arrondissement Rachida Dati. Around them, we recognized Carole Bouquet, Jane Birkin, her friends Caroline Margeridon and Countess Vivianne from Wii, Carla Bruni, Marc Lavoine and his ex-wife Sarah Poniatowski, Anthony Delon, Didier Varrod-music director of Radio France, Yamina Benguigui and Bernard Montiel, Yvan Zaplatilek, Cyril Hanouna or even Caroline Barclays, Alexandra Cardinale. Marcel Campion and Gilles Lhote.