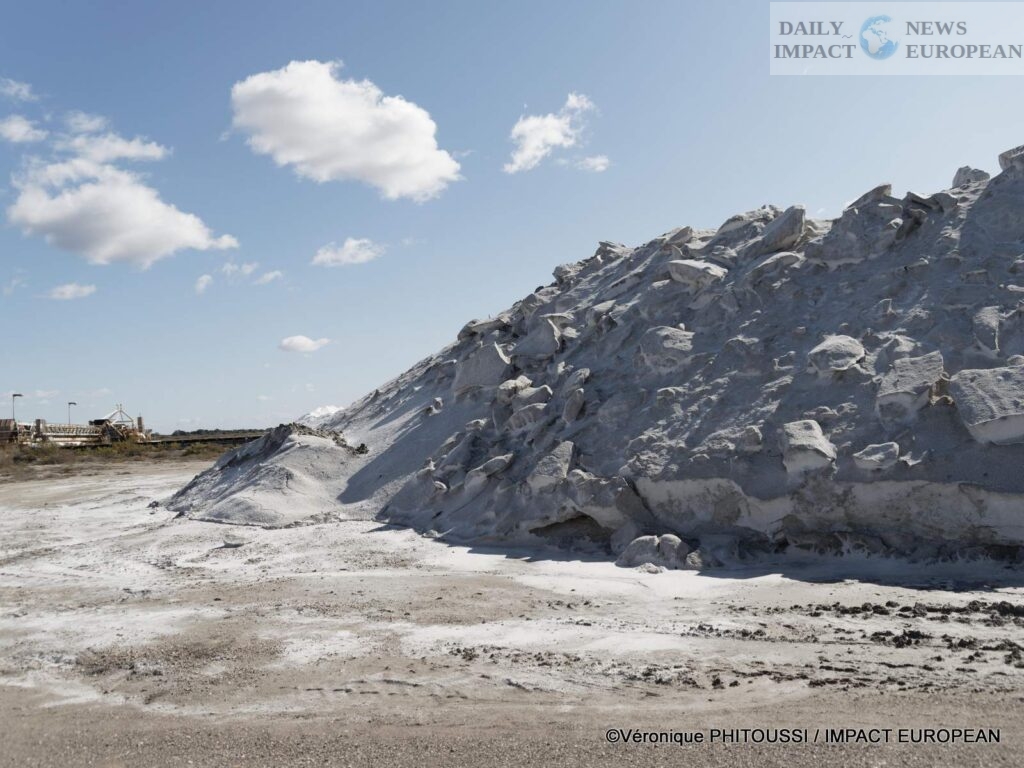 Salt mining is an economic activity that dates back to antiquity.

Salt mining is an economic activity that dates back to antiquity.

For a very long time, the saltworks were one of the city’s main resources. To harvest the salt, it is necessary to pump the water from the sea and this must travel more than 70 km in the roubines to arrive at the “salting tables”.

The mechanically harvested salt is piled up in glistening heaps called “Camelles” before being packaged for food use.

The Salin d’Aigues-Mortes in the Camargue is the largest salt production site in the Mediterranean. The saline represents approximately 10,000 hectares. It stretches 18 km from north to south and 13.5 km from east to west. 7,000 hectares are devoted to the cultivation of salt, including 420 to salt tables. The salt marshes cover a large part of the Peccais Marshes, to the south-east of the fortified village. Flamingos and swans live by the lake.

The saltworks have been listed in the general inventory of cultural heritage since December 22, 1995, both for the production site and for the administrative and housing buildings.

Production took place during the summer period in order to take advantage of maximum sunshine to optimize the evaporation of water and the crystallization of salt under the action of the wind and the sun.

The operation of the saline is done in stages, in five basins interconnected by a water circulation. The parts (first basins) will collect the pumped seawater since the basins are located a few meters above sea level. Their salinity is 38 g per litre. The water moves from basin to basin and its salt content increases as it goes.

This action will be done over several tens of kilometers. The brine water will reach the reserve basins in this way. The last basins called “salt tables” or crystallizers allow the harvesting of salt and the salt level reached is 260 g per liter of water.

What is most striking is the pink color of the pools, it is the presence of microscopic algae “la Dunaliella Salina” and the water draining carried out which allows a layer of 8 to 15 centimeters of salt to be released covering the pools ; The so-called “salt cake”.

In the past, the harvest was done manually by salt workers or sauniers, today the salt is collected using caterpillar tractors equipped with shovels at the front. The salt is stored in the form of mounds of 10 to 15 meters “Les Camelles”.

The products of the Aigues Mortes saltworks are fine salt, coarse salt and fleur de sel under the names of “La Baleine” and “Le Saunier de Camargue”.

The Salin d’Aigues-Mortes has known dark moments in history.

In the midst of the economic crisis in Europe, the Compagnie “Les Salins du Midi” had launched the recruitment of workers for the threshing and lifting of salt in the summer of 1893. Many workers were therefore attracted by the fact of finding employment.

Among the workers who came to work, we find “Les Ardéchois” peasants who were not always Ardéchois; These left their lands during the harvest season, the “Piedmontese”, Italians from northern Italy recruited by team leaders, glue leaders and “Trimards” made up of vagabonds.

Of course, the heads of the glue were obliged to make teams of French and Italian workers; A brawl broke out between the two groups and turned into a struggle for honor. This brawl was considered the trigger of the biggest pogrom in the history of France. Although the gendarmes and the justice of the peace had intervened, the situation worsened and certain vagabonds (riders) came to swell the ranks as well as those who had not been able to have a job. They all affirmed that the Italians had killed Acute Mortais. A group of Italians was attacked and took refuge in a bakery where the rioters set fire. The troop coming to rescue them arrived at 6 p.m. after the tragedy.

The rioters continued to pursue the Italians as far as the Peccais salt marshes where the greatest number of Italians were found. The captain of the gendarmes Cabley could not protect them and they were attacked on the way to Aigues-Mortes station. There were seven dead and fifty injured with lifelong sequelae for some.

It was the biggest massacre of immigrants in France and one of the biggest scandals since no condemnation or sanction was taken on the judicial level.

A visit to Aigues-Mortes is a must, a small train takes you through the Salins du Midi site and the Salins Museum.