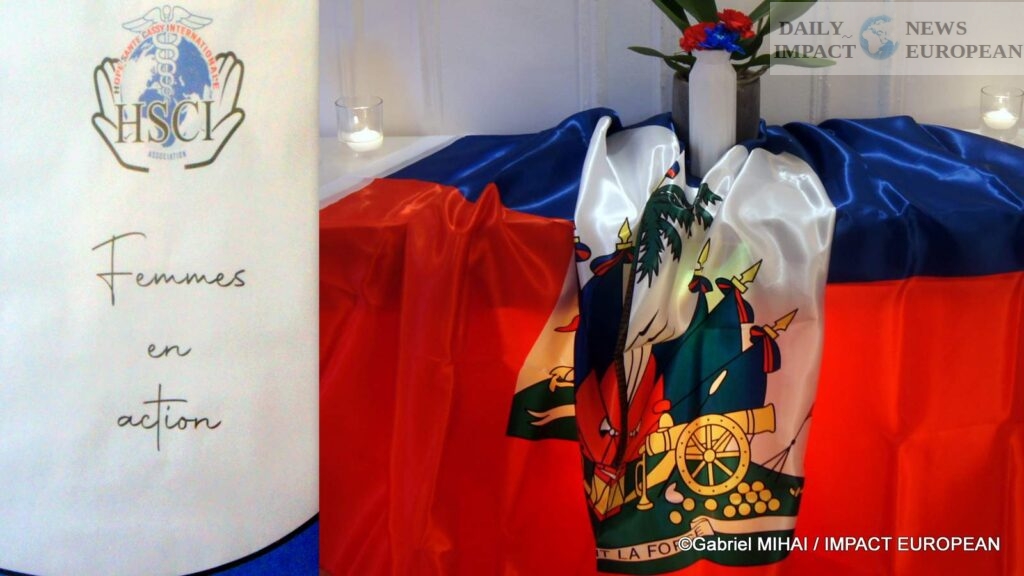 HSCI is an association that highlights women who impose themselves in the workplace in a position of responsibility. One of the goals of the association is to help the development of health in Haiti.

HSCI is an association that highlights women who impose themselves in the workplace in a position of responsibility. One of the goals of the association is to help the development of health in Haiti.

On May 18, the HSCI association, Hope Santé Cassy Internationale organized a reception at the Salon Montaigne des Salons Hoche (75008) for its launch in the presence of its president Cassandra Barthélémy and many guests, mostly women.

The date chosen corresponds to that of the 219th anniversary of the creation of the Haitian flag, May 18, 1803, at the Palais des Congrès in Arcahaie, not far from Port-au-Prince.

For this event entitled “Women in Action”, several women in positions of responsibility took the floor to explain their background, their objectives and the purpose of their actions. The theme of the evening was “Jealousy and rivalry at work when you are a woman in a position of responsibility”

Mistress of ceremonies, Julienne Morisseau, Guyanese of Haitian origin is President of Club Zonta Paris. She arrived in Paris at the age of 18, with an ES baccalaureate in her pocket, and obtained a master’s degree in work, administration and employment management at the Sorbonne. She then studied business engineering at a business school. In 2017, she obtained her diploma in administration.
A former victim of domestic violence, she works to raise public awareness, especially among high school students. Having become a senior IT executive, she devotes her free time to assisting homeless women, often victims of violence and precariousness. With the help of volunteers, she distributes hygiene kits during marauding..
Thanks to the testimonies collected, she alerts the public authorities and obtains a response. In May 2020, an investigation is carried out on behalf of the UN on violence against women during confinement.

Cassandra Barthélémy, President of the HSCI association which she revealed to the public present in the room. is of Haitian origin,
After 1 year of medical studies in Lille, she changed course and entered the Sorbonne in Paris where she obtained a law degree and joined a law firm., Married and mother of 2 children, she resumed nursing studies . Once graduated, she worked as a private nurse in Paris to be closer to the sick.
At the age of 40, she decided to expand, her new office became a place of exchange for her patients, thanks to specialists (nurses, sophrologists, psychologists, dieticians). It also organizes silk painting, sewing and cooking workshops with the help of volunteers.
Today, Cassandra has joined the CNCM of St Joseph’s Hospital and has become president of the HSCI association (Hope Santé Cassy Internationale). It is by fighting against prejudices (racism, skin color, being a woman and coming from a poor country) that she reached her goal:. Her next challenge is to write a book in which she will relate her atypical journey.

Jeanne Erantus, founder of “Saveurs créoles 509” but also partner of the event. Haitian caterer n°1 in Paris, it presents the Haitian culinary art thanks to Carline Irantus who began her career in Haiti as a chef. Passionate about cooking from an early age, she is also a mother. On her site, you can find recipes, spices, creams (creamy alcoholic rum-based drinks), Thanks to tenacity and know-how, she has become one of the renowned entrepreneurs in the field of gastronomy.

Hervé Essa is a certified executive coach. in France and abroad. Holder of an MBA at HEC, he is co-author of the book “Spiritual Leadership in Practice” released in June 2021. He also closed the meeting by proposing his vision.

Séverine Altran, surgeon-gynecologist specializing in breast cancer, began her career as an extern in Toulouse then an intern in Paris. After presenting her thesis on the differences in medical practice around childbirth in 9 European countries, she was appointed assistant clinical director at the Robert Debré hospital in Paris. She joined the Institut Curie 2 years later and became a practitioner specializing in the fight against cancer. specialized in senological and gynecological cancer surgery. Head of the senology department at the Institut Curie, she was responsible for the outpatient unit from 2013 to 2016.

In 2017, she joined the St Joseph group in Paris and participated in the creation of information booklets in collaboration with nurses, scientific illustrators and patient networks. Since 2020, she has been head of the gynecology and senology department at St Joseph, a service divided into 6 axes with referring doctors (Endometriosis, Breast cancer and gynecological cancer, Benign Pathology, HPV-related pathology, Pelvic statics and the creation of a Gynecology Endocrinology Unit). Minimally invasive surgical techniques are promoted there.

Mounia Hammoud, Director of Human Resources, Expert in administrative management, she develops the optimization of financial and administrative services of companies.

Prophetess and founder of the Evangelical Mission of the Grace of Salvation, Romualde Domoraud lives in Côte d’Ivoire. Mother of 4 children, she counts today, since the death of her mother, 17 years in the service of God in her country and internationally. She has several strings to her bow including that of advising women in all areas. For her, the woman must be present everywhere and show that she is strong in a world of men.

Director of a beauty institute in Paris, Aurélie built herself alone. After having been responsible in different circles, as manager at Sushis Shop. or a VTC training center, she chose a completely different direction by buying the hair salon she frequented. Becoming a business manager was her goal: on January 1, 2021, she opened her establishment. It took her 2 months to open her salon after the purchase but also to train. “When you want something, you have to go for it!” she says.

Séverine Massol is the founder of Sév”s Surprise Box. Deputy director of the Maison de l’Outre-Mer in Sarcelle, this mother of 4 children does not forget her Martinican origins. A former battered woman, she decided to help women victims of violence by setting up an event company: “La Boîte à Sév'”. For Valentine’s Day, she distributed boxes of chocolates to these women thanks to the help from great chocolatiers. In addition, to share the experience of what she has suffered, she co-founded with Lydia Ponchateau, the “Horizons” association, to serve as a relay between these women and their lawyers. .

Nahomie Jean-Baptiste is a dancer, choreographer and announcer in Haiti’s group darling Rasin Ginen. She showcases Haitian culture and explains the history of the flag she draped herself in for the occasion.
To close his intervention, the traditional Haitian ballet PECH performed a folk dance while asking the audience to accompany him by singing the national anthem and celebrating the Haitian flag day.

A buffet dinatore, made by “Saveurs créoles 509” was then served in order to discover the Haitian gastronomic flavors.

The History of the Haitian Flag

Composed of red and blue, organized in 2 horizontal bands. the Haitian flag was created on May 18, 1803, the last day of the Congress of Arcahaie, 80 km from Port-au-Prince, it was adopted in 1820 and made official in 1843.
The blue represents France and the red the black and mulatto populations. In a white rectangle located in the center, we find the coat of arms of the country, a palmste crowned with a Phrygian cap, rifles and cannons, copying the letterhead of the stationery of the French generals of the Santo Domingo expedition.
Previously, there was a white band which represented the white population but it was torn. May 18, 1803 during the congress which brought together leaders of the Haitian revolution. Jean-Jacques Dessalines tore off the white part of the French tricolor Catherine Flon sewed the 2 remaining parts together to symbolize the union of blacks and mulattoes, thus creating the flag of the Republic of Haiti. Under the Duvalier dictatorship (1964-1986), it was red and black.
The national flag represents the history of the Haitian people who fought for their independence, it is the symbol of their pride and their belonging to the nation, it represents national unity.