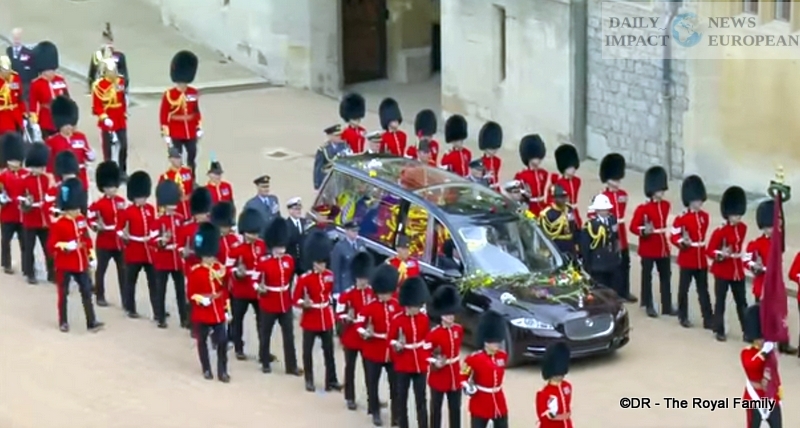 From England to Scotland, from Northern Ireland to Wales, the four nations of the United Kingdom said goodbye on Monday to Elizabeth II, whose reign of more than 70 years was the longest in history. British history.

From England to Scotland, from Northern Ireland to Wales, the four nations of the United Kingdom said goodbye on Monday to Elizabeth II, whose reign of more than 70 years was the longest in history. British history.

For the British, the period of national mourning is coming to an end. Eleven days after the death of Elizabeth II, they paid their last respects to the queen on Monday. The British pressed in an endless queue of more than sixteen kilometers, sometimes for more than twenty hours, to be able to pay homage to their queen.

The sovereign’s state funeral, which took place at Westminster Abbey, London, attended by an audience of world leaders, was shown in 125 cinemas across the country, seven cathedrals and other public venues , and in millions of homes. They were projected on a giant screen in front of public buildings, such as Belfast City Hall in Northern Ireland, or in parks such as Holyrood in Edinburgh, Scotland, or Hyde Park in London.

The funeral of Queen Elizabeth II was held in the British capital in the presence of 500 heads of state and high foreign dignitaries before ending at Windsor Castle. It is also the largest police operation in Britain since the Second World War.

Tears and silence in the streets of London

This is the big moment for the thousands of people who have crowded for several hours along the route of the coffin. The images show closed faces, lots of tears and people hugging.

The coffin pulled by the sailors will pass in front of Buckingham Palace, the official residence of the British sovereign. Big Ben rang during this procession.

The RATP pays tribute to the Queen of England. Surprise metro George V, in the 8th arrondissement of Paris. On the walls of the station, the usual sign has been replaced. White letters on a navy blue background, the words “Elizabeth II 1926 – 2022” can be read. A tribute from the public transport company in Paris and Ile-de-France which will be visible for 24 hours. Only one out of two plates has been changed, so as “not to create trouble for travelers”.

The ceremony takes place at Westminster Abbey, not far from Parliament. It is the first time that a royal funeral has been held here since that of King George II in 1760. The place where the kings and queens of England have been crowned since 1066, this building is one of London’s best-known religious establishments. Elizabeth II chose to marry there with Prince Philip and two of her children, Princess Anne and Prince Andrew.

The coffin of Queen Elizabeth II finally leaves Westminster Hall, where it had rested since last Wednesday, to join Westminster Abbey for the religious ceremony. Pulled by 142 sailors, the Queen’s remains are followed on foot by several family members including her son, King Charles III.

Until the end, the queen wanted to add her personal touch. She herself wished that the religious ceremony would not last very long. The Queen also chose a very familiar song since it was played at her wedding. Along the way, the British continue to throw flowers at the hearse carrying the coffin of Elizabeth II. A last farewell for this people who for the most part have only known this sovereign.

Sailors rather than horses it becomes a tradition

Well, the tradition dates back to Queen Victoria’s funeral in 1901. At the time, horses pulled the coffin, except that at the start of the procession, a horse had panicked and started kicking in the stretchers, threatening to overturn the coffin. In the panic, improvisation played and it was decided to unhook the horses and ask the sailors present to take over. Since then, tradition has taken over and it is now part of the royal funeral ceremony.

Sandy and Mick, two of the Queen’s last corgis, are there too, as the procession enters the courtyard of Windsor Castle. The royal family, King Charles III, his brothers Andrew and Edward and his sister Anne, as well as his sons Princes William and Harry, are preparing to follow the coffin on foot again.

The coffin is about to enter the Saint-George Chapel. This is the last time the coffin will be seen in public and outdoors before its burial. It is in the same chapel that Harry and Meghan were married on May 19, 2018, and that King Charles and Camilla received a blessing for their wedding in 2005. It is also the chapel where the Queen attended the funeral of her husband Prince Philip on April 17, 2021. The country was then in the midst of a pandemic and she had been photographed alone, masked and surrounded by empty benches. The silence is now total, while the coffin is about to be mounted on the steps. The bells are ringing.

The scepter, globe and crown are removed from the top of Queen Elizabeth II’s coffin. They will be transmitted to Charles III at his coronation, in a few months. In the meantime, they will be kept at the Tower of London. This moment officially marks the end of the reign of Elizabeth II.

A priori, the queen is only buried with her wedding ring and that of her husband, Prince Philip, which she had kept. There is a blur regarding her favorite necklace, with three rows of pearls.

The members of the royal family will meet this evening, in private, to accompany the coffin in the chapel where Elizabeth II will rest, with her husband and her sister in particular.

The anthem “God save the King” finally sounds. King Charles III has moist eyes, his reign really begins at this minute.

At the end of the ceremony, the Lord Chamberlain broke the cane over Queen Elizabeth II’s coffin. And this gesture had enormous symbolism since it marked the end of the reign of the queen.

The Queen’s private funeral has begun

The Queen is buried with her late husband Philip, the Duke of Edinburgh, alongside her father, King George VI, her mother, Queen Elizabeth, the Queen Mother and her sister, Princess Margaret.