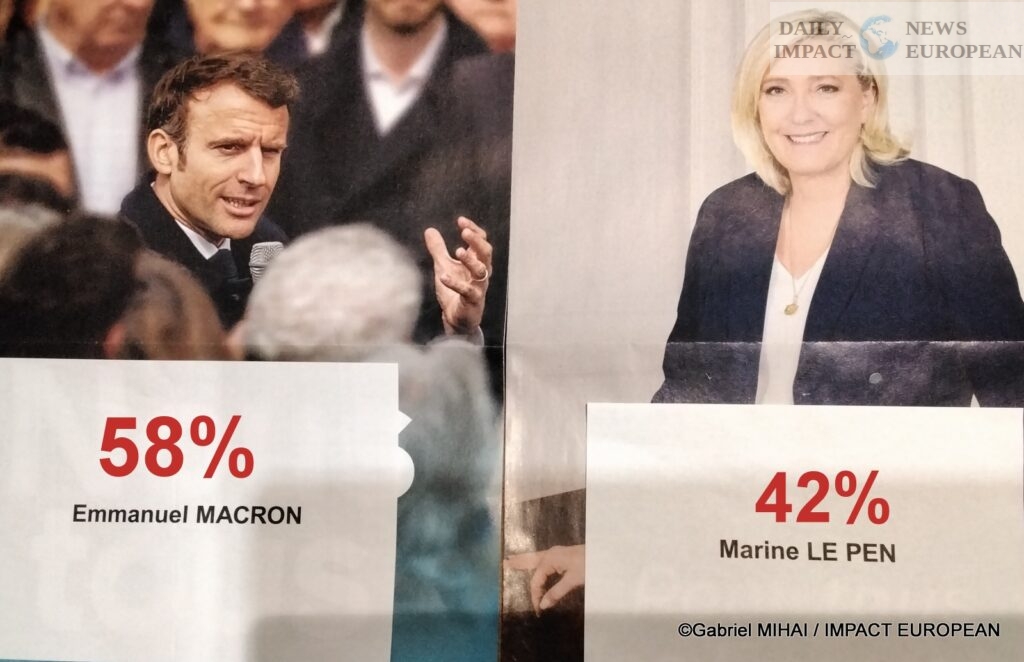 According to the first estimates unveiled at 8 p.m., Emmanuel Macron is re-elected for five years. He won 58% of the vote, against 42% for Marine Le Pen. Abstention is around 28%.

According to the first estimates unveiled at 8 p.m., Emmanuel Macron is re-elected for five years. He won 58% of the vote, against 42% for Marine Le Pen. Abstention is around 28%.

He is the ninth president of the Fifth Republic, the third to serve a second term, but the first president to be re-elected without cohabitation. This is an unprecedented first victory under the Ve, a “historic feat”.

The candidate of the Republic in March will therefore again be the French head of state for the next five years. This will be his last presidential term, the number being limited to a maximum of two.

Laurent Fabius will announce the official results on April 27th. Emmanuel Macron will then have to elect a new Prime Minister and form his next government. He will be able to choose the exact date of his investiture ceremony which must take place no later than next May 13. His entourage told AFP that the re-elected president might prefer to be re-invested before May 9 in view of the international context.

Marine Le Pen describes her score as a “brilliant victory”, despite her defeat. “Determined, we are more than ever (…) today I have no resentment or resentment,” said the losing candidate of the National Rally (RN). “In this defeat I can’t help but feel a form of hope,” she says.

The RN candidate wins 69.60% in Guadeloupe, 60.87% in Martinique, 60.70% in Guyana, as well as Saint-Pierre-et-Miquelon (50.69%), according to the prefectures of these territories, where Jean-Luc Mélenchon had made significant scores in the first round.

In her speech, Marine Le Pen, invites her supporters and “all those who had the courage to oppose Emmanuel Macron during this second round” to continue the fight for “the great electoral battle of the legislative elections”, campaign during which she indicates that she is accompanied by Jordan Bardella, acting president of the National Rally.

The presidential candidate, who came third in the first round, announced that he would speak after the second round. “Emmanuel Macron is the most poorly elected president of the Fifth Republic,” he said.

“Do not resign yourself, implores Jean-Luc Mélenchon. Take action frankly, massively. Democracy can once again give us the means to change course. The third round begins tonight!”

The candidate of rebellious France, had called in the in-between round to elect him Prime Minister by voting to give him a majority in the next legislative elections which will be held on June 12 and 19.

Government spokesman Gabriel Attal welcomed Sunday the re-election of Emmanuel Macron (around 58%) against Marine Le Pen, “a historic result in the history of the Fifth Republic”, while saying “lucid about the political context”.

A form of feat after a first five-year term yet punctuated by crises, from “yellow vests” to Covid, which inscribes the country in continuity on its main economic orientations, on its role in the European Union and in international relations. His score on Sunday evening, which he must celebrate on the Champ-de-Mars, facing the Eiffel Tower, does not, however, offer him a blank check for the next five years, when colossal challenges await him, against a backdrop of war in Ukraine and galloping inflation.

A necessity at the head of a France cut in half, even in three, given the number of voters among the 48.7 million called to the polls who chose to shun the voting booths on Sunday, in this remake of 2017 organized while the three school zones are on vacation.

Coming to power 5 years ago “by breaking and entering”, in his own words, Emmanuel Macron continues his meteoric personal trajectory, both classic (ENA, finance inspection, Minister of the Economy…) and unclassifiable in a political landscape that he dynamited. But he who had promised on the evening of his victory in May 2017 to “do everything” so that voters “no longer have any reason to vote for the extremes” did not succeed in curbing the rise of Marine Le Pen. .

Abstention should reach 28% in the second round of the presidential election on Sunday, 2.5 points more than in 2017 (25.44%), according to convergent estimates from four polling institutes, but without reaching the record of 1969 (31.3%). According to Ipsos Sopra-Steria, Ifop, Harris interactive and Elabe, the level of abstention would thus be 28%, up 1.7 points compared to the first round (26.31%), which had already been marked by a weak participation, while Opinionway anticipates for its part 27.8%.

“Never has there been such a vote of despair in France,” said the president of the Republicans, Christian Jacob. The party candidate, Valérie Pécresse had collected just under 5% of the votes in the first round.

“This is the eighth time that defeat has struck Le Pen’s name,” said the candidate Reconquête!, who came fourth in the first round of the presidential election. He had called to vote Marine Le Pen in the second round. “Are we doomed to lose? No, there is no fatality.”

According to the candidate Reconquête!, loser of the first round “two blocks” will face each other in the legislative elections: “one macronist and the second Islamo-leftist”. “The national bloc must also unite and come together, our responsibility is immense,” he insists.