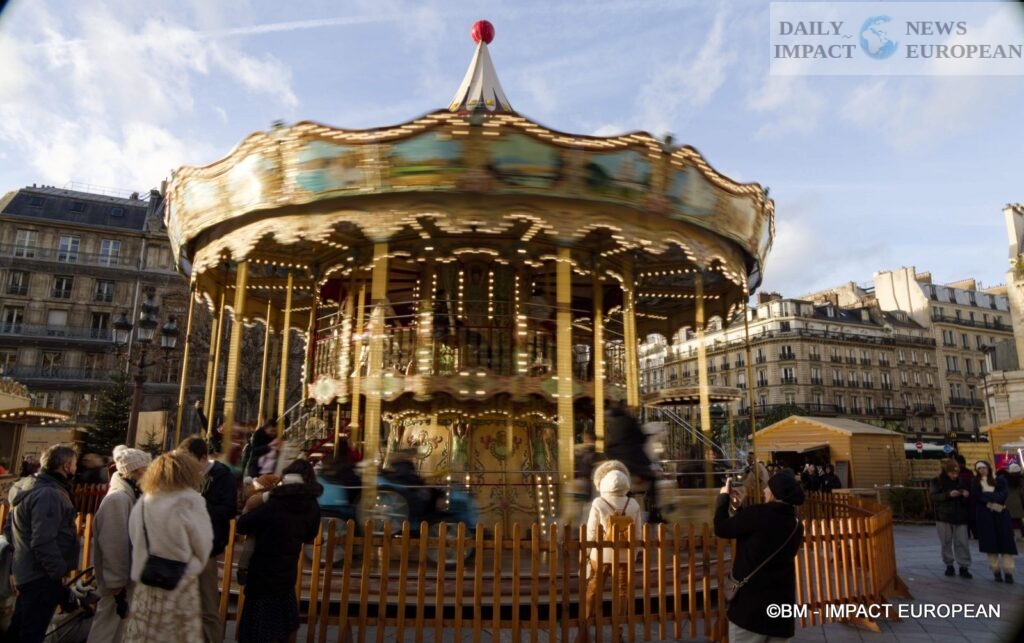 It's a good time to go back to childhood and rediscover traditions.

So many places to discover during the Christmas period! Squares, monuments and department stores are the great builders of these illuminations. It’s a good time to go back to childhood and rediscover traditions.

For the occasion, the forecourt was adorned with illuminations in the middle of fir trees, white birches under a shower of stars and snowflakes. For “Enchanted Paris”, the forecourt of the Hôtel de Ville has donned its festive colors. The attraction ends on January 1 and had started on December 2, 2022.

The decorations were made of wood by lumberjacks and the fir trees from sustainably managed French nurseries. They presented themselves at the horticultural production center of the City of Paris, in Achères (78) or the Morvan forests. At the end of the event, they will be transformed into mulch in planted beds, those in pots will be reused in other years.

There were 3 small catering chalets on the theme of the end-of-year celebrations, and 6 offering products from craftsmen with the Made in Paris label, specially designed to enhance their work.
Some chalets offered windows, one with a nativity scene or others animated and illuminated.

As for the attractions, there was something for everyone:
– Carousel for children
– Toboggan run (minimum age 6 years for a child alone and 3 years for an accompanied child)
– Climbing wall (from 6 years old)
– Meeting with Father Christmas on Wednesday, Saturday and Sunday, every day during school holidays)

The “Christmas Village” in front of the Hôtel de Ville is part of the “Paris scintille” operation which takes place throughout Paris. A total of 4,300 trees were spread throughout the capital.

In a completely different style, the monuments and squares offered a spectacle of illuminations. Avenue des Champs Elysées (75008), rue St Honoré (75001) and place Vendôme (75002) are among them.

To celebrate the end-of-year celebrations, Place Vendôme offered the public a pretty postcard from November 22, 2022 to January 2, 2023. It brought together around ten sparkling fir trees, including 4 nearly 10 meters high, in the frame of the luxurious square that houses the Chaumet private mansion, decorated for the occasion with graphic shooting stars.

This year, after the Ritz, the famous high jewelry house Chaumet has teamed up with Noir Coffee Shop to open “L’Ecrin du 12 Vendôme”, an ephemeral gourmet spot that offers a selection of coffees and pastries. Among them is a drink exclusively made for Chaumet, based on honey and inspired by the “Bee my love” collection.

Moreover, by buying a pastry, you are doing a good deed. The coffee shop donated 10% of the proceeds from this operation to Women in Coffee, an association that promotes the work of women in the heart of coffee plantations. The Chaumet house has undertaken to reverse twice the amount sent to the managers of this same cause.

The department stores were not left out for the end-of-year decorations. Each of them chose a different theme. Thus the Bon Marché opened the ball with “The Christmas ball factory”, the BHV with “La Provence”, the Printemps Haussmann with “The circus”, the Galeries Lafayette a theme around the Christmas tree and the Samaritaine, “The dance “.

From December 8, 2022 to January 10, 2023, La Samaritaine offered her dance show to celebrate the end of the year. Between the rue de Rivoli and the Pont Neuf, the public could stroll under a floor of luminous stars to discover windows in reference to dance. We go from rock to hip-hop via disco. On the rue de la Monnaie side, you could see archival videos offered by the National Dance Center which for the occasion had joined forces with the department store to animate 4 shop windows. There are images retracing the evolution of classical and contemporary dances from the 1930s to the present day.

Inside, the stars twinkle around the staircase and its balconies transformed into a giant front calendar. Young and old alike could marvel at the costumes signed by great designers, which the Paris Opera exhibited. During the weekends, the contemporary dancers of the Théâtre du Châtelet gave a preview of excerpts from 42nd Street, a cult Broadway musical. A dance studio transformed into a space dedicated to the video game Just Dance, a dance class led by teachers from Studio Dancefloor Paris.

Well, for our darlings, the inevitable meeting with the hero of the season, Santa Claus who walked the aisles of the store while dancing.