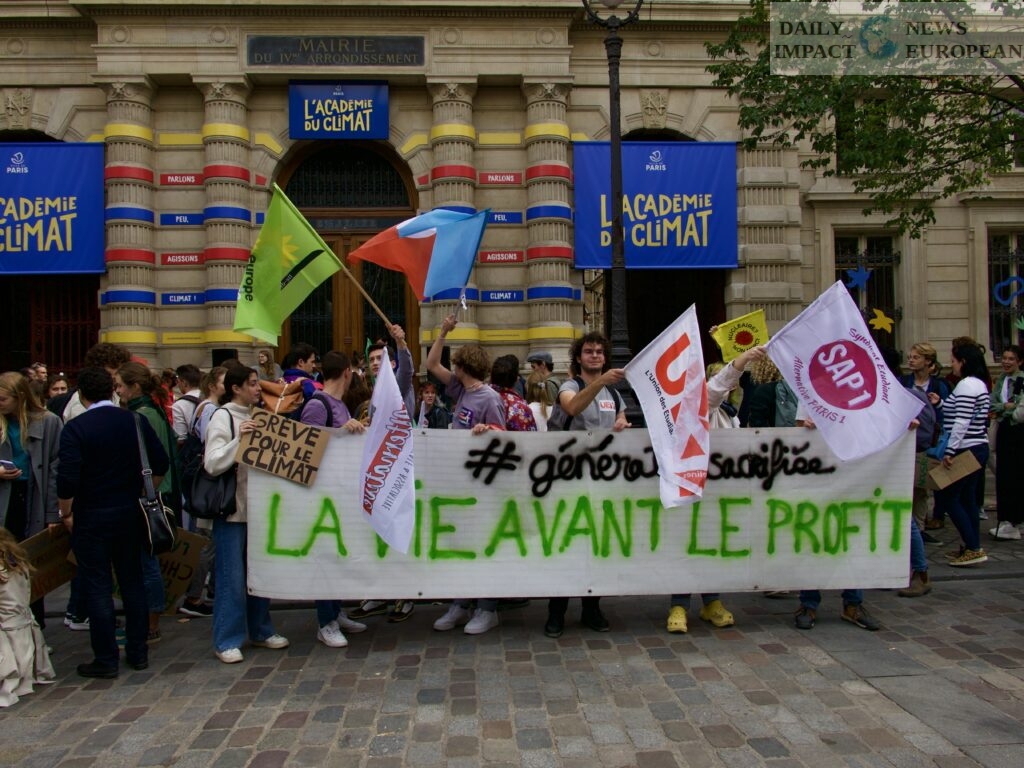 Demonstrators in front of the Climate Academy, in Paris, as part of the global climate strike / ©Cerdic CHOTEL - IMPACT EUROPEAN

Marches, rallies, blockades: multiple mobilizations of young people are planned from Friday, September 23 across France on the occasion of a new world day of school strike for climate justice, is throughout the weekend, the movement launched by the Swedish Greta Thunberg in 2018.

Marches, rallies, blockades: multiple mobilizations of young people are planned from Friday, September 23 across France on the occasion of a new world day of school strike for climate justice, is throughout the weekend, the movement launched by the Swedish Greta Thunberg in 2018.

In Lyon, activists from Youth for Climate France marked this new international meeting by blocking the entrance to a TotalEnergies site for an hour, denouncing a mega-oil project in Uganda recently pinned down by the European Parliament. The activists “no longer hold their signs sitting in front of the places of political power, as Greta Thunberg did, but by blocking the places of power of capitalism: the multinationals specializing in fossil fuels”, justified in a press release the organization, one of the two to present itself as the French branch of the movement initiated by the Swedish environmental activist.

“Youth for Climate” organized rallies this Sunday in around twenty cities, including a parade in Paris, to “demand the banning of advertisements in the Ile-de-France public space”.

“We have 800 people who have reported striking on our site”, in “500 schools” said one of the national spokespersons, Pablo Flye, during a press briefing in Paris.

“The data presented in this report is clear: we continue to see growing scientific evidence of the global impacts of warming that shows no signs of abating,” commented oceanographer Rick Spinrad, one of the scientists who led the investigation.

For the tenth consecutive year, the mean sea level is also at a record level, 0.97 cm above the level of 1993, the year in which satellite measurements began.

While greenhouse gas emissions have started to rise again after the Covid-19 crisis, the concentration of CO2 in the atmosphere has reached an average of 441.7 parts per million (ppm), according to the annual report. American on the climate. That is 2.3 ppm more than in 2020. And a record since the start of measurements and for at least a million years.

And that’s just the beginning. While every tenth of a degree counts, the world is indeed heading towards a warming of +2.8°C by 2100 even if the commitments made by States under the Paris agreement are respected, according to the UN climate experts (IPCC).

The year 2021 resulted in a rebound in gross emissions (without taking into account absorption) of greenhouse gases, with the partial resumption of economic activity. But France nevertheless respects the trajectory it has set for this raw indicator, notes the observatory.

On the other hand, for net emissions (including absorption by forests and soils), “the indicative annual share of the carbon budget is exceeded by 20.4 million tonnes of CO2 equivalent, taking into account the degradation for several years of the forest well”, notes the observatory.

“With many communities hit by millennial floods, exceptional droughts and historic heat this year, it shows that the climate crisis is not a threat to come but something we must face today. »