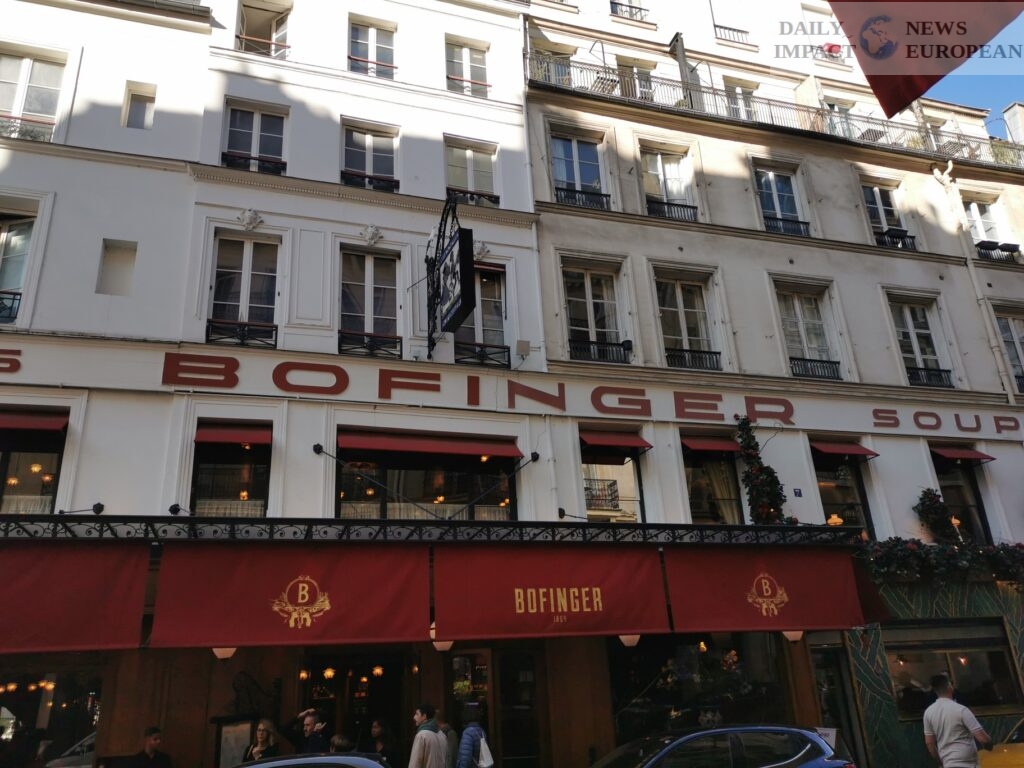 The Brasserie Bofinger, rue de la Bastille in Paris (75004) is a place to discover during Heritage Days 2022. It has a wide spiral staircase, a flowered dome...

The Brasserie Bofinger, rue de la Bastille in Paris (75004) is a place to discover during Heritage Days 2022. It has a wide spiral staircase, a flowered dome…

Located near Place de la Bastille, Bofinger is one of the most famous brasseries in Paris. It owes its fame to its sauerkraut, “the best in Paris”, home cooking according to tradition, but also to its seafood benches.

Become an institution thanks to its historical decor, the brasserie offers a whole range of classic dishes apart from Alsatian specialties among which there are desserts such as Kougloff French toast or Grand Marnier soufflé.

History of the Bofinger brewery

In 1864, the Alsatian innkeeper Frédéric Bofinger, originally from Colmar, moved to Paris and created the Bofinger brasserie not far from the Place de la Bastille. It will become 6 years later in 1870, the first Parisian brasserie to serve draft beer. The brasserie has become the meeting place for Alsatians, many of whom work as carpenters and cabinetmakers in the Faubourg St Antoine district.

After the annexation of Alsace and Lorraine by Prussia, many refugees approached the capital. Aristide Bruant even brought his own eggs there to make an omelette. In the 1920s, Frédéric Bofinger handed over his business to his genres and the establishment became the most beautiful brasserie in Paris. In 1924, the formation of the “Cartel des Gauches” was decided by Edouard Herriot, president of the radical party.

The decor dates from 1880 but we are witnessing a transformation after the expansion of the brewery following the purchase of adjacent shops. and the intervention of the architect Legay and the decorator Mitgen between 1919 and 1921. The dome room was defined in 1919, it houses an “Art Deco” style dome. In the center of the room, a sideboard surmounted by a a wisteria separates the tables.

Behind an oak facade, identically redone in 1982, we discover a wide spiral staircase, the large oval dome with floral motifs, ceramic statues of herons by Jérôme Massier, a stained glass window signed by master glassmakers G. Neret and E. Royer representing the King of beer Gambrinus, paintings of Alsatian landscapes and village scenes in marquetry such as the wedding of friend Fritz by Charles Spindler. On the ceiling, tulip lights illuminate the rooms. Small singularity: the uprights of the urinals are decorated with the heads of dolphins.

On the occasion of the colonial exhibition in 1931, a room was created following an expansion of the establishment in 1930. It is decorated with paintings representing the Alsatian landscapes, produced by the author of the sign, Jean- Jacques Waltz, known as Hansi, also from Colmar. In the room of the continents, we discover wooden marquetry enriched with real mother-of-pearl, made by the painter Panzani, nephew of the creator of the pasta brand.

During the Second World War, the inscription “Vive la France” on “The village wedding” was kept by “Vive le vin” so as not to offend the occupant who had his habits in the establishment. The slogan returned after the war but there are still traces of the modification on the marquetry.

On the pillars, there are representations of emblematic Alsatian dishes (kougelhof, foie gras from Strasbourg, onion soup and of course sauerkraut). Also note the presence of paintings representing storks, symbolic birds of Alsace.

An emblematic place for all of Paris

After the slowdown in activity, Eric de Rothschild and Isidore Urtizverea bought the brewery in 1968. It dressed politicians and all of Paris at the time On May 10, 1981, François Mitterrand celebrated his presidential victory there. Note also designers (Jean-Paul Gautier, Christian Lacroix or Azzedine Alaïa ..) but also show biz personalities like Johnny Hallyday or Michel Polnareff who celebrated his return to France there. In 1989, the brewery was listed in the additional inventory of historical monuments.

In 1996, Jean-Paul Bucher, founder of the Flo group, bought the establishment. The success continues thanks to the authentic charm of the place with its revolving door, its bar, its staircase, its quilted black leather banquettes, its bronze sconces, the brassware and the mirrors and the modernizations, especially in the kitchen

To start a good meal, the Americano, a house blend of red Martini and Campari, served with a slice of orange and a zest of orange and lemon on a splash of soda.

Apart from sauerkraut, fish, shellfish and brasserie dishes are on the menu. Among the starters, you have the choice between a duck foie gras with fleur de sel, a house pâté, avocado-prawn or a carpaccio of scallops. As for hot starters, there is onion soup, ravioli from Dauphiné or langoustines,
In terms of fish, there is sole meunière, pike quenelle, scallops or Scottish salmon, but also the “baeckeoffe” made from sea bass, Scottish salmon and haddock. But you can You can also be tempted by a duck breast with Sichuan pepper, a Charolais beef tartare, the grilled rib steak or the shank parmentier.

Finally, a large selection of cheeses including Munster and desserts including chocolate cake cooked to order, apple and grape strudel or the huge floating island, marquetry, Panzani.