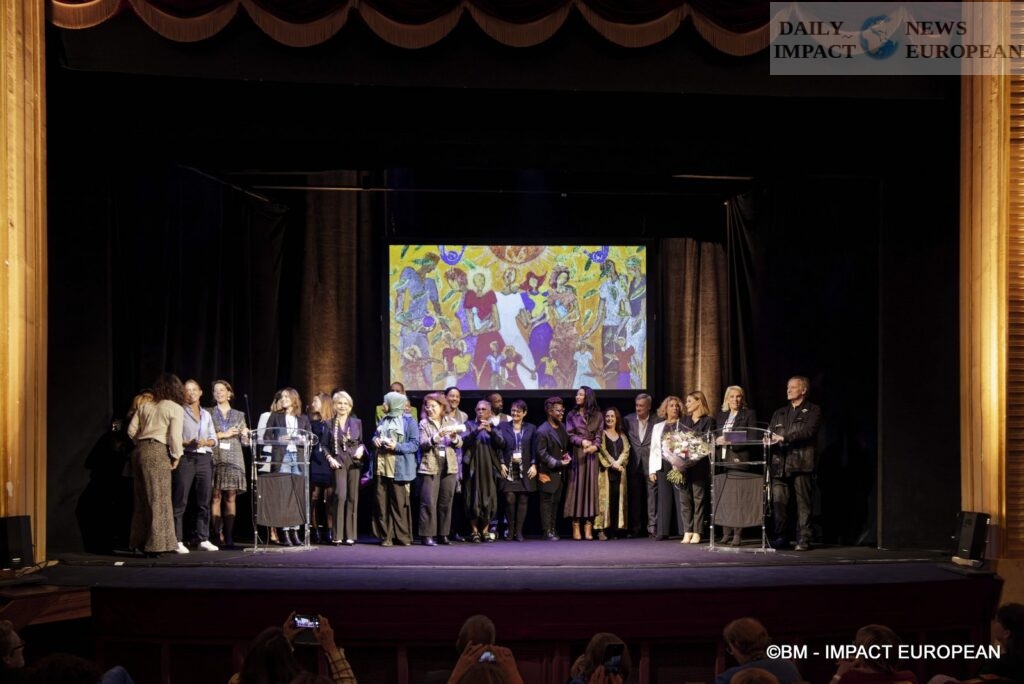 Danielle and Patrick De Giovanni, founders of the DAPAT Endowment Fund, gave an appointment to the candidate associations, Monday, October 17 at the Edouard VII Theater in Paris, to reward them.

Danielle and Patrick De Giovanni, founders of the DAPAT Endowment Fund, gave an appointment to the candidate associations, Monday, October 17 at the Edouard VII Theater in Paris, to reward them.

Fabrice DI FALCO delighted the audience with his fascinating voice and Anne ROUMANOFF’s jokes made the guests laugh. The prizes for the two categories, ESPOIRS DE DAPAT and PRIX DU JURY, were then awarded to the winning associations. The latter, of great notoriety, are aimed at women in difficulty, so that their struggle becomes visible but also to obtain support.

Monday, October 17, the 5 winning associations received their award at the Edouard VII theater during the ceremony:
1st: ARCE – FUTURE WOMEN;
2nd: PERLA;
3rd: THE FIELDS OF BOOZ;
4th: THE SORORITY FOUNDATION;
5th: A VOICE FOR THEM.

Who are these associations?

Support for the professional inclusion of women over 45 and the fight against “ageist” and sexist discrimination. Today, 1 million women over 45 are looking for a job in 2022.

While life expectancy is getting longer, the gaze cast on women over 45, both by society and the professional world, is pitiless. Added to this accumulation of sexist and ageist discrimination is an economic reality since, having become invisible on the job market, women expose themselves to a risk of precariousness in their second part of life.

Arce – Avenir Femmes denounces the systemic vulnerability of women from the age of 45 and offers appropriate support for returning to work in order to secure their second part of life.

Perla is committed to consolidating the care of women weakened by domestic violence and single mothers.

The association is based in Bordeaux, mobilizes for access to care and well-being for vulnerable women who need support to regain confidence and self-esteem; it is also addressed to single women who become and become to be mothers. It is also a collective of professional speakers within partner structures and during itinerant hotlines. It provides care for children in workshops, without having to pay a euro for women.

“A man should see a rare pearl in a woman, and in her smile a ray of sunshine, but today this support is lacking, because of sexism, which has killed women’s freedom.”

THE FIELDS OF BOOZ

The fields of Booz were created by two congregations “Notre Dame de Charité” and “Le Bon Pasteur”, to help single women, asylum seekers, in the process of regularization and integration.

It all started with a biblical story, taken from the Book of Ruth, where three characters are at the heart of this story:
– Noemi, an already old woman returns to Bethlehem, her country, after ten years of emigration to Moab;
– Ruth, her daughter-in-law who wanted to follow her, also arrives, a widow, childless and a foreigner;
– Booz, is a rich relative of Noémie, who, according to the law, has the right to marry Ruth to ensure a lineage and thus restore all their rights to these two women.

The inspiration of the Association is what happens in the field between Ruth who gleans and Booz who welcomes her, defends her from the racism and sexism of her harvesters, and integrates her into his staff.

Whether they left their country of origin for political or personal reasons (wars, revolutions, racism, religious discrimination, excision, forced marriage, sexual violence, sexual orientation, etc.), all degraded degrading and violent living conditions with physical and psychological consequences. Through the different forms of support and assistance it offers, the association wants to enable these women to regain their dignity and self-confidence and to facilitate their integration.

It fights against domestic and intra-family violence, against harassment and more generally against all forms of violence faced by women and people from gender minorities.

The association also registers its action in the fight for gender equality, for safety, for respect and for the development of all.

The community can be tapped at any time for advice, contacts, expertise and support on a multitude of topics.

Let’s fight together against domestic violence, intra-family violence and against all forms of harassment.

In the street, at home, in the office, in transport, everywhere, you see in real time the people around you who are ready to act.

A VOICE FOR THEM

It offers a totally free moving and storage service for women fleeing a violent spouse.

Women must first be registered with a social structure, CCAS, emergency centres, MSD to be able to benefit from this aid.

When a structure calls on them, the association organizes the move in complete safety, in order to recover the personal effects of the beneficiary and divert them to a free storage service while it is being reconstructed within a center of accommodation. At the end, when the woman moves into a new home, a redevelopment service is also provided by the services. There is also a partnership agreement signed with an association that offers foster families for pets.

The 5 favorite associations each received an endowment of €10,000.

Combined with theoretical (medical and psychological) and practical (in the field) research, it enables women who are victims of violence to rebuild themselves and regain their self-confidence.

She accompanies all vulnerable women with an unprecedented, interdisciplinary practice based on the values ​​of Karate in which the art of combat sport takes on another dimension.

• Self-respect is at the beginning of respect for others

• Production of the methodological guide

Together, let’s fight the silence

Fight for Dignity launches the “Together, let’s fight the silence” campaign. Supported by 18 athletes, including the former minister responsible for sports, Roxana Maracineanu, this campaign helps to raise awareness and fight against violence in sport. The “Together, let’s fight the silence” campaign includes a unique guide to help witnesses or victims of violence. They and they will find advice, numbers to call in case of emergency, associations to accompany them, guide them.

FIGHT FOR DIGINITY received an endowment of €15,000, DAPAT endowment fund dedicated to women in distress.

La Maison de Jeanne aims to create a shelter for isolated women with or without children.

The house will be located in Belfort, (90) in the center of the city and will accommodate around thirty people (including women and children).
Comprehensive care: social, educational, legal, psychological will be offered by a team of professionals and volunteers, all driven by a common goal: to restore the women received in their rights and support them in their parenthood.

The association received a donation of €10,000 as an endowment fund for its projects.

The association was created in 2013 by two professionals from the Saint Luc maternal center in Nantes: this center welcomes isolated women in great difficulty.

The association offers sponsorship between a family and a single mother. Offer single mothers a stable, trusting and long-term relationship with a godmother family. Moments of listening, exchanging and sharing allowed them to (re) gain confidence, to discover their know-how and thus allow them to live their life as mothers more serenely.

GODMADER & YOU received a donation of €10,000 to an endowment fund for its project.

Since 2013, the Rêv’Elles association has inspired, motivated and supported young women from working-class neighborhoods in their personal and professional development.

The association present in Île-de-France and in the Auvergne-Rhône-Alpes region, has raised awareness and supported nearly 4,000 young girls and also acts in the long term in favor of the economic and social emancipation of young women from working-class neighborhoods. .

RÊV’ELLES received an endowment fund of €10,000 from DAPAT for its project.

A LITTLE BAGGAGE OF LOVE

The association A small baggage of love was born from the will of Samra Seddik to help pregnant women and mothers in great precariousness. The objective is to provide all the necessary equipment to mothers, so that they can welcome their babies in good conditions and with dignity.

The association is today installed in a former library of the Saint-Sulpice church in Paris.
This place allows women and volunteers from all walks of life to meet. It is a place of storage, preparation and distribution of maternity bags.

The association also received an endowment fund of €10,000.

A beautiful and generous initiative created by Danielle and Patrick De Giovanni, dedicated founders of the DAPAT Endowment Fund for women in distress, a cause supported by the acclaimed associations, a festive evening did not fail to move the public present.

See you next year for the 3rd edition on a very sensitive theme “access to premises and the development of the associative network”.