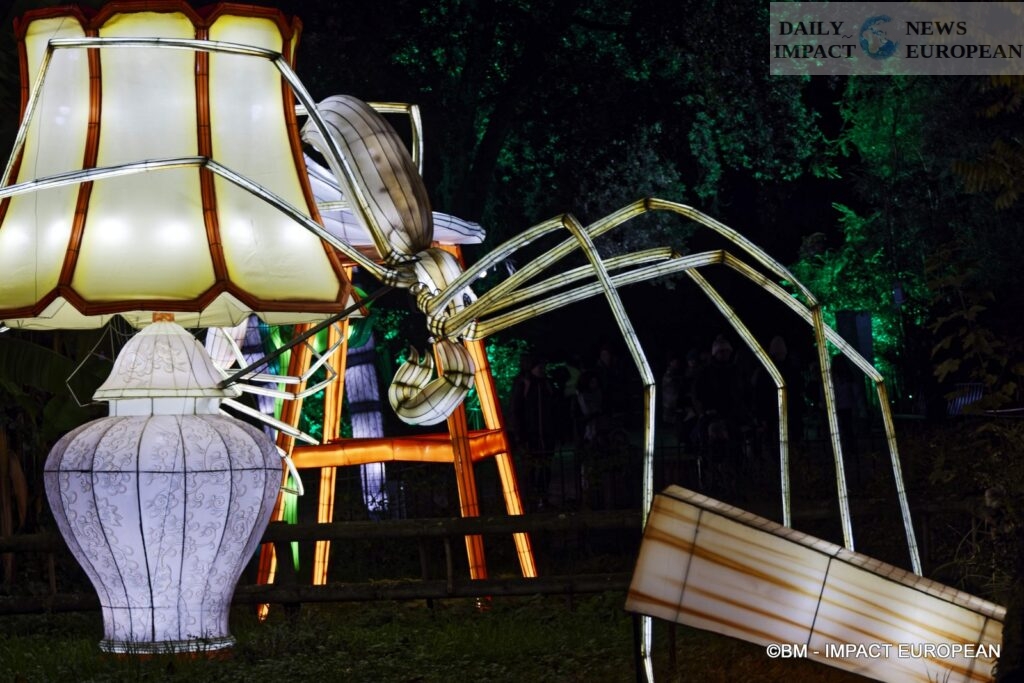 This year, the MHNH (National Museum of Natural History) offers a journey into the world of tiny fauna, respecting energy sobriety.

This year, the MHNH (National Museum of Natural History) offers a journey into the world of tiny fauna, respecting energy sobriety.

In 2018, the MNHN honored endangered species, the oceans in 2019 and prehistoric animals in 2021. This year, after “Evolution in the process of enlightenment”, the Jardin des Plantes is offering a 4th edition on “the world of tiny fauna in the process of illumination”.

This nocturne is visible from November 14, 2022 to January 15, 2023. We discover the world of the infinitely small, magnified several million times, represented by a hundred gigantic luminous sculpture paths.

During this nocturnal show co-produced by the MNHN and China Light Festival, we meet along the paths, these animals that inhabit the meadows, forests and ponds of France. This is how we can discover species, most of which are invisible to the naked eye, but which play an essential role in ecosystems. However, this mini fauna is essential because it participates in the reproduction of plants by pollination or in the regulation of populations by predation and also in the recycling of organic matter. Among the most familiar species are centipedes, woodlice, dragonflies, glowworms but also butterflies, spiders and ants and among the most mysterious.

The principle of exposure

According to Michel Saint Jalme, illuminations project manager, the principle of the exhibition is that man finds himself in the place of insects: Upon entering, one passes through a shrinking machine to find oneself in an inverted ladder:

The grass is 3 to 4 meters high and the insects are bigger than us: Snails or one of the smallest birds in France, the wren are 3 times the size of humans. The message is to say that all living beings are important in the functioning of the ecosystem, of nature. The smallest that the human does not know or see in the grass under his feet is very important.

The stroll begins in the heart of the meadow where insects, butterflies, spiders, snails and shrews evolve, before reaching the pond where we find dragonflies, mosquitoes and frogs. We then cross an XXL forest where we can come across beetles, woodlice, centipedes and glowworms before crossing a tree trunk over 25 meters to go to the menagerie where we arrive in the world of the tiny where we discover strange beasts such as silverfish, jumping spiders, spider crabs or other mussels.

The course ends with the species that we find in our homes but also those that share our life, harming the human body such as fleas, mites, lice or even bacteria and viruses but also the fertilization of the egg.

Taking into account energy sobriety, the scientists of the Museum designed the story, the scenario and all the structures. The Chinese partner (Lantern Festival) has produced, using the traditional technique, all the structures made of metal and painted fabrics to give finesse to all the insects, plants and animals represented. The set is equipped with LEDs to have a limited energy cost.

History of the insect world

The history of insects dates back more than 400 million years. Coming from a set of very ancient animals, the anthropodes were their precursors and their characteristic traits.

While the Earth was formed 4.5 billion years ago, life appeared 3.8 million years ago, extended in the form of single-celled organisms. The first multicellular animals landed 900 million years ago, probably sponges fixed to the bottom of the oceans and it was only 550 million years ago that the anthropods arrived on Earth. They were composed of a body wrapped in a shell, a more or less flexible exoskeleton, equipped with joints for the first time, these creatures have legs and eyes composed of multiple facets. A few centimeters long, trilobites lived between -550 and -250 million years ago, as fossils prove. They look like modern woodlice, of which 20,000 species are known.

After plants emerged from the water, centipedes, myriapod cousins of insects, did the same 450 million years ago and were the first animals to live permanently on the continents, feeding on plants.