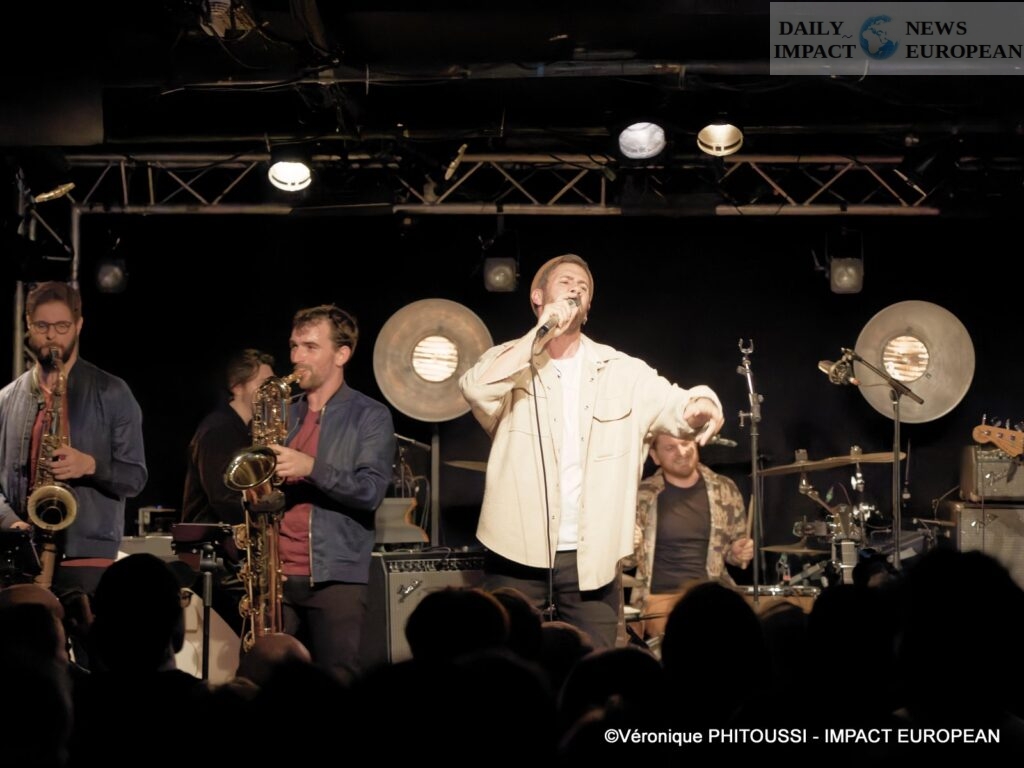 Thomas Khan performed in concert at the New Morning on October 26.

Thomas Khan performed in concert at the New Morning on October 26.

With his voice with warm accents and his very soulful intonations. Thomas Khan now belongs to the group of Soul, Funk and Jazzy singers. He has that voice that great black American singers have; In a word, captivating.

The Composed Trio performed in a more intimate version that fit well with the venue. at “We Are Paris” in complete privacy when the record was released.

With this more successful second album, Thomas Khan has surrounded himself with the best musicians. Julien Filhol plays guitar, Alexandre Lafforgue is on bass, Thomas Perier is on keyboards. All contributed to the development of this carefully thought out album. The singer incorporated a brass section in the creation of his new album “This is Real”. This brass team is made up of Sébastien Depeige on trumpet, Éric Pigeon on saxophone and Léo Moulin on saxophone.

This brass section gave him this little black American side of Motown, James Brown or Lee Fields that they inspire him so much. These two saxophonists and this trumpeter knew how to underline the music of Thomas Khan and accompanied him in the furious rhythm.

“This is Real” was recorded and mixed by Laurent Dupuy (2 Grammy Awards) in the south London suburb of Croydon and filmed at Real World studios, as well as in New York City.

“This is Real” is a superb vinyl both on stage and on deck. He is fabulous as a soul man solo or in a trio or as an octet.

He learned by imitating great voices, intonations and facial expressions in order to immerse himself in this music in which he finds the values ​​that are dear to him, that speak to him.

Thomas Khan is a French singer, songwriter and guitarist. The artist is from Clermont-Ferrand. He was immersed in music from an early age (15 years old): His guitarist father and his bass player brother, both amateur musicians. Thomas Khan started in reggae, in Dub (musical genre from Jamaican reggae) and in Metal Rock. This allowed him to vent his anger when he was young. He is a very talented autodidact.

Guided by the personalities and universe of artists such as Charles Bradley, the duo Eric Burton and Adrian Quesada of the Black Pumas, the result lives up to his desire to sing.

Thomas Khan began playing in the underground, through this he acquired patience and the desire to break through. He was spotted to participate in the fourth edition of the show The Voice on TF1, he joined the team of singer Mika in 2015. This media exposure allowed him to meet professionals during the Printemps de Bourges in 2016.

Thomas Khan is dubbed “the Little Prince of Modern Soul” by Rolling Stone magazine. Thomas Khan has always had this particular tone of voice, he sings with his heart the moments of life, inhabited by Soul, in which he has been immersed since a young age.

Thomas Khan sings with his heart, he exudes real emotion, he vibrates. It is a real pleasure to hear and see him sing.