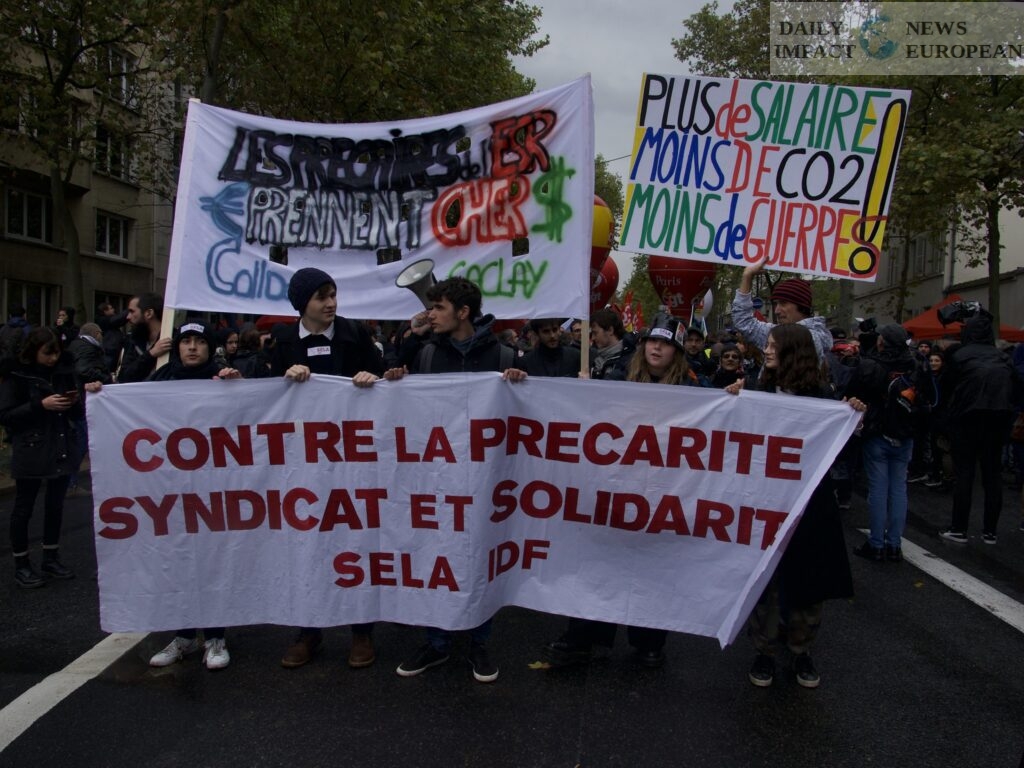 Demonstrators pounded the pavement on Thursday, at the call of the CGT, FSU and Solidaires unions and youth organizations, to demand wage increases and give a warning shot on pensions, when the executive specifies his method of reform.

Demonstrators pounded the pavement on Thursday, at the call of the CGT, FSU and Solidaires unions and youth organizations, to demand wage increases and give a warning shot on pensions, when the executive specifies his method of reform.

Government spokesman Olivier Véran hammered Wednesday that the pension reform was “necessary” and should come into force “in the summer of 2023”, regardless of how it is initiated. Emmanuel Macron had promised during the presidential campaign to raise the retirement age to 65.

The government will open a new round of consultations around the pension reform. The objective of the executive is to adopt a bill “before the end of winter”, has just announced Elisabeth Borne, after a meeting at the Elysée with the majority.

The secretary general of the CGT, Philippe Martinez, put forward “a first warning to the government and the employers so that wage negotiations begin quickly” and to point out, “since it is the news” that the French do not want to “work longer”.

“The emergency on salaries is becoming vital for a lot of people”, pleaded Murielle Guilbert (Solidaires), while for the FSU, the first education union, Benoît Teste noted a notable mobilization of teachers and said he felt mount “great anger” not to see the issue of wages treated at its fair height.

The CGT claimed, for this first day of interprofessional mobilization since the start of the school year, “more than 250,000” participants in nearly 200 demonstrations in France (against “nearly 80,000” on March 17 and “more than 150,000” on March 27 January). The Ministry of the Interior, for its part, counted 118,500 demonstrators for 179 rallies (compared to 30,800 in January and 89,000 in January). Some 40,000 demonstrators, according to the organizers, 13,500 according to the police, marched in Paris from Denfert-Rochereau to Bastille, behind a banner proclaiming: “Increase in wages, social minima, scholarships and pensions, it is urgent to act! “. Nine people were arrested in the capital.

Among the participants, there will be union representatives but also elected officials, the left-wing parties members of the Nupes and the NPA having supported this day of mobilization, as well as a group of associations.

Several thousand people (4,300 according to the police) demonstrated in the morning in Marseille. The leader of insubordinate France, Jean-Luc Mélenchon, made a quick appearance at the start of the demonstration before leaving without making a statement. Many dockers from the port of Marseille were present in the parade in which a banner of the rebellious affirmed “with the Popular Union, retirement is 60 years”, another of the yellow vests said “no to 49-3” for pension reform, a third calling for the use of “secateurs for super profiteers”.

In Nantes, there were around 4,500 demonstrators, according to the CGT and 3,200, according to the police, with many professions represented: caregivers, teachers, railway workers … On the head banner we could read: “Increase our salaries, not misery “.

In Le Havre, the prefecture announces 3,350 demonstrators. They started marching from 10:15 a.m. The dockers joined them in music at the station level a little before 11 a.m. Several unions are represented, in particular the CGT of many companies in the sector such as Total, Dresser.

In Dieppe, the procession of several hundred people left the station esplanade around 11 a.m., after representatives of the CGT and the FSU in particular spoke. Slogans, flags and cars with sound systems paced the Quai Duquesne, along the fishing port… The police counted 770 demonstrators, the CGT announced 900. The mobilization was important: the procession filled the entire pedestrian street of the Puits salé at the Quai Henri IV.

In Évreux, the procession set off from Bel-Ébat towards the city center three quarters of an hour late. Solidarity with the railway seat manufacturer Compin, which is laying off half of its workforce in Eure, was marked. The police count nearly 800 demonstrators, while the trade unions claim more than a thousand people.

Some signs spun the culinary metaphor: “Macron, give me your fridge”, “let’s eat the rich”, “metro, work, pasta in water, cellar”… In song, to the tune of “Voyage, trip”, some thundered “Work, work, beyond retirement age”.

The strike continued Thursday, at the French refineries of the hydrocarbon giant TotalEnergies, as well as at its competitor Esso-ExxonMobil, for obtaining wage increases compensating for inflation, according to union sources.