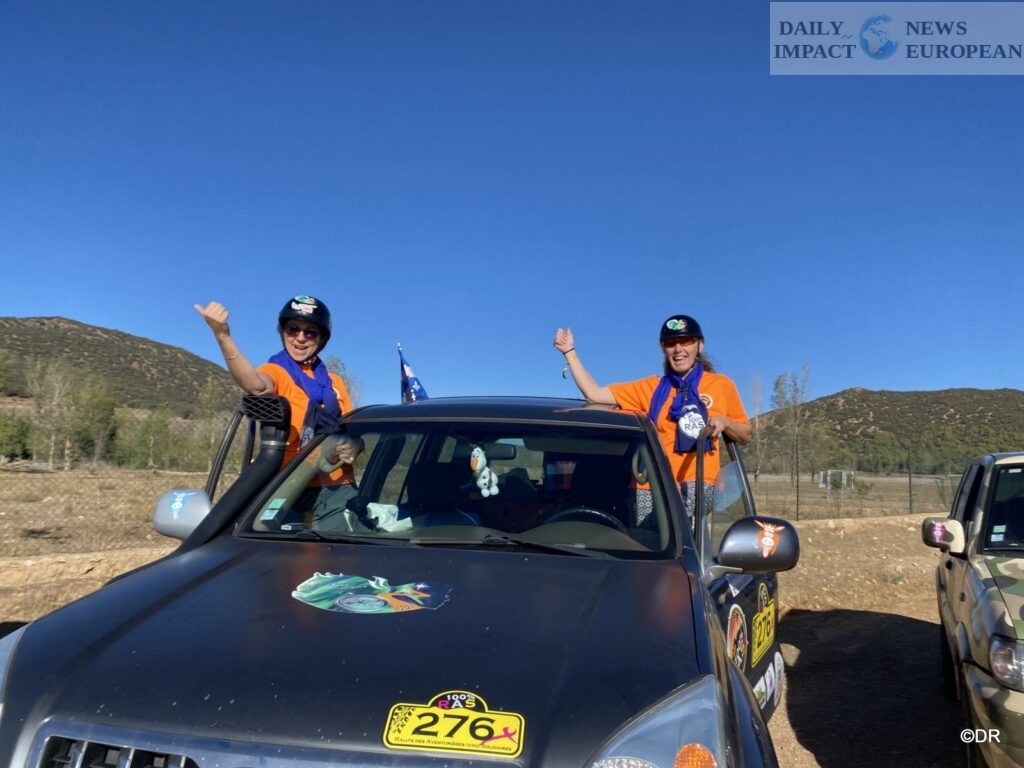 100% RAS is a women’s and mixed rally proposed by Yves Tartarin, 35 years of experience in off-road competition including 21 Dakar (3 without assistance); official driver and demonstrator at Toyota at international shows, for 5 years; French all-terrain endurance champion; 6 victories at the 24H TT Portugal and France (only participant to have participated in 28//28 editions); more than 50 participations in rally-raid (numerous victories in the Diesel category; organizer of raids; race director at the Rallye des Pionnier’s DAKHLA 2022, He also participated in the Paris-Moscow-Beijing; in the Italian, Spanish and Portuguese Bajas but also in rallies of Tunisia, Morocco, the Pharaohs and Transanatolia.

This 100% Rally, 100% Adventure and 100% Solidarity rally combines endurance, strategy, regularity, navigation, surpassing oneself and all the qualities necessary to embark on this 2022 km expedition alternating mountains, tracks, rocks, dunes and sand. This first edition took place in the north of Morocco from October 1 to October 8 between Fez and the south of Agadir, White Beach of Guelmim. It was open to duo or solo crews and was aimed at 4×4, SSV and “historic” category vehicles (more than 30 years old). The use of GPS, a Road Book, a compass and a card, was compulsory, a first for this edition, as was the possibility of having recourse to assistance.

Travel equipment containing medicines, first aid kit, toiletries, mosquito repellent, paper and towels, was requested, as were basic tools (tools, jack with board, spare parts, pressure gauge, straps) as well as 2 USB sockets and the installation of a power cable from a battery with a 3A fuse. Also provide a second phone or tablet.

For 4x4s, 1 safety kit with 10 L jerrycan (1 for water and the other for fuel), belts, straps, 1 signaling kit (triangle and vest), 1 2kg fire extinguisher, 1 compressor, clamps, bulbs, jumper cables, fuel and air filter, inner tube, 2 spare wheels. for safety, an Owaka beacon is in each vehicle. It is also recommended to take a pair of gloves, sunglasses; a hat or cap, fleece, polo shirts, pants and shorts, 2 pairs of shoes and underwear. It is also advisable to take binoculars, a computer, and a camera as well as a headlamp….

Just like in the other rallies, solidarity between competitors, crews and local populations was at the center of this first rally raid of a new kind. 100% RAS has therefore chosen to donate 70% of its profits to the Aliénor Fund of the Poitiers University Hospital to finance its research center, extend the regional center, promote innovation and the acquisition of high-tech equipment, and 30% between Morocco and France to a Medical Center to help Medical Research against Cancer.

In addition, the competitors were able to be joined at the starting point of the 1st special by accompanying persons, mechanics, friends, relatives and sponsors. The latter, who came by plane or car, were able to follow the crews by accessible roads. This is called “the Parallel Raid”.

In order to respect ecology and economy, 100% RAS practices eco-driving. This rational and controlled driving makes it possible to reduce the impact on the environment by reducing CO2 emissions and to use fuel consumption. Competitors were taught the right gestures to adopt when driving by a formation during the rally.

The rally had a playful dimension since the competitors had to bear an additional constraint by relevant “unusual objects placed on the routes such as ice identification panels or other wacky animals which earned additional points.

100% RAS also offered a collection of donations redistributed in a village located on the route of the rally between Meknes and Agadir. For this first edition, it was the children of Iztat who took advantage of it. This small village located on the edge of a cliff, in the Middle Atlas at the end of a 12 km track leading to the desert, has only its source for its only wealth.
Living from the cultivation of corn, apples, wheat and vegetables from the vegetable garden, and also owning animals, the villagers practice barter.

The only means of transport is a tractor and Hanane’s car. Living conditions are harsh in winter (snow, extreme cold) and in summer (scorching temperatures). Few women know how to read and write, literacy classes for women have been set up with the teacher, about sixty children between 5 and 12 years old are enrolled in primary school. The goal of the action of 100% RAS is to make schooling and the improvement of living conditions accessible to all children (go up to M2 before entering boarding school in large cities and schooling fully supported by the Kingdom) and that of their families (distribution of warm clothes, shoes, medical equipment, wheelchairs, canes, crutches, walkers, medicines and all school necessities:

“Education is one of the most powerful tools for lifting socially excluded children and adults out of poverty and facilitating their integration into society.”

The race strategy was based on Sport, Challenges and Conviviality. The sense of observation on the sections of the course was the best asset to gain points and win the stage. On arrival, a surprise workshop awaited the participants around fun dedicated challenges: course blindfolded or in reverse, 1 km standing start, balancing on a ramp, orientation exercise as well as quizzes on different themes.
The competitors spent a very short night “under the stars”, the other nights in accommodation were also atypical, in a friendly atmosphere but with all the comforts: Massage, Sophrology, Hypnosis, Swimming pool were there.

This stage started from Fez, the second largest Arabo-Andalusian city, known for its culture (the Clock and the Medina which date from the 13th and 15th centuries), its music and its cuisine. Fez was the capital of Morocco before its transfer to Rabat in 1912. It was listed as a UNESCO World Heritage Site in 1981 and is said to take its name from a legend concerning the prophet Idris Ben Abdellah who made the city fortified by the Berbers in 788 using a pickaxe (Fez in Arabic) of gold and silver.

The caravan arrived in Fez after crossing the Mediterranean. The last checks took place on September 30 at the Hôtel Royal Mirage where the competitors received their bib, their package containing a polo shirt, stickers in the name of the partners (Iroman Euro4x4 parts, ToyoTires, DD du Poitou, FF 4X4 and Le ladies). On the presence of a 100% British crew, a Franco-British crew and a 100% French. The stage extended over 218 km (158 km of Special and 60 km of liaison) for the mixed crews. During Yves Tartarin’s briefing, on assistance with presentations, with the first instructions. and thanks to all the members of the organization, to the doctors present at the event, as well as to Marie and Gérard Picot who designed the route.

All stages from Poitiers to Agadir

– Wednesday September 28: Departure from Poitiers (9 a.m. breakfast)
– Friday, September 30: Boat Algeciras-Ceuta then Fez by road and checks before departure
– Saturday October 1: Fez-Midelt (at the foot of the Atlas).- 258 km including 60 km liaison and 158 and 166 km of Special km
– Sunday 2 October: Midelt- Merzouga- 294 km including 128 km liaison and 166 km Special
– Monday October 3: Merzouga (small Saharan village in SE Morocco, 35 km from Moulay Ali Cherif) – link 133 km
— Tuesday, October 4: Merzouga-Merzouga-115 km including 60 km liaison and 55 km Special
– Wednesday October 5: Merzouga-Zagora (city in southern Morocco in the Drâa Tafilalet region) – 237 km including 79 km and 158 km Special
– Thursday 6 October: Zagora-Icht (village in southern Morocco in the province of Tata, attached to the region of Souss-Massa, one of the most beautiful oases in the province) – 403 km including 136 km liaison and 267 km Special
– Friday 7 October: Icht-Ksours Tafnidilt (building inspired by the traditional Ksous, built in 2000 to accommodate travellers): 302 km including 102 km link and 200 km Special.
– Saturday, October 8: Tafnidilt-Agadir or “Capital of Souss”, capital of the Souss-Massa region, prefecture of the Agadir-Ida-Outanane region, on the southern Atlantic coast of Morocco and the foothills of the Anti Atlas ): 354 km including 260 km of liaison, 60 km Special and 34 km to the White Beach of Guelmim.) Prize giving.
– Sunday October 9: Relaxing day in Agadir
– Monday, October 10: Agadir-Ceuta by road
– Tuesday, October 11: Boat Ceuta-Algeciras then road Algeciras-Valladolid
– Wednesday 12 October: Valladolid-France by road.

A 100% French podium for the general classification of the 100% RAS after a reversal of the situation for crew no. For its part, the only SSV in race n°120 did not fight well but was not on the podium, it was still 5th in the SS8 classification.
* #1 n° 138-Mellado Christel/Bechet Karine (FR) on Jeep Wrangler
* #2 n°169-Martinez Lisa/ Lebeau Jean-Luc (FR) on Mitsubishi Pajero
* #3 n°150-Martineau Sophie/Guérin Stéphanie (FR) on Toyota HDJ 80

After the awards ceremony, an evening was organized to celebrate the winners and have fun: After the effort, the comfort!

Next edition in October 2023

Supported by the partners Euro 4×4 parts, Ironman, Toyota Poitiers, FFx4, Toyo Tires, Adonis, Ladie’s, Athéna and the signs of Neuville du Poitou Point S and Sécuristest, the 100% RAS was able to gather the means and resources necessary for the realization of this ambitious project. The 2023 edition, already in preparation, will be able to take advantage of the previous one to strengthen its efficiency and offer new features such as the creation of a “solidarity” trophy in reward for the behavior of crews towards each other, a concept characterizing “the DNA of the 100% RAS” as wanted by Yves Tartarin, founding son. So many assets that contribute to the success of the second edition to come, for which around thirty contenders have already changed their interest by pre-registering on the website.