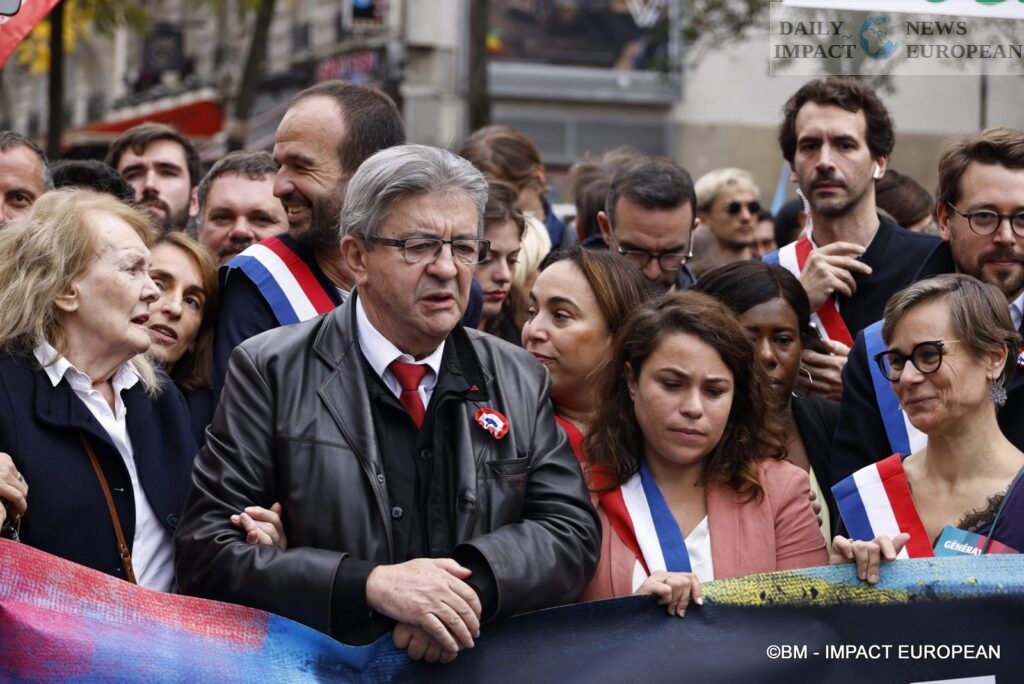 The demonstration "against the high cost of living and climate inaction" took place on Sunday in Paris, between Place de la Nation and Place de la Bastille. The organizers, the left united in Nupes, claim some 140,000 people, while the police evoke 30,000 participants.

The demonstration “against the high cost of living and climate inaction” took place on Sunday in Paris, between Place de la Nation and Place de la Bastille. The organizers, the left united in Nupes, claim some 140,000 people, while the police evoke 30,000 participants.

The left united in the Nupes organized this day of mobilization, with the support of associations and certain trade union federations. The writer Annie Ernaux, recently awarded the Nobel Prize for Literature, had taken her place at the head of the procession with various leaders of the Nupes, including the rebellious Jean-Luc Mélenchon and Mathilde Panot, the ecologists Sandrine Rousseau and Eric Piolle or the socialist Olivier Faure as well as a procession of the PCF, without Fabien Roussel.

Unofficially, the Nupes also hopes that its presence on the front line of social and environmental issues will make people forget the numerous recent cases of gender-based violence. On site, the main figures of the FI were present, from Jean-Luc Mélenchon to Danièle Obono via Alexis Corbière or Mathilde Panot, accompanied by significant support in the person of the writer Annie Ernaux, recently awarded the Nobel Prize.

Far from the headliners, in the procession of the head, yellow vests, anti-fascist activists and other autonomous groups stood together in the face of attempts to trap and disperse the police. Nearly 2,000 police and gendarmes were mobilized. From the start, they blocked the advance of the march for almost an hour. Charges, beatings, use of tear gas and de-encirclement grenades. Many clashes punctuated the mobilization, which somehow continued its way to Bastille by attacking several banks and a McDonald’s.

Jean-Luc Mélenchon had also mentioned “a huge success”, and that only a few minutes after the departure of the procession. Because basically, the leader of the Insoumis hopes that this march will have an important effect on the rest of the political news. Facing his troops, he held a particularly strong militant speech: “You are going to live a week like we do not often see. We have the duty and the political responsibility to call for the fight, the retired, the precarious, the unemployed, high school students, students who are not employees, but who are the people”.

He then continued his tirade: “We are in the process of drawing the construction of a new Popular Front which will exercise power in his country when the time comes”, he launched before warning: “Hands off pensions Mr. Macron, otherwise he will cook you”.

Will this speech convince some employees to go on strike on Tuesday? Will the 49.3 soon scheduled for the Assembly raise anger? Here are the questions that should animate the coming week and that will really determine the results of this mobilization.

With this mobilization, launched at the initiative of Mr. Mélenchon and the “rebellious” in July, the Nupes wants to contribute to the social boiling of the fall, around five major themes of claim: retirement at 60 and increase salaries ; autonomy allowance of 1,100 euros for young people; price freeze; taxation of superprofits; ecological bifurcation.