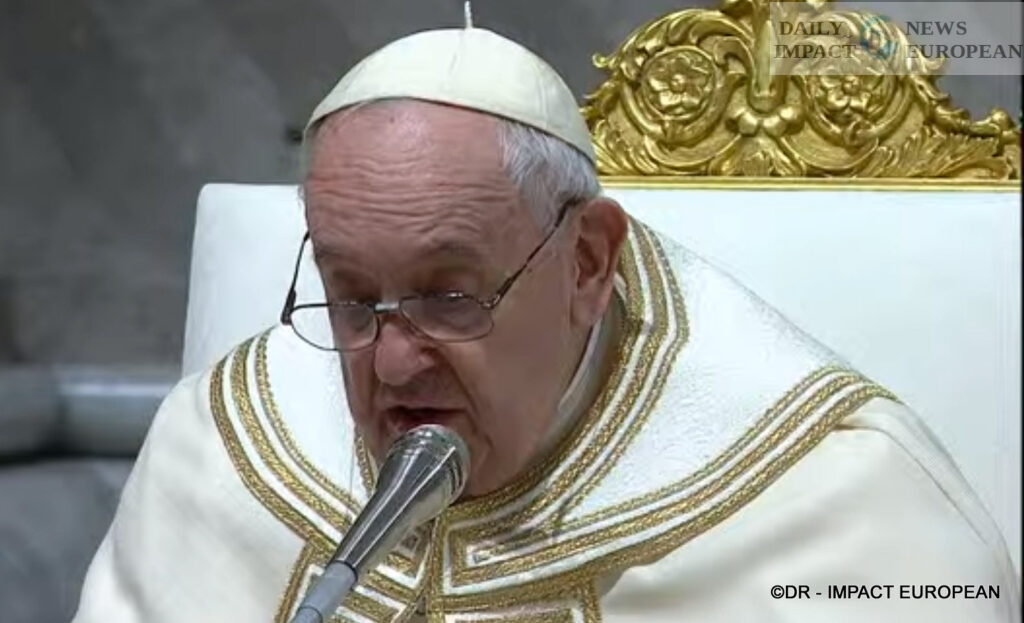 In the homily delivered on the occasion of the celebration of Vespers and Te Deum, this Saturday, December 31, Pope Francis paid tribute to his predecessor, who died in the morning at the age of 95. The Sovereign Pontiff remembered with "gratitude" his "person so noble, so kind".

At 9:34 a.m. this Saturday, December 31, at the age of 95, Pope Emeritus Benedict XVI died at the Mater Ecclesiae monastery where he had resided since his resignation in 2013. For a few days his state of health had deteriorated.

The last time the death of a former pope did not mean the end of a pontificate was in 1417. Benedict XVI, born Joseph Ratzinger, died Saturday, December 31, 2022 at 9:34 a.m. in the Vatican, almost 10 years later his renunciation, which he had announced by surprise on February 11, 2013 with the reading of a short declaration in Latin in front of amazed cardinals.

Born in 1927, the son of a policeman, into a simple and very Catholic family in Bavaria, Joseph Ratzinger was a major figure in the Church of the last century. Ordained a priest with his brother Georg in 1951, he became a doctor of theology two years later and, in 1957, he was authorized to teach dogmatic theology. He is a teacher in Freising, Bonn, Münster, Tübingen and finally Regensburg.

The last few years have been marked by the resurgence of the pedophilia scandal and by Vatileaks, the leak of documents taken from the Pope’s office and published in a book. Benedict XVI tackles with determination and firmness the problem of “dirtiness” in the Church. It introduces very strict rules against the abuse of minors, asking the Curia and the bishops to change their mentality. He goes so far as to say that the most serious persecution for the Church does not come from its external enemies, but from sin committed from within. He is also carrying out a major reform in the economic field, with the implementation of anti-money laundering regulations in the Vatican.

Many officials paid tribute to him

World and Church leaders reacted quickly to news of the death of Pope Emeritus Benedict XVI on Saturday, paying tribute to the “great theologian” and “outstanding personality”. Pope Francis paid tribute to his predecessor Benedict XVI on Saturday, hailing “such a noble person”, hours after his death in the Vatican at 95. “We fondly remember his noble, kind person. And we feel so much gratitude in our hearts,” the Argentine pope said during a ceremony at St. Peter’s Basilica in Rome, emphasizing “his sacrifices offered for the good of the Church.”

German Chancellor Olaf Scholz has said the world is losing a “significant figure” in the Catholic Church, after the former pope died on Saturday aged 95. “As a ‘German’ pope, Benedict XVI was for many, and not just in this country, a special church leader,” Olaf Scholz said on his twitter account.

French President Emmanuel Macron hailed the former pope’s efforts for a “more fraternal world”. “My thoughts are with Catholics in France and around the world, bereaved by the departure of His Holiness Benedict XVI, who worked with soul and intelligence for a more fraternal world,” tweeted the head of state.

Former Pope Benedict XVI was “a giant of Faith and Reason”, as well as “a great historical figure that history will not forget”, reacted Italian Prime Minister Giorgia Meloni. “I expressed to the Holy Father Francis my participation and that of the government in his pain and that of the entire ecclesial community,” she added in a press release.

British Prime Minister Rishi Sunak said on Saturday he was “saddened” by the death of Benedict XVI, also hailing the memory of a “great theologian”. “I am saddened to learn of the death of Pope Emeritus Benedict XVI. He was a great theologian whose visit to the UK in 2010 was a historic moment for Catholics and non-Catholics in our country,” the British leader tweeted.

I am saddened to learn of the death of Pope Emeritus Benedict XVI.

He was a great theologian whose UK visit in 2010 was an historic moment for both Catholics and non-Catholics throughout our country.

My thoughts are with Catholic people in the UK and around the world today.

The President of the European Commission, Ursula von der Leyen, recalled that Benedict XVI had “sent a strong signal with his resignation”. “He saw himself first and foremost as a servant of God and his Church. When his physical capacity diminished, he continued to serve, through his prayers”.

Pope Benedict’s passing saddens me. My sympathy goes out to all Catholics.

He had set a strong signal through his resignation. He saw himself first as a servant for God and his Church.

Once his physical strength waned, he continued to serve through the power of his prayers.

Patriarch of the Russian Orthodox Church Kirill also hailed the memory of former Pope Benedict XVI, celebrating an “eminent theologian” and defender of “traditional values”. The Archbishop of Canterbury, spiritual leader of the Anglican Church, also hailed the memory of Benedict XVI on Saturday, calling him “one of the greatest theologians of his time”.

Russian President Vladimir Putin also saluted the memory of Benedict XVI on Saturday, referring to a “defender of traditional Christian values” of which the Russian president also wants to be an apostle. “Benedict XVI was an eminent religious and state figure, a convinced defender of traditional Christian values,” he wrote in a message of condolence to Pope Francis, broadcast by the Kremlin.

United Nations Secretary General Antonio Guterres hailed the memory of Pope Emeritus Benedict XVI, who died on Saturday at the age of 95, praising in a statement his “tenacious commitment to non-violence and peace”. “His powerful calls for solidarity with marginalized people everywhere and his exhortations to narrow the growing gap between rich and poor are more relevant than ever,” the UN chief stressed.

In the homily delivered on the occasion of the celebration of Vespers and Te Deum, this Saturday, December 31, Pope Francis paid tribute to his predecessor, who died in the morning at the age of 95. The Sovereign Pontiff remembered with “gratitude” his “person so noble, so kind”.

The homily of the Sovereign Pontiff indeed focused on the virtue of kindness, which the German Pope Emeritus embodied so well. But Francis started from the one who is honored throughout the Catholic Church on January 1: the Virgin Mary, Mother of God.