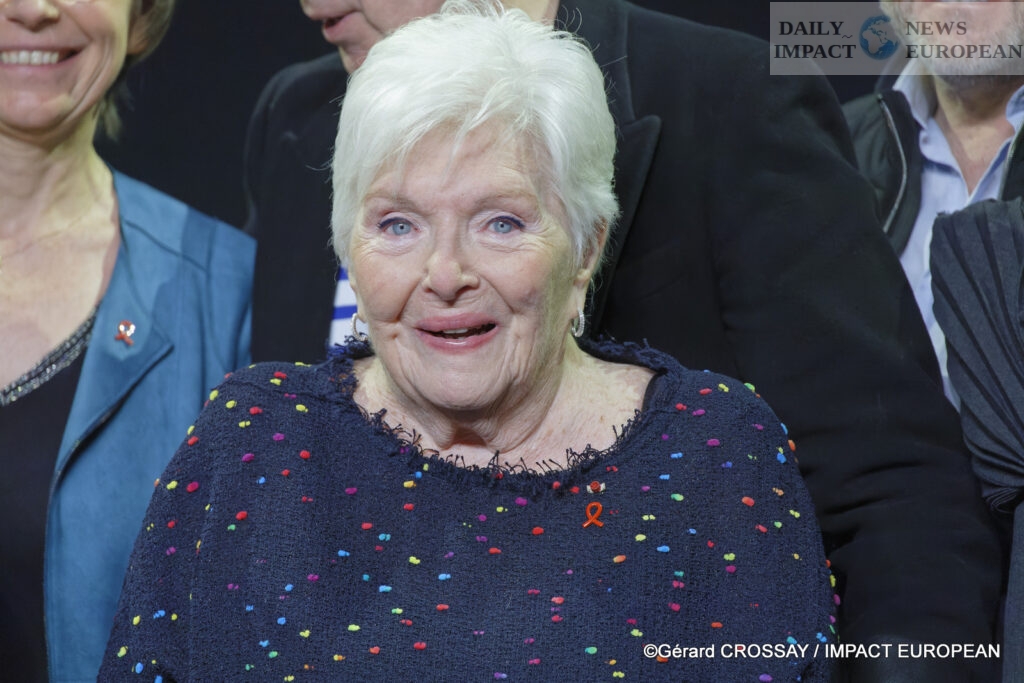 On September 2, Line Renaud was elevated to the rank of "Grand Cross of the Legion of Honor", the highest rank of this distinction, rare among artists. The former singer and magazine leader was present at the Elysée to receive this decoration from the President of the Republic, Emmanuel Macron.

On September 2, Line Renaud was elevated to the rank of “Grand Cross of the Legion of Honor”, the highest rank of this distinction, rare among artists. The former singer and magazine leader was present at the Elysée to receive this decoration from the President of the Republic, Emmanuel Macron.

The ceremony took place in the presence of the wife of the head of state, Brigitte Macron, the president of Sidaction, Françoise Barré-Sinoussi as well as several relatives of the actress. Among them, we recognized Muriel Robin and Anne Le Nen, Claude Chirac and Dany Boon whom she considers to be her “children of the heart”, but also Nathalie Baye, Pascal Obispo, Nana Mouskouri, Claude Lelouch, Pierre Arditi or Professor Jean -François Delfraissy, Jean-Pierre Raffarin or Michel Drucker.

In his speech, the President thanked Line Renaud for her actions and her commitments, including her fight against AIDS and the importation of the Sidaction association from the United States, but also for her fight for the right to die with dignity. , with the ADMD association, and following the death of his mother.
“You have never stopped your fight against this atrocious disease… This is how you have contributed to saving lives, thousands of lives, by denial of propriety, by choice of the heart.”, a-t- he declared in speaking of AIDS… “The right to die with dignity is a right which resembles you and obliges us”, he added.

Protocol obliges, it was necessary to wait for the end of the ceremony so that the person concerned could pronounce a few words of thanks in front of her loved ones. Indeed, during this ceremony, only the President of the Republic has the right to speak. Line Renaud also shared on her Instagram account, the speech she gave during the private dinner with her friends:

“Just now, my heart was beating so fast… Grand Cross of the Legion of Honor! I can’t believe it.” commented the artist, adding “The love of France is not something that can be explained. Simply because France is an invaluable gift! She gave me everything. The fulfillment of my dream of childhood, the love of the public, this public that I love so much… In return, I gave him all my sincerity, all my energy and my deepest respect”.

“I haven’t forgotten anything, especially not where I come from, nor those who made me: my mother, my grandmother, my great-grandmother. I keep a taste for effort from them, the sense of mutual aid and the joy of living. These precious baggage without which I would never have made my trip. Because yes, life is a journey and I was lucky that mine was long and beautiful. So much stars have guided my path, Loulou was my lucky star. He was a very famous composer, he placed himself in the shadows to better place me in the light.”

“My journey is not over, I still have a lot of things to do, and above all so many battles to fight”.

Who is Line Renaud?

Born July 2, 1928 in Pont-de-Nieppe in the North, Line Renaud, whose real name is Jacqueline Enté, is the only daughter of a truck driver, Edmond Enté and a shorthand typist. She grew up near Armentières and sang in her grandmother’s worker café. At 16, she joined the Radio-Lille orchestra under the pseudonym of Jacqueline Ray. She passed her first audition in Paris in September 1945 in front of “Loulou” Gasté, her idol. The result being inconclusive, she returned to Paris a year later to settle there. Loulou Gasté finds her stage name, Line Renaud, and writes her first successes.

After winning the Grand Prix du Disque with “Ma Cabane au Canada” in 1949, Bob Hope offered her a contract in 1955 for several shows in the United States, when she gave a show at the Moulin Rouge. She then performed in New York and Los Angeles and became friends with Dean Martin, Franck Sinatra and Elizabeth Taylor. Between 1963 and 1965, she performed at the Las Vegas casino and then began a career in the music hall between Paris and Las Vegas until the end of the 1970s. Back in France, she became an actress from 1981, at the theater in “Folle Amanda” and at the cinema in “Ripoux contre Ripoux”, “Belle Mamann”, “Chaos” , “Welcome to the Ch’tis” and “Cruise”. We also find it on the small screen since the beginning of the 1990s.

Back on stage in 2007 alongside Muriel Robin in “Les Fugueuses” by Pierre Palmade., then b”Très chère Mathilde (2009) and Harold et Maud (2012). scene, she released a new album in November 2010, “Rue Washington which includes 2 duets with Johnny Hallyday and Mylène Farmer. She made her first Olympia in May 2011 and in 2015 it was in the credits of 2 TV movies, “10 pour 100” by Cédric Klapisch and “Rappelle moi” by Xavier Durringer.

In 2017, she inaugurated a street bearing her name in Las Vegas, not far from Caesars Palace, then she obtained a bonus for her 90th birthday and was a great success with the film “La ch’tite famille” then the TV film with Muriel Robin. “Love you hairstyle”. In 2020, she is the oldest artist with Marcel Amont and Hugues Auffray.

In 2021, she is starring in a new TV movie, from the “Meurtres à…” series, for France 3. She obtains a new bonus in tribute to her action for Sidaction for more than 35 years, on France 2. She is also showing a TV movie, “Le Squat”, where she appears alongside Laetitia Milot and is announced in the casting of Dany Boon’s next feature film, “Le Palmier”.