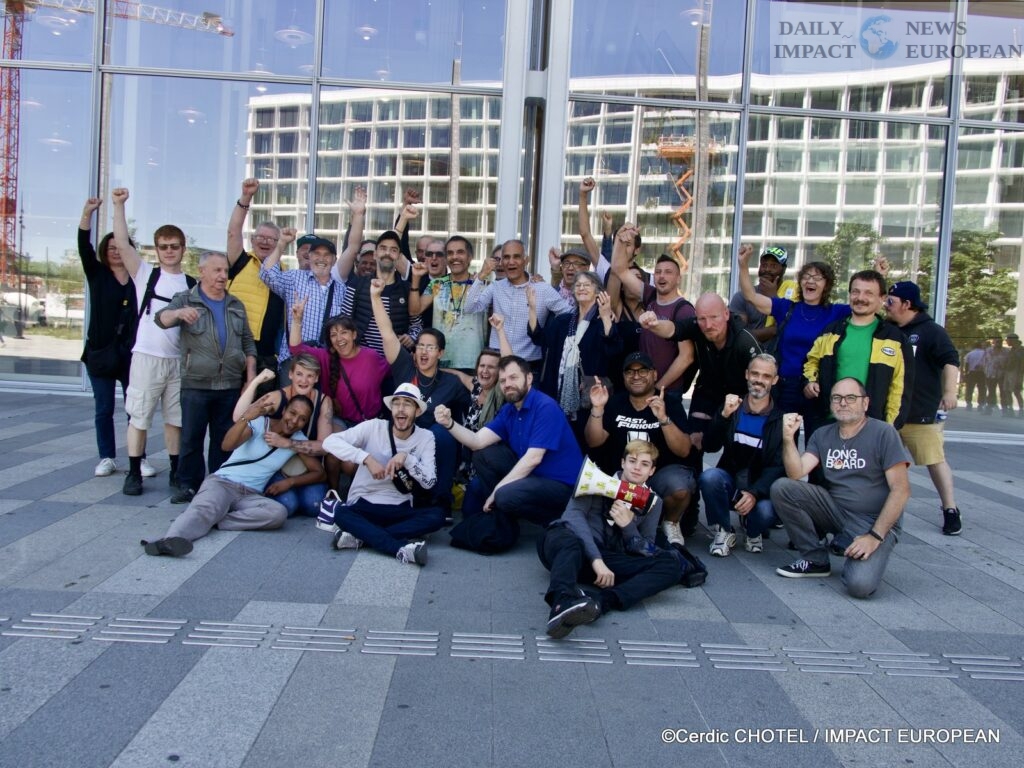 The court postponed the hearing in the Jérôme Rodrigues case, because they are overloaded and decided to use the so-called Greek calendar, which is provided for by a postponement period of between 12 months and 18 months, as is the case with Jérôme Rodrigues.

This Friday, July 8, Jérôme Rodrigues was summoned before the criminal court, for “organization of a prohibited demonstration” and “participation in a group formed with a view to committing violence”, during the demonstration which took place on February 12 in Paris.

Jérôme Rodrigues, was placed in police custody after being arrested on February 12, near the Elysée Palace in Paris, while he was taking part in the demonstration, on the charge of: “organizing prohibited demonstrations” and “participating to a group trained to commit violence”, for 48 hours, and was presented to justice on Monday February 14, and was given a summons by report for a subsequent trial before the criminal court, according to the prosecution of Paris.

“The judge of freedoms and detention did not grant the request of the prosecution to impose judicial control” with a ban on demonstrations, his lawyer, Me Arié Alimi, told AFP.

One of the best known of the “yellow vests” movement, Jérôme Rodrigues lost an eye during a demonstration on January 26, 2019, while he was filming the arrival of the procession at Place de la Bastille in Paris.

Yesterday July 8, Jérôme Rodrigues appeared before the Tribunal de Grande Instance of Paris, where he found that the hearing will not take place because 14 cases are pending and not all hearings can be resolved, they postponed the case of Jérôme Rodrigues on December 1, 2023, with the motivation that the court has a fairly long deadline due to the cases pending before the court.

Me David Libeskind, explained why the court postponed the hearing in the Jérôme Rodrigues case, because they are overloaded and decided to use the so-called Greek calendar, which is provided for by a postponement period of between 12 months and 18 months, as is the case with Jérôme Rodrigues.

Where is the two-tier justice?

Jérôme Rodrigues, explains that he is a victim of justice and of the government because he participated as a citizen in the demonstration to express the right to freedom of expression, and asks to know where is the justice that left free and forgot his file concerning the loss of an eye on January 26, 2019, place de la Bastille.
For him, justice is two-tiered, one is entitled to an elevator and the other to stairs, everyone is judged differently, a policeman has not been tried for 4 years and I can be brought to justice in 2 months and half. “Where is the justice?” asks Jérôme Rodrigues.

“If there is a message to send today, it is to support all those who have fought for their rights and who are in difficulty, and who pay by their own justice, because they have no no right to real justice, those who are fighting, that, they need solidarity, they have been fighting for 5 years (…) all those who shout against the strikers, no matter how late they are because they don’t arrive on time on vacation, they also take you to your destination so that you can enjoy the vacation, respect them, they fight for everyone, (…) try to be responsible for you, for your families, don’t wait for the yellow vests to intervene, get moving”, (…) “today there are people who are waiting to return to work as in the case of nurses, there are people waiting to be able to eat or pay rent, (…) get moving, politicians, get to work because we are here to watch you”, explains Jérôm and Rodrigues.

“I don’t feel guilty, we all know prisons are full of innocent people, I have no reason to feel guilty, I alone haven’t organized anything and I can’t create a violent movement, after losing an eye I suffer a lot but I don’t ask for violence and I don’t resort to violence, they destroyed my eye I don’t want a mother or a little kid to live my sufferings that I endure daily they are extremely stupid I could ask from my hospital bed to revolt and Macron could I have resigned the next day but I don’t resort to revolt I prefer to call for peace “, said Jerome Rodrigues.

Jérôme Rodrigues, will appear in more than 18 months on December 1, 2023 at 1:30 p.m., on the charges brought on February 12, 2022, after having spent more than 48 hours in police custody, for: “organization of prohibited demonstrations” and ” participation in a group formed with the aim of committing violence”, a file which is empty and there is no evidence, as explained by Me David Libeskind.