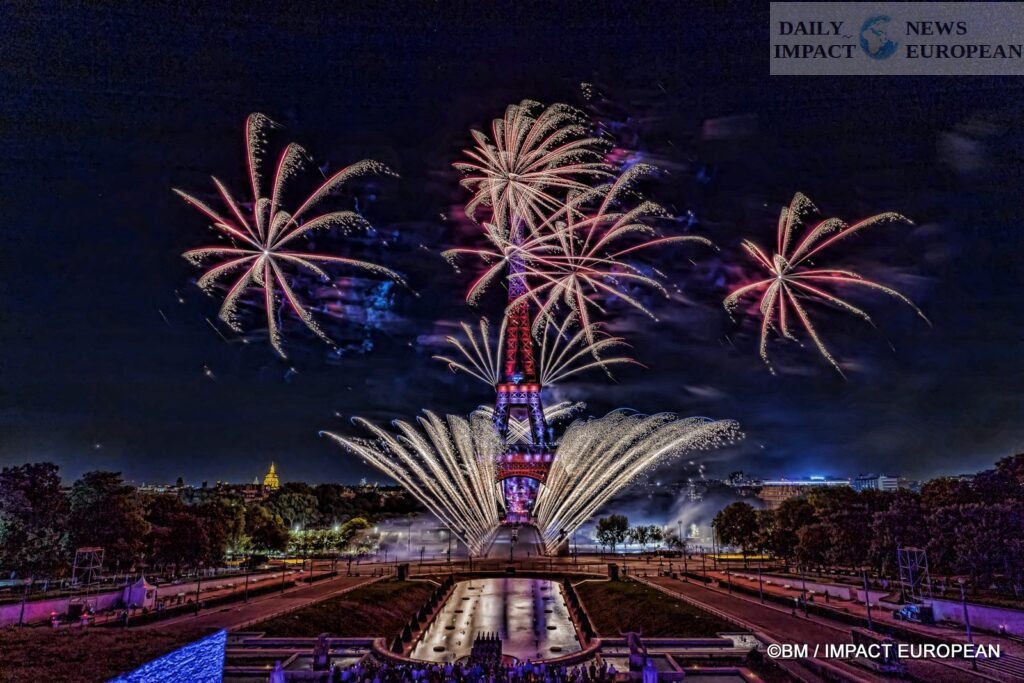 July 14, 2022 was marked as every year, with the exception of 2020 due to a pandemic, by its military parade in the morning and its fireworks in the evening, preceded by a classical concert.

July 14, 2022 was marked as every year, with the exception of 2020 due to a pandemic, by its military parade in the morning and its fireworks in the evening, preceded by a classical concert.

The theme of the military parade in the presence of the President of the Republic and his government was: “Sharing the flame”. He was referring to the army-nation link, to the flame of the Resistance embodied by Hubert Germain, the last companion of the Liberation, who died last year and to the Olympic flame that France and Paris will welcome in 2024.

The parade on the Champs Elysées began with the passage of troops invited from 9 Eastern European countries neighboring the Ukrainian-Russian conflict (Estonia, Latvia, Lithuania, Poland, Czech Republic, Slovakia, Hungary, Romania and Bulgaria). It was then the turn of the French troops and the air parade.

As every year for 10 years with the exception of 2020 due to the pandemic, the great symphonic concert of classical music was held at the foot of the Eiffel Tower, before the fireworks. Organized by the Orchester National de France, the Maîtrise and the Choeur de Radio France, it was presented by Stéphane Bern and welcomed the greatest international soloists, including pianists Sara Ott and Jérôme Ducros, violinist Leonidas Kavakos, cellist Gautier Capuçon, soprano Nadine Sierra, mezzo Léa Desandre, tenor Stanislas de Barbeyrac or bass-baritone Erwin Schrott. on the program, Berlioz, Verdi, Offenbach, Mozart, Grieg, Tailleferre, Enesco, Rameau, Ravel, Lehar, Bizet, Bernstein and the Marseillaise.

Taken from the Eiffel Tower and the Jardins du Trocadéro, the long-awaited fireworks display had the theme “Liberty” in opposition to the confinement that we experienced. From 11 p.m., Parisians and tourists were able to meet at the Champ de Mars to admire the 14 different paintings for nearly 20 minutes. Others settled on the bridges or joined elevated places like the Parc de Belleville, the Butte Montmartre or the Parc de St Cloud. Finally, there are those who enjoyed the show from their living room, in front of the television set, because the concert and the fireworks were broadcast live on France2.

Produced again this year by the Ruggieri company, under the artistic direction of David Proteau, the 2022 fireworks display was meticulously prepared by the company. A week before the event, the pyrotechnic elements arrived from Spain and Toulouse, where the David Proteau company is based, in 7 semi-trailers. the Eiffel Tower, closed to the public for the occasion. Other starting points were on the Pont d’Iéna and the 2 banks of the Seine.

On D-day, at zero hour, a hundred people, including 14 pyrotechnicians, were at the controls in order to create the 14 paintings planned during the show, On the theme of Freedom, Carpe Diem (let’s take advantage of the present day), the paintings followed, among which was the “Marseillaise” taken up by the public, then a tribute to Régine, who died on May 1, to the sound of her essential “Petits papiers. Each painting was accompanied by an appropriate musical piece, including Stromae, Orelsan, Prince, Phil Collins or Bilie Eilish.all synchronized.Another significant event, the tribute to Ukraine showing an Eiffel Tower in Ukrainian colors, yellow and blue, to the sound of “Stefania”, title of the winning group of Eurovision, Kalush Orchestra.

After this success, see you next year with a new pyrotechnic show, a new soundtrack and another theme.