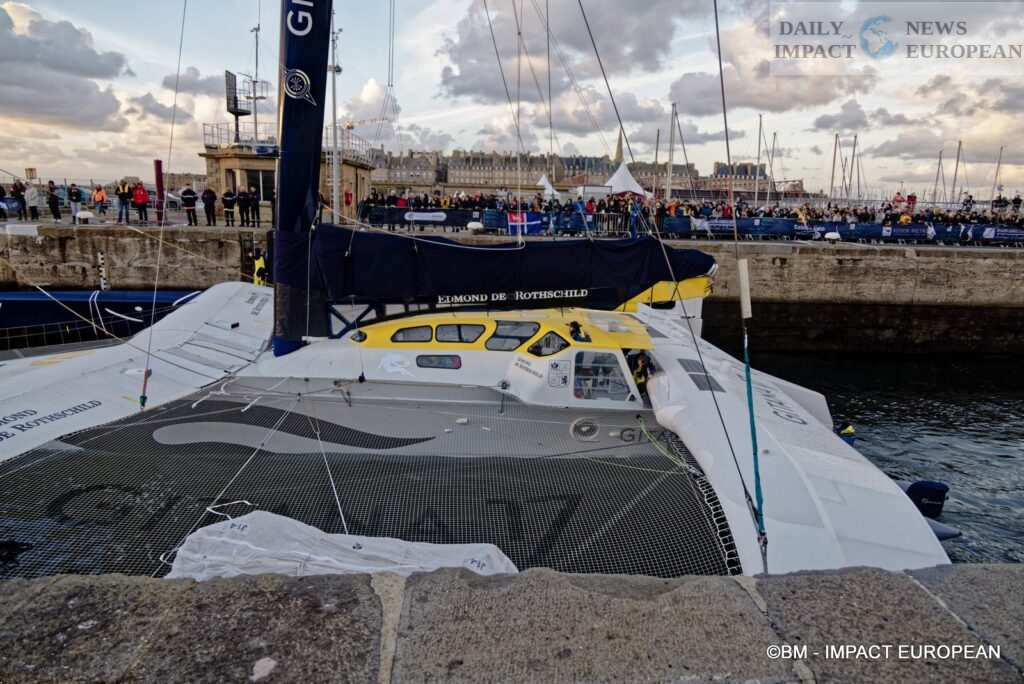 The first sailor on the Route du Rhum to Guadeloupe arrived at 10:02 a.m. (Paris time) in Pointe-à-Pitre.

The first sailor on the Route du Rhum to Guadeloupe arrived at 10:02 a.m. (Paris time) in Pointe-à-Pitre.

Charles Caudrelier’s Ultim (Maxi Edmond de Rothschild) and set a new record in 6 days, 19 hours, 47 minutes and 25 seconds. François Gabart (SVR-Lazartigue) is expected around 1:30 p.m. An arrival bereaved by the accident of a follower boat which killed two people.

The 48-year-old French skipper won the greatest victory of his career after winning the Transat Jacques Vabre three times (2009, 2013, 2021) but also the Solitaire du Figaro and the Ocean Volvo Race twice.

Charles Caudrelier did not follow the usual curriculum for young sailing geniuses. A graduate of the merchant navy, the navigator from Paris could have taken to the road on much larger boats and watched the Route du Rhum from a port on the other side of the world. This is also how he started, as an officer on a ferry, but he quickly set his sights on sailing, which he discovered as a teenager.

This great admirer of Laurent Bourgnon – twice winner of the Route du Rhum and winner of a Transat Jacques Vabre before disappearing in 2015 during a dive in French Polynesia – then joined the Port-la-forêt training center in 1999 before knowing the success that we know him.

According to information from Guadeloupe the first, an accident at sea took place this Wednesday, November 16, the day of the arrival of the Route du Rhum, won this year by Charles Caudrelier. A boat capsized one mile from the finish line with 12 people on board. Two of them could not be revived. The motorboat hit another spectator vessel.

The Regional Operational Center for Surveillance and Rescue Antilles Guyane was quickly dispatched to the scene and a boat from the French Navy rescued the twelve shipwrecked people.

All the people were rescued by the French Navy but two of them could not be revived. A person would have been trapped under the hull of the boat.

A judicial investigation has been opened for manslaughter, said the Pointe-à-Pitre prosecution.

By winning this 12th edition in the Ultimes category, Charles Caudrelier has become, in a way, a historical monument. Ocean racing historians would later come to visit him and ask him to tell his race through anecdotes. Not sure he enjoys doing the guided tour.

Caudrelier-Cammas, a long road together

First of all, it’s the story of two friends. When he decides to set sail, far from the super-containers, Charles Caudrelier finds in Franck Cammas a perfect mentor to enable him to perfect his apprenticeship. And the “kid” learns quickly. He is his router, understand the one that serves as a weather GPS to best guide the navigator, in 2010 when Franck Cammas won the Route du Rhum. He then embarked alongside her for a new triumph, in the Volvo Ocean Race in 2012.

At the helm of Gitana 17, Cammas has finally handed over the controls of his boat, after three years on board, to Charles Caudrelier. And the circle is finally complete, because it was Franck Cammas who did the job of router for his friend during Caudrelier’s victory on Wednesday in Guadeloupe. 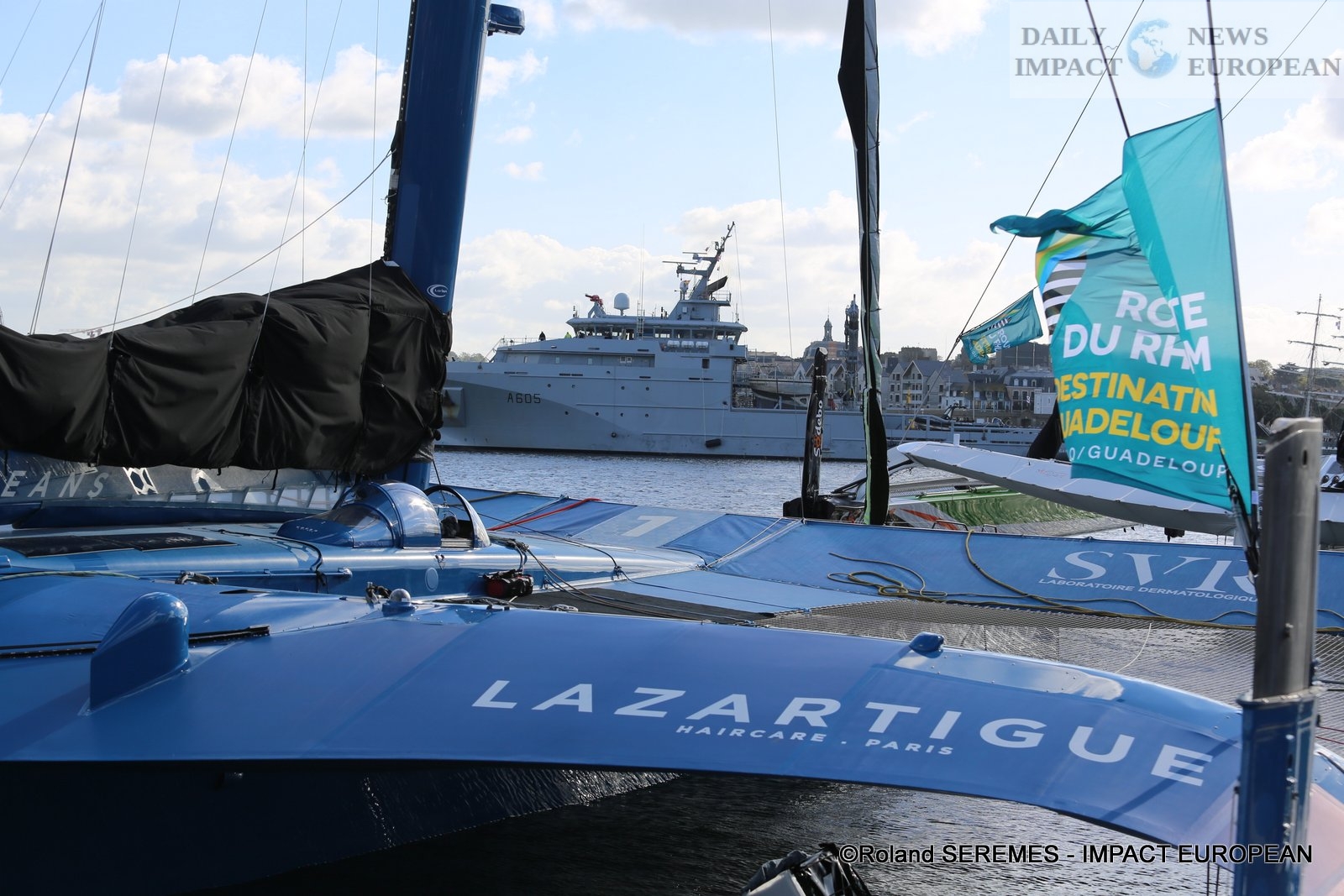 Thomas Coville on Sodebo Ultim 3 also remained in contention with the two leading boats throughout this year’s Route du Rhum and was close enough to constantly put pressure on Gabart in second place. This morning, however, his team reported that he caught a fishing net on his final approach to Guadeloupe.

Above all, this Route du Rhum solved many reliability problems for the giant Ultimes, without any significant incident after Armel le Cleac’h on the Maxi Banque Populaire XI suffered foil damage at the start (he was able to repair and set off again later).

What you must remember :

– At 1:39 a.m. last night, just after passing the Azores in 8th position, Axel Trehin suffered major damage with the breakage of his spreader. The skipper of the Class40 Project Rescue Ocean has however managed to preserve his mast and is heading to Ponta Delgada in the Azores to consider the possibilities of repair.
– Around 3 a.m. on Wednesday, Matthieu Perraut arrived at the quay in Punta Delgada. As a reminder, the skipper of Inter Invest had suffered a violent collision with an UFO last Monday, then heavily damaging his Class40.
– Jean-Pierre Dick (Notre Méditerranée – Ville de Nice) is expected in the morning at Ponta Delgada where he will drop off Brieuc Maisonneuve (CMA – Île de France – 60,000 Rebonds) whom he had rescued on Sunday.
– Faced with some technical problems, Baptiste Hulin, (Rennes / Saint-Malo / Parenthèses de Vie), Emmanuel Le Roch (Edenred) and Andrea Fornaro (Influence) have planned a technical stopover this Wednesday on the island of Sao Miguel , in the Azores.

– While en route to Spain following sail and engine problems, Erwan Thiboumery (Interaction) found himself pushed ashore in difficult wind and sea conditions. The skipper had to resign himself to abandon his boat and was airlifted. Erwan, who has returned to land, is fine but his boat ran aground on Ferreira beach.

– Jean-Pierre Dick (Notre Méditerranée – Ville de Nice) is expected in the middle of the night at Ponta Delgada where he dropped off Brieuc Maisonneuve (CMA – Île de France – 60,000 REbonds) whom he had rescued on Sunday.

– Daniel Ecalard (Sos Pare Brise +) arrived yesterday evening at 23:45 UT in Baiona in Galicia to repair his pilots and wishes to resume his race as soon as possible.

– 2 Class40s have planned to make a technical pit-stop at Ponta Delgada on the island of Sao Miguel in the Azores: Emmanuel Le Roch (EDENRED) and Andrea Fornaro (Influence)

– In total, following the withdrawal of the Croatian Ivica Kostelic (ACI) in Class40, 22 solo sailors were abandoned: 14 in Class40, 4 in IMOCA, 3 in Rhum Multi, 2 in Ocean Fifty. There are 116 sailors in progress.