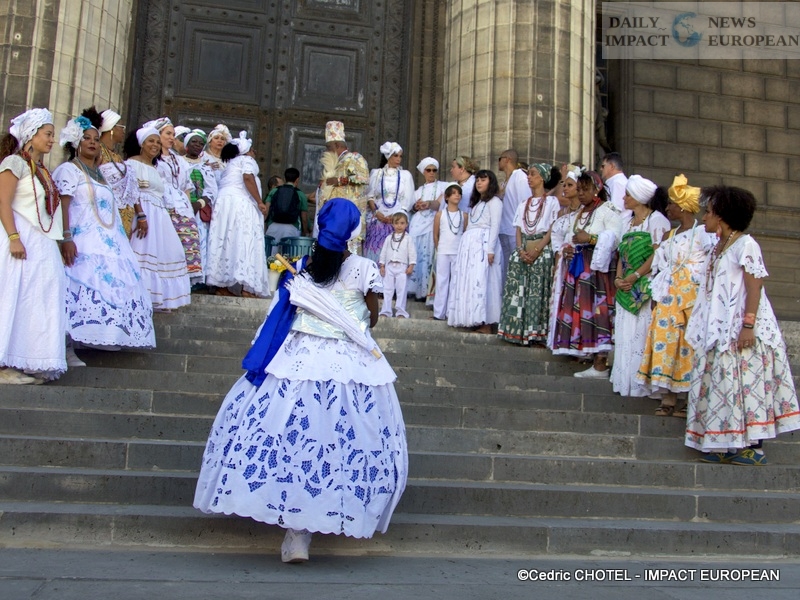 For its 20th anniversary, the "Washing of the steps of the Madeleine" parade takes place on Sunday, September 4, 2022. For 4 days, from September 1 to 4, Brazilian culture, its music and its dances meet Parisians and tourists for a festive event in the streets of Paris, from Place de la République (75010) to the church de la Madeleine, on the rue Tronchet side. (75008).

For its 20th anniversary, the “Washing of the steps of the Madeleine” parade takes place on Sunday, September 4, 2022.
For 4 days, from September 1 to 4, Brazilian culture, its music and its dances meet Parisians and tourists for a festive event in the streets of Paris, from Place de la République (75010) to the church de la Madeleine, on the rue Tronchet side. (75008).

Since 2002, thousands of participants and personalities from the cultural world have shared this great festival bringing together capoiera, samba, percussion or the replica of the “Lavagem de Bonfim” washhouse. while discovering the folk traditions of Brazil. For the occasion, the participants are dressed in white, just like the public. The traditional procession is made up of floats, batucada and folk groups that take part in a procession that ends with the washing of the steps of the Church of the Madeleine.

The tradition of washing the steps of the Madeleine dates back to 1773, it originated in Bahia. At the time, the custom was to wash the churches of the region, among which was that of Nossho Senhor du Bonfim. Second most important event in Bahia after the carnival, it was declared Brazilian intangible cultural heritage in 2013. Appointment in force in Salvador, it mixes Catholic saints and gods of the African pantheon. The goal is to purify the city of evil spirits, the inhabitants gather in the streets before going to wash the stairs of the Nosso Senhor do Bonfim church.

The first Parisian washing took place at the Sacré Coeur (75018), then from 2002 at the Eglise de la Madeleine (75008). The preceding parade has been leaving for the past few years from Place de la République (75010) and passes through the Grands Boulevards to reach the Church of the Madeleine. A market of traditional Bahian products is set up on the Place de la Madeleine, which is located behind the church.

In Paris, the Wash takes the form of the Festival of Brazilian Culture, while retaining the more traditional and ritual part: the sweeping of the steps of the Church of the Madeleine. This ritual is carried out by women who wear traditional Bahian white clothes, after the prayer of the Catholic priest of the Madeleine and a babalorixa (supreme priest of Candomblé), who came from the region of Bahia. They throw, with the help of other people, perfumed water and flowers, then they sweep the steps in front of the church, in the middle of the crowd concentrated in front of the church

The participants dressed in white parade alongside artists from Bahia, to close the Festival which offers concerts, parties and also a mass for 4 days. About fifteen dance and percussion groups follow the procession, to La Madeleine.

The parade incorporates different expressions of Bahian and Brazilian culture: at the head of the procession are Bahian women dressed in white, accompanied by the pai de santo (same as babalorixa), who performs a candomblé ritual (padê de Exu) in the street , at the start of the parade. In the second row follows the batucada ensemble Batalà, which has participated with its festive percussion in the Lavage de la Madeleine since the first edition. Then there are other percussion groups (batucada and other styles, such as the maracatu), but also various capoeira and group dance teams; the majority of them are also dressed in white too. An eletrico trio (truck equipped with sound) closes the procession, to offer a traveling concert of popular Brazilian music.

Roberto Chaves is president of the Viva Madeleine association and creator of the Paris fashion show. Born in Santo Amaro de Purificaçao, state of Bahia, he is passionate about poetry, theater and dance. He even composed his own songs. In 1990, he was noticed by the artistic director of the Paradis Latin. He is also known for his songs. Today, he is divided between France and Brazil where he performs in concert. In 2020, he resumed his studies in international relations. In May 2021, he was decorated by the presidency of the French Senate for his work, his investment and his involvement in relations between Latin America and France.

.Cristina Cordula, the most Parisian of Brazilians, presents her program “Les reines du shopping” on a French television channel. She shares her enthusiasm, her love for Brazil and her joie de vivre with the public for this colorful event. She has been the sponsor of the event for several years.

Vincent Cassel is in love with Brazil. He has supported the event since 2016.

Ana Carolina Dalcolmo is the event’s ambassador. A fashion and beauty influencer, she has lived in Paris since 2017 but has not forgotten her native country, which she left to fulfill her dream by working in fashion and communication. Thanks to this, she represents the Lavage de la Madeleine on social networks.

Ton Britto is the ambassador of Lavage de la Madeleine. Influencer, fashion and lifestyle hairstyler, he has lived in Paris since 2018 but is originally from Bahia in Brazil. Since then, he has created original hairstyles and trends there. He also covers the event on social networks and with the press.

Meet at Place de la République at 11 a.m. for a departure at 12 p.m. and an arrival at the Madeleine at 2 p.m. where the cleaning of the steps will take place. End of the event at 3 p.m.

The + of the parade

For those interested, a Brazilian dance course (Samba, Zumba, Reggae) was organized on Saturday September 3 between 2:30 p.m. and 5:30 p.m., in order to train and learn the choreography.

A closing party took place from 5 p.m. at the Palais Maillot, hosted by the Roda group from Saba Bokaloka. and with Bianca Coasta, Emiliah&Italo Coutinho as guests.