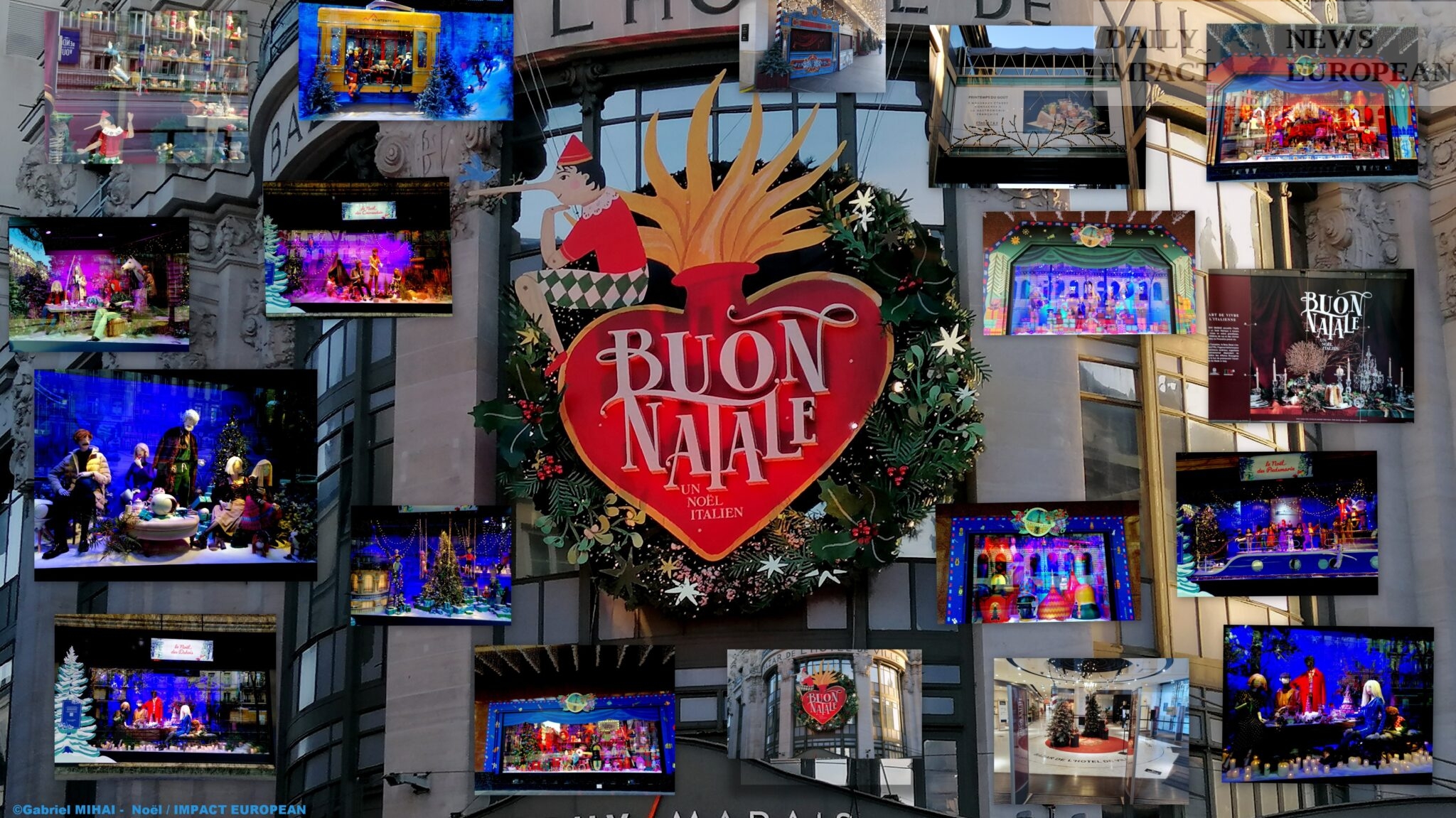 Since 1909, department stores have had the habit of hiring great decorators to stage their windows and attract passers-by.

This year again, Paris lights up for the end of year celebrations and the department stores display their Christmas colors.

Every year, tradition dictates, department stores are adorned with illuminations to celebrate Christmas. Sketches enliven the windows of Printemps Haussmann, Galeries Lafayette, BHV and Bon Marché. Since 1909, department stores have had the habit of hiring great decorators to stage their windows and attract passers-by.

Despite the health context, the closure of non-essential stores since October 30, the decoration of the windows has not departed from the tradition prepared in August. In fact, every year, nearly 150 people rally around a different theme.

If the department stores are closed for the moment, their windows still show the festivities while waiting for their reopening.

A modern and contemporary design animates each of the windows, full of fantasy, dreams and emotion. Princesses and knights appear in a castle setting for a selection of toys from the catalog.

The second to open the festivities, Printemps Haussmann opened its windows on November 12 on the theme: “Let’s share Christmas”. Each year, Printemps joins forces with a different partner to let the big brands (Longchamp, Fendi, Jimmy Choo, Louboutin, Canada Goose, Burberry) express themselves.

Each display shows a different family celebrating Christmas Day. The paintings mix the styles, morphologies and origins of the characters who meet to celebrate the magic of Christmas together. They are found both at sea and in the mountains, in a chalet, in a garden or in the forest, on the water or on the road or even on the roofs. A total of 92 figurines make up the 9 families and groups that celebrate Christmas.

The Printania, Piedmarin, Polyphonie, Dujardin, Toutchuss, Dubois, Courandair, Deschamps and Millebornes families celebrate in the middle of the sets. The 4 animated windows show 65 miniature characters dressed in handmade and tailor-made costumes, from silhouettes at the crossroads of all trends, the accessories have been made from 3D prints.

In addition, 185 Christmas trees are installed in and in front of Printemps Haussmann, for a set of 3,400 meters of light garlands.

“Buon Natale in Italia” is the Christmas theme at BHV Marais. From November 12, 2020, the decorations arrived at the store on rue de Rivoli. Laser lights, stars and colorful display cases gave pride of place to automatons and puppets. This year, the ephemeral cinema offers Italian films to see for free. Workshops are open to make your Christmas decoration, learn to cook Italian cookies and “enchanted surprises”. The Italian art of living will enchant you with Eataly Paris Marais, an exclusive selection of the best know-how in gastronomy, craftsmanship and design.

The Galeries Lafayette have chosen November 18 to inaugurate their windows in a select committee. The theme this year is “Journey to the Moon”, in reference to the eponymous film. Young and old will be able to travel to imaginary lands all around the world in the company of Céleste, a young intrepid explorer.

The Christmas movie is a Netflix production for the holiday season. It was accompanied by a promotional campaign before its release from October 23 on the platform. It tells the story of Fei-Fei, a determined young girl, who wants to build a rocket to get to the moon.

From October 26, you could find her universe in a pop-up store at the entrance to the Coupole store and on the 5th floor. The French pastry chef Cédric Grolet will present the “Moon Cake”, inspired by the film. The pastry is available in 3 flavors: chocolate orange / coconut lemon pepper from the tops / peanut black sesame.

All profits from sales will be donated to the Cékedubonheur association, committed to bringing happiness to pediatric health establishments (workshops, outings, events, outings, meetings of personalities) but also to finance development projects within the services ( helps maintain social ties, contributes, in partnership with medical and educational staff, to the fight against isolation linked to the difficult context of hospitalization).

The showcases reveal 11 paintings (the stages of Celeste’s journey around the world). The string puppets evolve in settings such as the polar voyage, the enchanted forest, the stopover of 1001 nights or the festival of lights.

Finally, like every year, the big tree stands under the dome, its decorations tell of Celeste’s last trip. Every 30 minutes, the lights go out to make way for a sound and light animation.

Illumination of the Champs Elysées

The mayor of Paris has chosen the date of November 22 for the launch of the illuminations of the most beautiful avenue in the world. Despite the pandemic, the Champs Elysées Committee in partnership with Ferrero, have decided to maintain the event until January 6, 2021, from 5 p.m. to 2 a.m. All night long on December 24 and 31. This year, the singer and actress Louane was the godmother of the 2020 edition. The Mayor of Paris, Anne Hidalgo and the Mayor of the 8th arrondissement Jeanne d’Hauteserre as well as the president of the Champs Elysées Committee, Jean-Noël Reinhardt were at its ratings.

Last year, 70,000 people attended. This year, following the pandemic, the kickoff was digital, for the first time in 40 years of existence. The committee involved 15,000 people registered on its site to give this unprecedented kick-off. Everyone was able to light a light bulb at home, via an online platform. Like last year, the theme “Flamboyance” made the capital shine red.