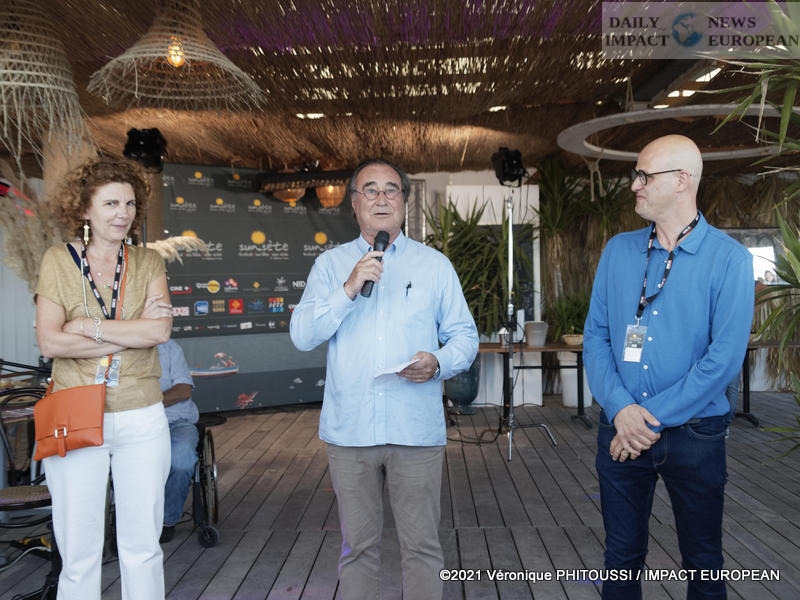 The Inauguration was held on the private beach ” La Canopée ” in Sète in the presence of François Commeinhes, Mayor of the city of Sète, Laurent Mesguich, President and founder of the Sunsète Festival, Emmanuelle Caquille, Artistic director for the Sunsète Festival , Claude Gendreau-Muslin, Deputy Mayor, Jeanne Corporon, Deputy Mayor of Sète in charge of the Centenary of Georges Brassens, Serge Regourd, President of the Culture and Audiovisual Commission at the Regional Council, representing Carole Delga, President of the Occitanie region , Pyrénées-Méditerranée, Gilles d’Ettore, Mayor of the city of Agde and his partner were also present as well as Vincent Truc.

Indeed, this presentation is new in the sense that it addresses a Festival, A Film, A Series unlike previous editions which presented a selection of short films with a Gold Urchin designed by Xavier Llongueras, Trophy awarded to the winner of the best short film by a jury as well as many other prizes with an Honorary President and guests.

Following the major upheavals due to the COVID crisis, the changes in the consumption of leisure, culture and life, which this crisis has generated ; The Sunsète Festival realized that the Cinema could be viewed on several media, in several ways and that it could also be done more quickly with less financial means and could be distributed on platforms, new broadcasting media.

This 5 th edition presented in parallel films and series in which the public discovered filmmakers, authors (facilitators), actors (rices), actors (iennes) both in their role behind the camera than in front as an actor. It is no longer the medium that makes the cinema, but the talented men and women who use the various existing media in perpetual evolution.

Round Tables were held with directors, actors and producers who came to give their opinion on their respective professions with Stéphanie Chermont as mediator of the Round Tables ; Olivier Rosemberg, actor, Julie Piaton, actress, Louise Coldefy, actress, Catherine Alric, actress also came to discuss their role in both films and series.

The Sunsète Festival, revisited, made a success thanks to the whole team of volunteers, the partners, the technical team allowing the public to watch the films either indoors or outdoors.

It was a very nice opening night accompanied by Paul-Éric Laurens, journalist and by a musician for the musical atmosphere.