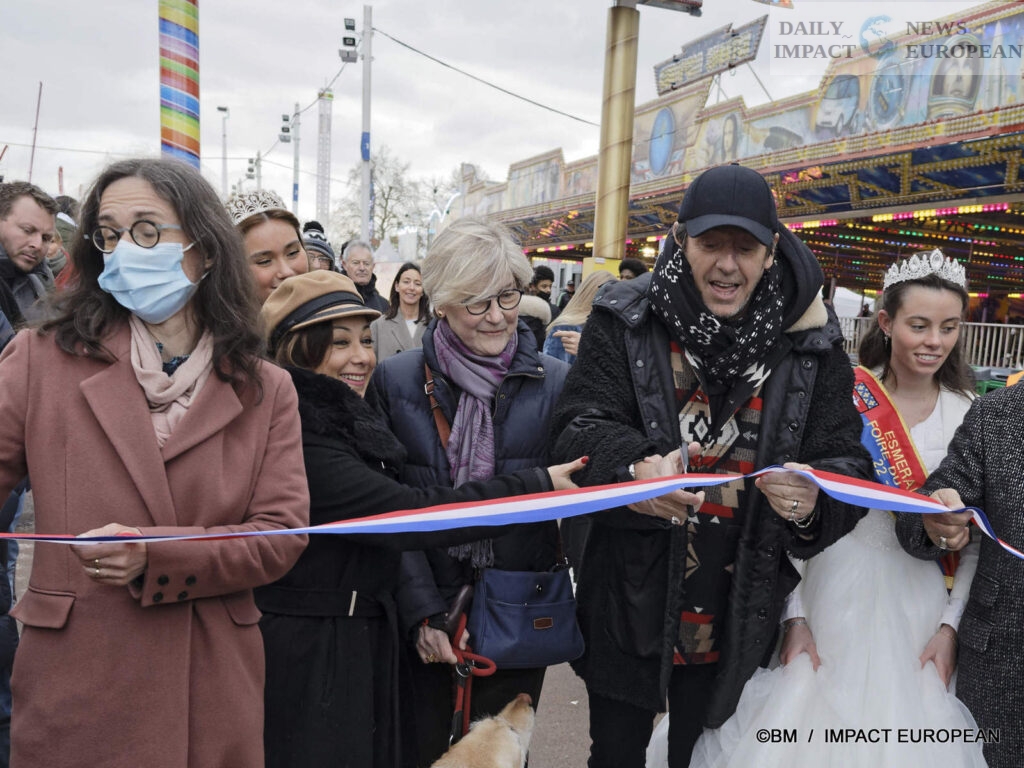 the money collected during the inauguration is redistributed to the "Voice of the Child" Association, an association that helps child victims of violence around the world. Given the tragic events of the war, Ukrainian children will bless them.

No, it’s not April Fools! There was indeed snowfall in Paris on April 1, the day of the inauguration of the Foire du Trône.

Created in 1957 under the name of “Gingerbread Fair”, the Foire du Trône is one of the oldest carnivals in Europe. It also holds several records such as that of the most illuminated Ferris Wheel in Europe, the longest dismountable “Grand 8” in France or the longest “Ghost Train” in France, which changes scenery with each edition.

After 2 years of absence following the pandemic, the Foire du Trône is back, Pelouse de Reuilly (75012) from April 1 to June 6, with Troni, its new mascot, a reference to the famous gingerbread pig, Fair emblem.

On the program, nearly 320 attractions and 80 rides. which will welcome 4 million visitors expected after this long wait, according to Louis Joubert, president of the Foire du Trône
They will be open until 11 p.m. from Sunday to Thursday and 1 a.m. on Fridays and Saturdays.

To the delight of young and old alike, the candy stands offered candy apples, cotton candy, marshmallows, pancakes and donuts as well as other delicacies. For those who were a bit peckish, several food stalls.

With the attractions of previous editions including “Starlight” and its nacelle at 20 meters high or the “Spin Ball” to experience thrills for 3 minutes in rotation at 8 meters high, at a power of 4G, all 2 new from 2019, novelties appeared in 2022. Among them are the swing “Free dance”, another model of “Rotor”, the turntable “Tikki party” and a new carousel for children. For its part, the “Ghost Train” inaugurates a new course of rails and new characters.

Louis Joubert, who is fighting for the Foire du Trône to be recognized as an event in its own right for the culture of the city of Paris, like the circuses, presents his new 2022, “Lenny’s Car”. She is named after her 10-year-old grandson.

Inauguration for the benefit of the children of Ukraine

For this 1062nd edition, the money raised during the inauguration is redistributed to the Association “La Voix de l’Enfant, an association which helps child victims of violence in the world. Given the tragic events linked to the war , Ukrainian children will benefit.

The principle of this operation is based on the sale of bracelets, worth 10 euros from 2 p.m. to 11 p.m. on Friday April 1st. They entitled a 50% discount on all rides.

The inauguration ceremony took place in the presence of Emmanuel Grégoire, first deputy Mayor of Paris and Emmanuelle Pierre-Marie, Mayor of the 12th arrondissement. The spokesperson for the association, Bruno Solo and the sponsor of the Foire du Trône, Jean-Luc Reichmann were surrounded by many personalities including Caroline Margeridon, the buyer of the program Affaire concluded” or even Martine Brousse, presents the the association.

Chez Vincent, the guests were able to meet in a festive atmosphere

As every year, special days will take place including the Portuguese Day, the Chinese Day, the Cavalcade and the Fireworks.