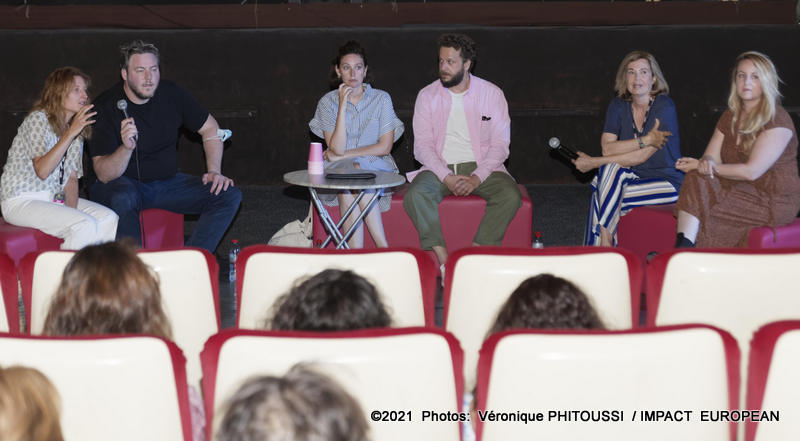 A Round Table on the Profession of Actor was held on Friday July 2 at the Cinema " Le Como é dia " in Sète as part of the Sunsè te Festival.

“ Should we choose between series and feature film ? ”

A Round Table on the Profession of Actor was held on Friday July 2 at the Cinema ” Le Como é dia ” in Sète as part of the Sunsè te Festival.

Igor Gotesman, Director, Screenwriter, Artist , performer , producer of “ Five ” , “ Family B usiness ” , Actor in “ Five ” , “ My Unknown… ; Olivier Rosemberg, Performer, Author and Director in “ Les immatures ”, “ Mon Vieux ”, “ Family B usiness ”… ; Louise Coldefy, performer in the new French Netflix series of Family Business produced by Igor Gotesman ; J ulia Paiton , actress in “ Family Business ” , “ The Mystery of Henri Pick ” , “What have we done to the Good Lord … ; Catherine Alric, actress in ” Tendre Poulet ” , ” We stole Jupiter’s thigh ” , ” Le Mensonge ” spoke of their experiences as an actor in cinematographic formats, series, feature films. Everyone gets satisfaction, a certain adrenaline, a different motivation and the desire to surpass themselves for some.

Various questions were addressed by Stéphanie Chermont, journalist during this round table. The public could interact with the guest (s) , date , the Cinema Como é dia in Sète.

Here is a sampling of the many questions abo r being supplied s during this e c hange good child, very friendly and rewarding.

The actor he feels more the proximity to the public when it played in a series? An affect is created t it ?

For some, it is obvious that the proximity of the small screen creates a privileged link and a certain complicity to be found over the seasons .

What BC has ntages and cons of shooting a series? What are the differences in budget , cachet, operation, is the stress the same ?

Igor Gotesman feels no difference to the format, it works the same way and sat isfait by the rhythm of the series, rhythm that gives him the opportunity to create characters, twists within a story of ‘a series .

As for the shooting, it only lasts 20 to 30 days for the most part, and the directors have less financial means than before, the actors play only a few scenes or a few days while the series stretches in time over time. seasons and twists and turns. A character can disappear from an episode of a series when this is hardly possible in a film shoot.

The differences in budgets are real, with the same amount directors make a lot more series and seasons in a series than during the shooting of a film. The series also have an advantage, they cost less to manufacture, are visible over public through Netflix and other channels and are also broadcast worldwide on the flat-shaped s digital s where success.

The cinema is in crisis for several years , the Covid and the change s mentality , consumption, the speed with which the audience can see the series on the pasta-shape has hardly helped ” Cinema ” .

On the other hand, a fear existed concerning the young people but the digital platforms did not divert them.

For Louise Coldefy , a series shoot pushes her to be better, to surpass herself and therefore she feels good stress. Which leads him to go further in his game.

Julia Paiton , daughter of Charlotte de Turck h eim, pointed out that the shooting of a film sometimes had downtimes, that the shooting was long with several takes ; That a certain weariness at the end of the day or of filming was occurring .

C ontrarily , filming a series pushes her to her limits and prevents her from thinking too much and giving the best of herself without being overwhelmed by bad stress.

How are the financial negotiations going after a successful role in a first series with such exceptional enthusiasm ?

In the past, it happened that players demand more money because they had a great success in a season and it s monnayaient their success to the next e season. Following these episodes, the directors and producers decided on an identical fee for all seasons in order to avoid this kind of inconvenience in the future. Everything is set from the start.

Isn’t it difficult to detach yourself from the character when you are an actor and you play in a successful series? (Peter Falk with Colombo) .

Opinions differ depending on the period and the artist.

Isn’t there a fear in doing a series too many ? Or to remain cataloged with the public in a caste ?

The actresses and comedians present today were not concerned by concern until now but they stated the films shot ” too much “.

What is it that makes actors manage to vary their characters without disturbing the public? ( Jean Dujardin, with “a guy a girl” and then in “The Brice Man” and many other long – film s successful) , Alexandra Lamy and many others … .

For Jean Dujardin, they explained that the actor had created the character, as for Peter Falk, very few audiences know him in roles other than in Colombo.

You have to be an informed cinephile to find out.

I sincerely believe that actresses are more categorized into castes than men and this is different with the new generations of ” actors “.

What are the filming differences between a series and a movie ?

In a series, the rhythm is hectic , the actors and actresses play more scenes, create a link over the seasons. They are like a small family.

If you had to choose between playing only in series or only movies?

The guests present liked to play in both formats.