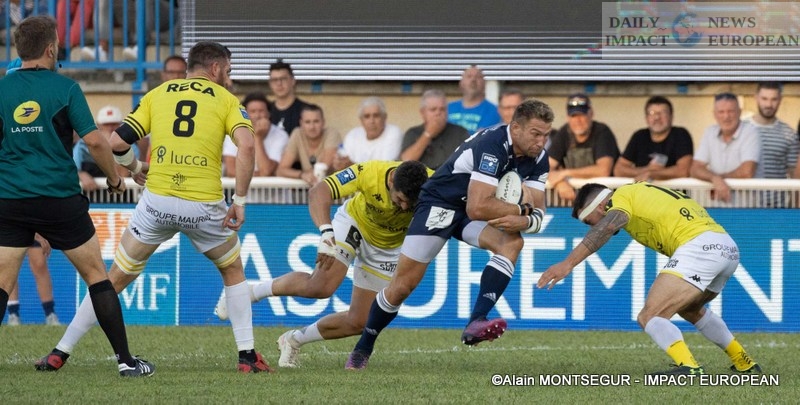 The first shock of the season saw the Aude lose 24 to 6 against Colomiers.

After tasting the final stages last season, US Carcassonne returned to the campaign this Friday August 26 for the 2022-2023 season. The first shock of the season saw the Aude lose 24 to 6 against Colomiers.

US Carcassonne is starting the 2022/2023 season on US Colomiers’ lawn at Stade Marcel-Bendichou, but unfortunately some players were unable to apply for a place in the group.

It was only at the end of the first period (37th) that Colomiers made the difference with a try from his winger Valentin Saurs when the 2 teams were 6-6. on the dismissal, a foul on Romuald Séguy allowed Thomas Girard to bring the score to 14-6.

A story of scorers between Thomas Girard and Baptiste Mouchous for a 6-6 (24th). Carcassonne after the yellow card of columérin Anthony Coletta dominates, but Romain Manchia cannot flatten in the in-goal. Then against, the club of the dove benefits from a scrum on the 22m Aude. The ball goes out for Ugo Séguela who sends his winger Valentin Saurs behind the line (11-6, 37′). On dismissal, Thomas Girard brings the score to 14-6 for a foul on Romuald Séguy. on returning from the locker room, it was a penalty try for Colomiers (24-6) which sealed the last hopes of Carcassonne, who found themselves at 13! Despite a burst of pride from the Audois, the score did not move much to the dismay of Colomiers who did not recover the offensive bonus.

But certain technical errors do not allow the men of Julien Sarraute to conclude these actions. Prop Beka Sheklashvili will also receive a yellow card for a scrum. The score will not move and Colomiers Rugby will have a last dangerous action with a game at the foot of Valentin Saurs. But the opponents recover the ball and commit a forward. The referee whistles the end of this match. The Columérins start with a very good victory at the Michel-Bendichou stadium against a team contender for the final stages. Two tries scored and four successful penalties allow them to leave with the four points. La Colombe ranks second in ProD2 after this first day.