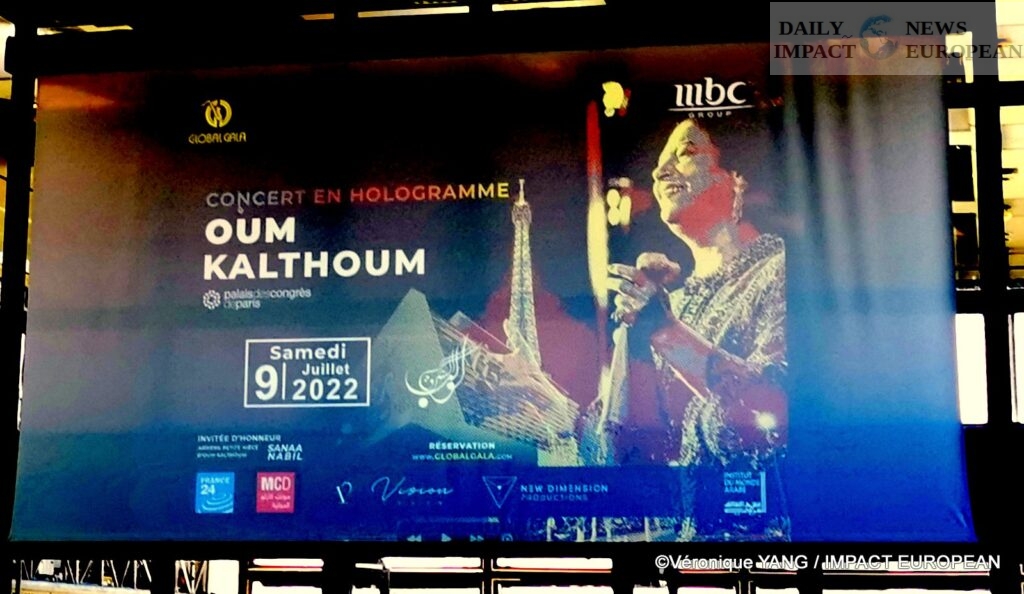 On Saturday July 9, the Global Gala group, led by Mohamed Gad for more than 30 years, will present Oum Kalthoum's Hologram concert at the Palais des Congrès in Paris (75017).

On Saturday July 9, the Global Gala group, led by Mohamed Gad for more than 30 years, will present Oum Kalthoum’s Hologram concert at the Palais des Congrès in Paris (75017).

In order to present this event, the group, under the direction of Fatima Guemiah, organized a press conference on May 14, at the Institut du Monde Arabe in Paris (75005). It was an opportunity to bring together the journalist Ysabel Saïah-Baudis, author of “Oum Kalthoum, the star of the Orient”; the Franco-Egyptian journalist Ahmed Youssef and the director of Global Gala, Mohamed Hussein Gad.

Ysabel Saïah-Baudis, as an author, has published works concerning important personalities of the Arab world, highlighting oriental authors. In 1985, she published the biography of the Egyptian diva and icon Oum Kalthoum. In another work, in 1988, she spoke of the origins of her mother Pied-Noir in “Pieds-Noirs et proud de l’être”. She then published “Haram”, the itinerary of oriental women, in 2003, then “Les 1001 érotriques nights”, illustrated by Van Dongen in 2008. Her last work “Dans ses yeux”, with photos by Dominique Baudis, commented by friends, date of 2015.

Ahmed Youssef has developed an international reputation thanks to his writings on Franco-Egyptian political and cultural relations. His texts are translated into several languages ​​including Arabic. He also collaborated in the writing of the collective work “What remains of pan-Arabism?” by a study on Oum Kalthoum and Nasser. His latest book is “Captain Bouchard, this stranger who discovered the Rosetta stone”.

After the 2 concerts of the icon of Arab song in 1967, Oum Kalthoum is back on the stage of the Palais des Congrès in Paris, on July 9th. “The star of the Orient” returns, not physically but in hologram for the greatest pleasure of the unconditional music lovers of the deceased singer.

From the beginning of the concert, we will see the recreated silhouette of the singer appear on stage. Materialized in 3 dimensions, dressed in a golden dress and wearing her usual bun, she will hold her famous scarf in her hand, while making her unique voice resound.

Guest of honor for the evening will be the great-grandniece of the singer, Saana Nabil. Just like her aunt, she is a talented singer. Since the age of 9, her father noticed her talent for singing and music. He decides to bring her to Cairo and registers her at the Higher Institute of Arab Music, when she is 15 years old. At the same time, she participated in the television show “Arabs Got Talents” where she obtained the “golden buzzer”, awarded by actor Ahmed Helmy. Since then, she has participated in many concerts and international events including the “Hologram Concert at the Dubai Opera, the al Ula festival in Saudi Arabia or the concert at the Abdine Palace in Cairo.

Mostafa Fahmy and The Crossed Ropes

“The Crossed Strings Orchestra”, under the baton of artistic director Mostafa Fahmy, will accompany the hologram of the diva. This orchestra is the result of a partnership between its founder, Maestro Mostafa Fahmy with a group of musicians from Egypt and France. “Les Cordes Croisées” gave its first concerts in France in cooperation with the National Center for French Song in Paris in 2019. It accompanied the Egyptian mezzo-soprano opera singer Farrah El Dibany from the Paris Opera. Artistic workshops also worked with the orchestra and students from the Ecole Supérieure du Chant et de Théâtre de Paris, as part of the Franco-Egyptian cultural year.

Mostafa Fahmy is an internationally renowned conductor. A graduate of the Conservatory of the Higher Institute of Music in Cairo, he obtained his art license in 2009 and began his career in Cairo. Violinist and former member of the Cairo Opera Orchestra, he takes part in tours in Egypt and internationally as a musician but also musical director. To date, he has performed at the Center national de la Chanson Française, at the IMA in Paris, at the Opéra Bastille, at the Opéra du Caire, at the Zamalek Theater at the Abu Dhabi Classical Music Festival, at the Mediterranean Music Festival in Corsica, More recently, he participated in the artistic comedy Oum Kalthoum, the golden age of the Dubai Opera. Since 2011, he has been a pedagogical referent at the Conservatoire d’Angers, within the Orchester Démos project in collaboration with the Philharmonie de Paris.