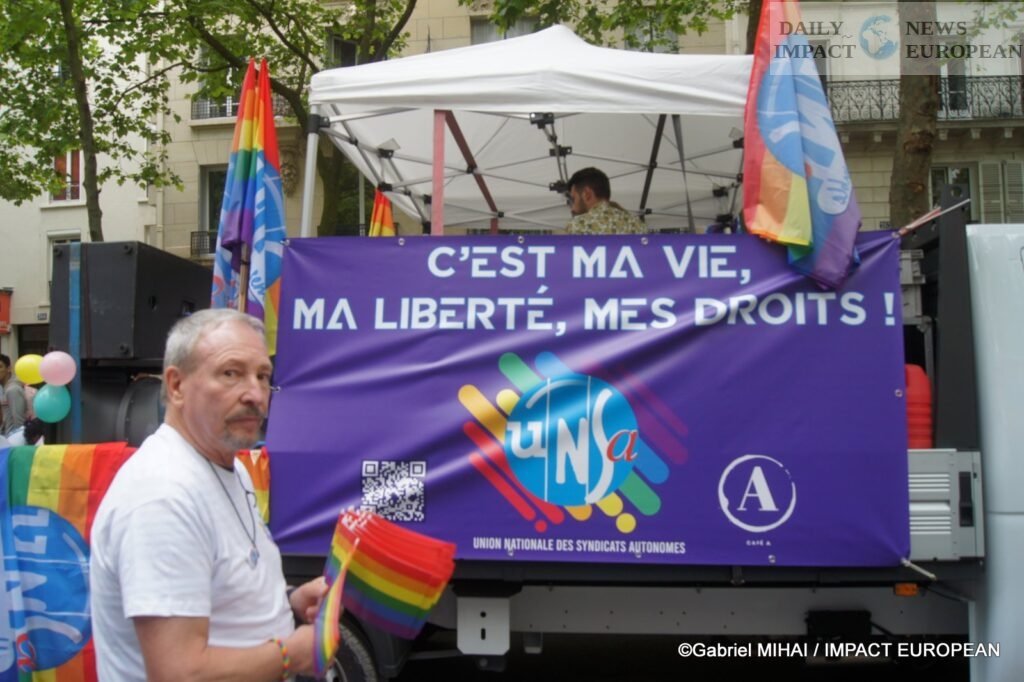 Since its importation into France in 1977, these people have come together to defend the rights of LGBTQ+ people and demand equality for all.

This event welcomes half a million people from Ile-de-France, the provinces and even from abroad during each edition. Since its importation into France in 1977, these people have come together to defend the rights of LGBTQ+ people and demand equality for all.

The shy rain did not dampen the hearts and colors of the Pride March, which brought together tens of thousands of people. A procession so long that it extended without forcing half of the 5 kilometers of the route, from the east of the capital, Porte Dorée-Michel Bizot. They arrived two hours later at République after passing through Bastille. In this multicolored cocktail, we encountered the concerns and demands of the LGBTQI+ communities, but also a great need to meet up and have fun.

The Grand Podium, on the Place de la République at 5 p.m.

Artists, DJs and associations have come together with the aim of raising participants’ awareness of the fight against discrimination and preventing sexual health.

The stage hosted a concert by Bilal Hassani, representing France at the Eurovision Song Contest 2019. Two years ago, the then 17-year-old singer publicly announced his coming out the day before the Pride March. in Paris by broadcasting his piano ballad Hold your hand on YouTube. The committed singer has since become the icon of the Millennials.

The float of the town hall of Paris is the symbol of an inclusiveness acquired through struggles and proactive public policies. 400,000 euros of the city’s budget are devoted to the fight against LGBT discrimination, “plus the associations that we finance directly, or the six apartments for LGBT refugee victims in their community”, adds Jean-Luc Romero.

The rain didn’t deter anyone. Trans, drags, LGBT refugees, gay and lesbian couples but also many heterosexual couples dancing to the thundering rhythms that escape from the sound system.

On the night of Friday to Saturday June 25, a shooting occurred in the center of the Norwegian capital, Oslo. It caused two deaths and at least 21 injuries, including 10 seriously but whose vital prognosis is no longer engaged. A suspect was arrested after the salvo of gunfire which occurred around 1 a.m., in front of two bars, including a gay one, in the heart of Oslo. The Pride, scheduled for Saturday June 25, has been canceled as a precaution and in memory of the victims.

In Paris during the march, a minute of silence and tribute was celebrated in memory of the victims of Oslo, but also for those who died of AIDS as every year during the parade.

On Saturday we also marched in Montpellier and Biarritz. Next week, prides are taking place in Marseille, Quimper, Dax and Toulouse.