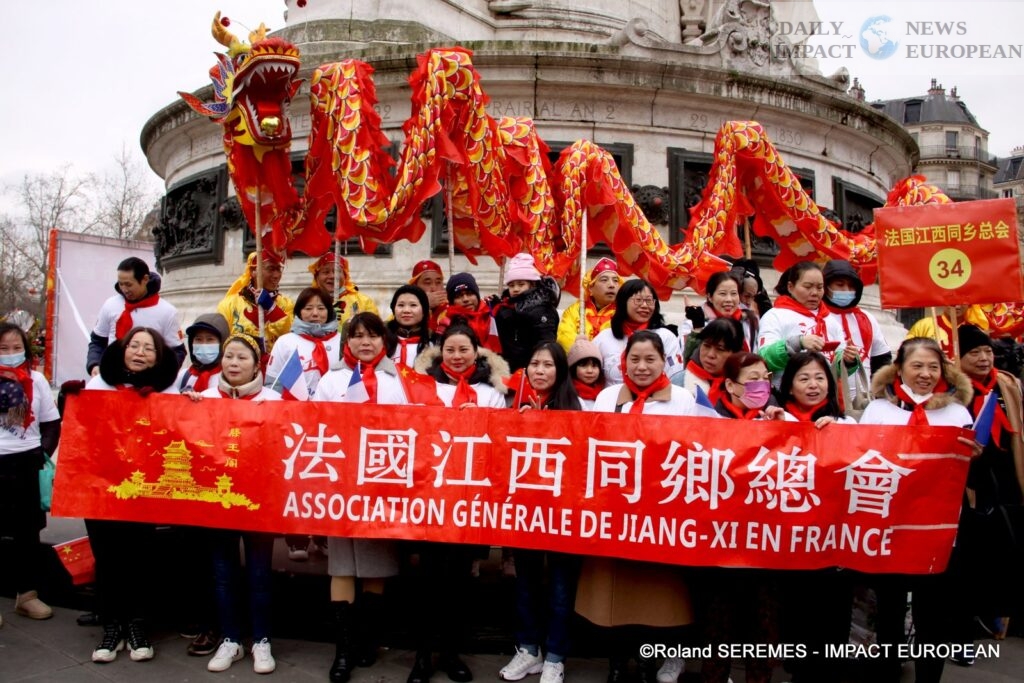 After 2 years of absence following the Covid-19 pandemic, the Parisian Chinese New Year parades are back this year, to the delight of young and old alike.

To keep the happy new year in China, you have to say “Xin nian kwài lé”, (.新年快乐), crack firecrackers and wear red according to tradition.

After 2 years of absence following the Covid-19 pandemic, the Parisian Chinese New Year parades are back this year, to the delight of young and old alike.

The 12 signs, represented by animals are: Rat (or Mouse), Ox (or Ox), Tiger, Cat (or Rabbit or Hare), Dragon, Snake, Horse, Goat (or Goat or Sheep), Monkey, Rooster, Dog, Pig (or Boar). The first day of the lunar year is called, “Yuan dan”, it generally falls between January 21 and February 20.

After the Metal Rat, the Metal Ox and the Water Tiger, the new year will be placed under the sign of the Water Rabbit, synonymous with silence, elegance, kindness and responsibility, unlike last year marked by unforeseen changes, surprising developments but also tensions and rebellions. The Water Rabbit will return in 60 years, i.e. in 2083.

Who says Chinese New Year, says colorful traditional popular parade, dragon and lion dance to the sound of drums and cymbals. In Paris and in the metropolises, the Asian community meets to parade in the streets. In the capital, there are no less than 4 major parades, the largest of which is located in the 13th arrondissement, but it is the one in the Marais district which opens the dance between Place de la République and the Hôtel de Ville. .

This Chinatown in Paris is the oldest. It mainly brings together residents of the community of Wenzhou, Chekiang province in southeastern China. The parade crossed the streets decked out with lanterns and posters after speeches by the mayor of Paris Center, Ariel Veil, representative of the PRC Embassy in Paris and representatives of associations. Dragons, lions, dancers, martial arts paraded in a good atmosphere to the sound of drums and cymbals in front of an enchanted public despite the cold. The parade was organized by the Festival Committee and the Paris Center 75003 town hall, which organizes an annual Chinese cultural week. (conferences, exhibitions, concerts, dragon dance parade, and martial arts demonstrations.

The festivities began on January 21 with the decoration of neighborhood streets (lanterns and posters). In Paris’s Chinatown, the inauguration took place on avenue d’Ivry from 3 p.m., the kick-off of the festivities took place at 5 p.m., village hall of the 13th arrondissement town hall in the presence of the mayor, Jérôme Coumet and numerous associations. neighborhood. The parade, which has been around for nearly 20 years, will be held between Avenue de Choisy and Avenue d’Ivry on January 29. Other activities and shows are to be discovered at the town hall during the week:

Chinatown in eastern Paris celebrates the Year of the Water Rabbit by organizing a food market on January 26 from 6 p.m. to 10:30 p.m. as well as a parade on January 28 from 56 rue de Belleville from 2 p.m. Dragons, lions, firecrackers, calligraphy demonstrations and musical atmosphere will be on the agenda. Lions will visit merchants and eat salad to bring good luck and prosperity.

The parade in the 8th arrondissement of Paris is the most recent. It takes place rue du faubourg St Honoré. Organized by the Fg St Honoré Committee, it invited the public from the corner of rue Boissy d’Anglas to rue Royale, between 2 p.m. and 4:30 p.m. on Monday 23 January. To do this, around thirty artists from the Paris Lion Sport club paraded in shimmering costumes to the rhythm of the percussion Lions and dragons, bearers of luck and wealth, were there to help people discover Chinese culture and traditions. A real feast for the eyes!