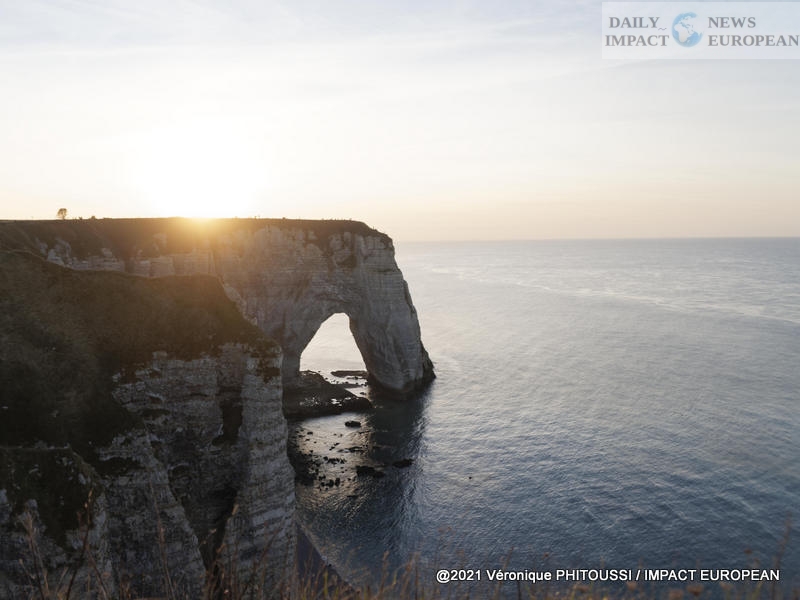 Étretat was in the past a small fishing village but in the 19th century. Étretat has become a seaside resort. This town is located 25 km north of Le Havre on the Channel coast, on the Alabaster Coast in the Pays de Caux.

Étretat was in the past a small fishing village but in the 19th century. Étretat has become a seaside resort. This town is located 25 km north of Le Havre on the Channel coast, on the Alabaster Coast in the Pays de Caux.

Étretat is characterized by its white chalk cliffs and gray pebble beaches. It is forbidden to take these grayish pebbles. Étretat presents its three successive arches: the Porte d’Amont, the Porte d’Aval and the Manneporte. It is the action of an underground river parallel to the beach which would have dug its bed in the Cliffs and these three Arches.

Another river would have created a second set of arches but they have completely disappeared.

The cliffs are made up of limestone with strata of flint. With rainwater seeping into the porous chalk and with frost; The sections of cliffs are weakening and collapsing. At the foot of the cliffs, the visitor can see the presence of scree. Limestone and flint mix and the action of the ocean polishes the flint to make pebbles. Notches of undermining dug by the sea can be seen at the foot of the cliffs. Erosion also takes place through the English Channel.

This city has attracted in the past painters such as Gustave Courbet, Claude Monet … Writers such as Maupassant, Gustave Flaubert often came in their time.

The famous novelist Maurice Leblanc, author of “Arsène Lupin” made Étretat known in one of his stories entitled “The Hollow Needle”.

Étretat is a rural commune with specific urban planning provisions for the region. The preservation of natural areas and ecological balance are the priorities of the region. It is not possible to build along the edges of the beach.

In the British and American cemetery, 564 graves are unfortunately there to bear witness to the horror of war.

The Germans will destroy the Casino, the villas in order to reinforce their defense of the site in the event of landing. The occupying forces looted and destroyed the villas and they rested quietly in this town thanks to the 51st division of the Highlanders on the day of the liberation, in September 1944. The facade was rebuilt with a lot of concrete.

With paid holidays, the city has suffered from mass tourism and writers, artists and politicians have deserted the city to turn to other horizons for their holidays.

Sinners have stopped working since the 90s.

The lower town is below sea level at high tide. Étretat was built in the Grand Val estuary in the 19th century. In the 2000s, the “Le Perrey” dyke-promenade was consolidated. The pipes have been renovated since 2005. As a result, the city is no longer in danger as in the past where it has suffered floods and mudslides more than 8 times.

Étretat is a pretty town with a cultural and geographical heritage to be visited again and again at all hours. The lights are different every time. It is also a part of our history that will never be forgotten.