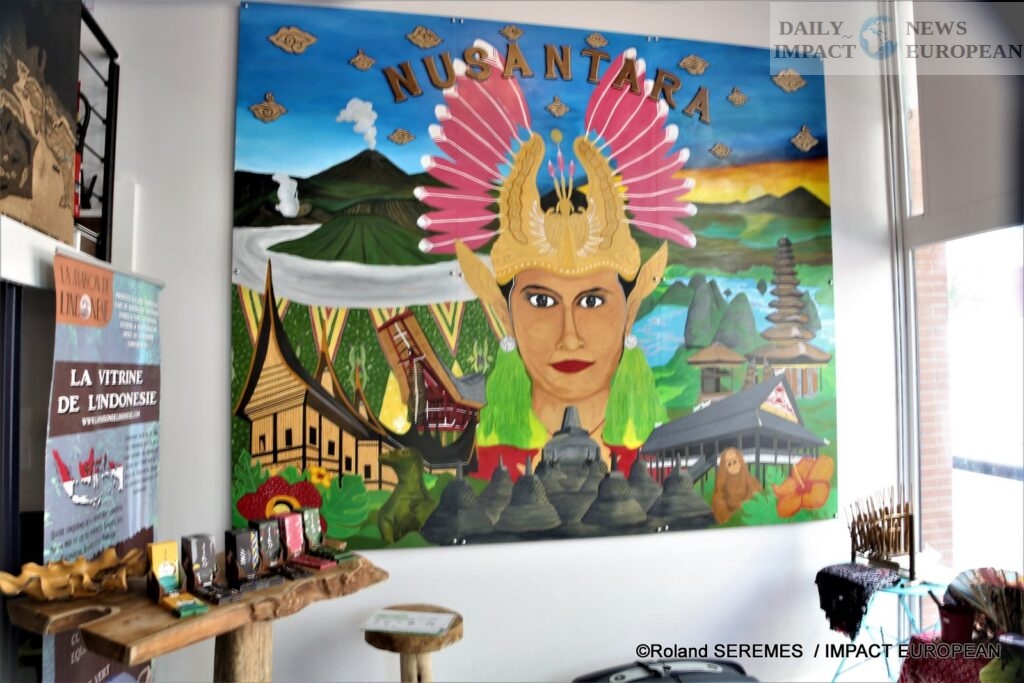 The House of Indonesia, located in the 14th arrondissement, presented a cultural weekend in Paris on July 22 and 23.

The House of Indonesia, located in the 14th arrondissement presented a cultural weekend in Paris on July 23 and 24.

On this occasion, several activities were organized: Chocolate workshop, Batik workshop by the resident of New Caledonia of Indonesian origin Laura Rossmark, Indonesian painting workshop Soekarno and Kartini by the Franco-Vietnamese artist Raphael Verdon, street food with tastings . This place is also a store where you can find Indonesian products such as coffee, tea, spices or chocolate, groceries, beauty products (essential oils and aromatherapy), well-being and travel proposals. … A concert of electronic percussion music with background gamelan music by an Indonesian artist, Darman Merdeka, closed each day.

History of the House of Indonesia

In 2016, Eka Moncarré, French of Indonesian origin, decided to create the Indonesia Tourist Office in the 5th arrondissement of Paris. As director, she offers to discover the beauties of the archipelago with 17,000 islands.

Born in Jakarta, she arrived in Paris to continue her studies and then settle professionally. Appointed by the Ministry of Tourism to be an ambassador between France and her country, she facilitates the relationship between the 2 countries while encouraging the French to visit Indonesia. After the closure during the pandemic, only the promotion of the products made it possible to promote the country.

After its permanent closure in the 5th arrondissement, the Indonesian Tourist Office has been established since May 2022, near Montparnasse, rue Jean Zay, still on the initiative of Eka Moncarré. The place has been entirely decorated by Indonesian artists. It is both a café that allows you to enjoy an iced coffee made from coconut sugar, or jamu, a drink made from medicinal plants, but also a shop that presents handicrafts.

Tourist office, the house of Indonesia allows you to prepare your trip to Indonesia thanks to documentation, videos and the list of the latest travel formalities. Indeed, since May 18, 2022, the country no longer requires vaccinated travelers from abroad to present a negative Covid-19 test upon entering the country. Wearing a mask remains obligatory indoors and in transport.

Batik is a traditional textile that exists in different parts of the world, India, China, Southeast Asia, Turkestan and West Africa. The most refined is that of the island of Java in Indonesia, where it is found in ceremonies, rituals, clothing or puppet theater… It is also listed as an intangible heritage by UNESCO. since 2009.

Passed down from generation to generation in Java and elsewhere, Indonesian batik is made by applying hot wax to fabric (silk or cotton), in dots or lines, using a stylus-shaped copper instrument called canting or copper pads named cap. The wax makes it possible to resist the natural or synthetic dyeing process carried out by hand. The fabric is then boiled and/or scraped to remove the wax. The process is repeated for each shade.

Origin of batik in Indonesia

There are 2 opposing schools of batik. One of Indian influence between the 6th and 7th century and the other based on the communities of Flores or the Toraja region in Sulawesi which would have developed their own textile without Hindu influence. From the 19th century, production increases and the north coast of Java develops the industry, while introducing the European style linked to the Dutch colonists.

The motives are related to the local community, social status, nature, history, cultural heritage and circumstances (pregnancy, marriage, baby, death…). To make a batik, artisans fast, pray and work while meditating to the sound of traditional songs. It takes several days to make a batik with a stamp and a month at least up to a year for a piece where the drawings are drawn by hand.

There are 2 main styles of batik in Java, that of the old royal cities in the center since the 16th century and that of the north coast, influenced by the Chinese with bright colors, flowers or birds. This is what is called pasisir batiks from the 19th century.
In the center, the designs are of local origin and then evolved with the spread of Islam.
Outside of Java, batiks of Indian and Javanese influence can be found in Palembang and Jambi on the island of Sumatra.

After studying in Paris, Ravenna (Italy), Bourges and Hanoi (Vietnam), he obtained diplomas in applied arts and crafts (Paul Poiret School in Fashion Design, Boulle School in Tapestry-Decoration and Ensaama-Olivier de Serres in Fresco and Mosaic) and Saint Charles Center – University of Paris I Panthéon Sorbonne (Bachelor and Master 1 in Plastic Arts and Art Sciences).

At the ENSA in Bourges, he worked on sound creation and Chinese lacquer techniques with Tang Ying. In 2014, during the France-Vietnam year, he studied sanded lacquer painting, traditional Vietnamese painting during an internship in Paris, and participated in the collective exhibition at the École Pratique des Hautes Études, in September.

To perfect his skills in sanded lacquer painting, he moved to Hanoi for 2 months on Erasmus for an internship. He then set up his exhibition: Phát, Lôc, Phúc, within the Trường Đại học Mỹ thuật Công nghiệp University itself. Raphaël Verdon wants to be a disciple of the great artists who trained and inspired him. In September 2017, he entered Inalco, Langues’Ô, to study the language and civilizations of Southeast Asia. He set up an exhibition there in February 2019, on the occasion of the Tet holiday of the Vietnamese studies section. The same year, he embarked on the study of the Vietnamese zither.

Raphaël Verdon works in sound creation, he is also a fresco artist and a mosaic artist. Visual artist, he also works with other materials and stencils.