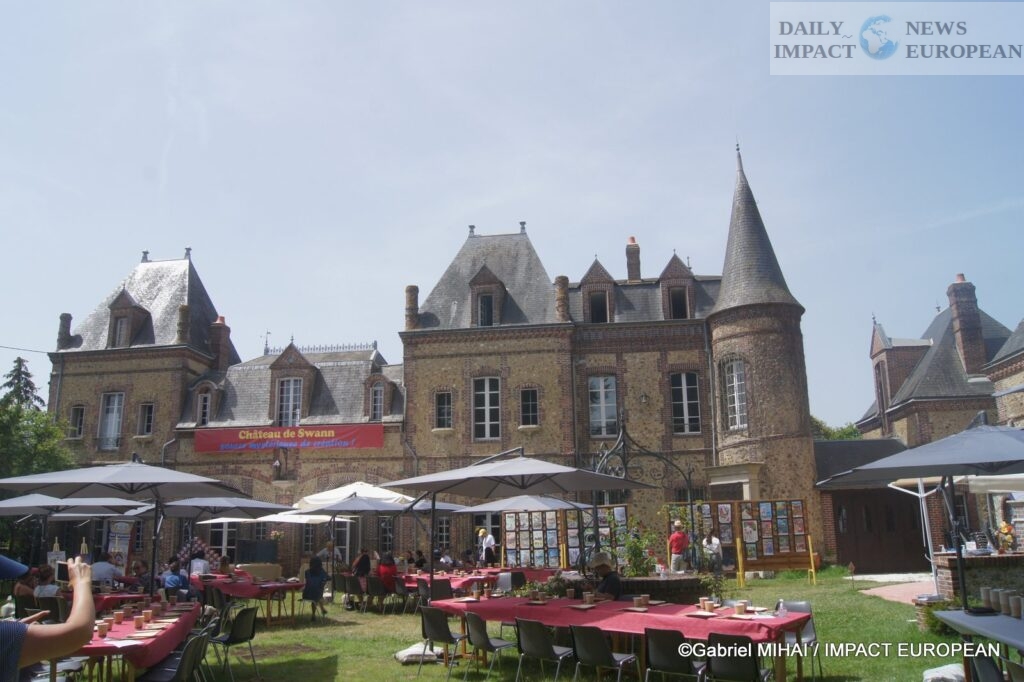 The sun shone in Illers-Combray (28) for the auction of drawings by children who took part in the Artistic Games, and 20 paper prints from the "Around the Château de Swann" collection, produced by l visual artist David Feruch.

The sun shone in Illers-Combray (28) for the auction of drawings by children who took part in the Artistic Games, and 20 paper prints from the “Around the Château de Swann” collection, produced by l visual artist David Feruch.

This event under the leadership of auctioneer Jack-Philippe Ruellan took place on June 18, during the garden party organized at the Château de Swann, property of the businessman and writer Ya Ding, author of the book, “Le Red sorghum”. It followed the opening on June 4 at the Carrousel du Louvre, inaugurated by the Chinese ambassador to France, Lu Sha Ye.

The works of children from China and the rest of the world have been made from voluntarily unfinished works by 5 recognized French artists and their inspirations: Sophie Sainrapt and the red chapel, Augusto Foldi and the mysteries of Marcel Proust, Emmanuelle Renard and the castle seen from inside and outside, Christophe Ronel “A la recherche du temps perdu” and Malgorazta Pascko. “On the Swann side”. The Château de la Sinetterie is the place where Marcel Proust experienced his first emotions in his youth.

The auction, carried out in partnership with UNESCO, began around 11 a.m., on the internet and on site where many guests had come to bid higher during this garden party. On the internet, you had to connect live to place your order on the platforms (interencheres.com, drouot.com or epailive.com). The co-creations of the children were estimated from 150 euros, the most important at 500 euros. David Feruch’s paper prints started at 2,500 euros. The range for all sales was between 300 euros for the cheapest and 4,500 euros for the most expensive, including paper prints. Regarding these, the sale of each of the 20 works presented was accompanied by its NFT token (Non Fungible Token or Non Fungible Jeton). It is valued data consisting of a type of cryptographic token that represents an object. The NFT token is often presented as a title deed.

The auction and garden party were hosted by harpist Bo Shrem and violinist Alexandre Dray.

In 1850, Germain Vallerand, a former civil servant, built a castle, La Sinetterie, on the Illiers-Combray estate (28). Napoleon III style, it is surrounded by a forest park, with a Calvary and a chapel, the chapel of St Pierre.

Located not far from Chartres, a hundred meters from Aunt Léonie’s house, it saw Marcel Proust grow up and inspired his first novel by becoming Charles Swann’s house in his work “In Search of Lost Time”.

The Germain Vallerand and Proust families knew each other. After his divorce from his second wife, Louise Pinson, Germain Vallerand turned to religion and built the chapel of St Pierre where he was buried in 1873. After 10 years of legal battles, the castle was sold to Louis Fénelon Drache by the intermediary of Adrien Proust. Following his death, his daughter Elvire acquired the estate and sold it to his son Lucien Lelièvre. She had the park laid out there and built a Far Eastern garden with a pond and a Chinese-style pavilion.

While the Maison de Tante Léonie has been open to the public for several decades to discover the writer’s bedroom or the famous “Madeleine”, the Château de la Sinetterie shows another image of the writer’s youth. by spending his early years with Lucien Lelièvre, whom Marcel Proust found his inspiration.This is how Lucien became Gilberte, daughter of the couple Charles Swann and Odette.

Private residence bought by the Chinese writer and businessman Ya Ding, it was transformed after nearly 2 years of work and renamed “Château de chez Swann”. The layout is linked to the imagination of the owner and to the historical and artistic interpretation of Jean-Yves Patte. Museographer and responsible for scenography, he explains his interpretation according to which, the castle could have been the residence of Proust in Illiers-Combray. The furniture was found in flea markets.

The estate was inaugurated in 2021, during the European Heritage Days and was visited by the Macron couple. For the visit, a free route or guided by audio book in certain rooms of the castle, is followed by a walk in the park, discovering several stages including the chapel repainted in red and the Calvary.

From 2022, it has become a place of inspiration and stay for artists, while offering events and temporary exhibitions.