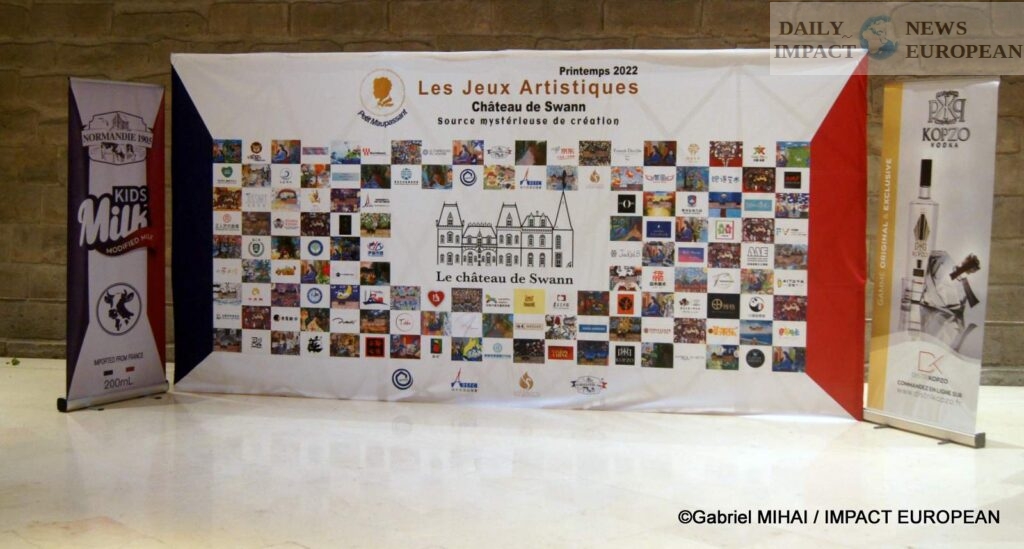 The opening of the Artistic Games took place on Saturday June 4 at the Carrousel du Louvre in the presence of many guests. A memorable evening in honor of the more than 500 children who completed the works of 5 French artists known in the trade.

The opening of the Artistic Games took place on Saturday June 4 at the Carrousel du Louvre in the presence of many guests. A memorable evening in honor of the more than 500 children who completed the works of 5 French artists known in the trade.

Inaugurated by Chinese Ambassador to France Lu Sha Ye, this artistic event initiated by Ya Ding, author of the book “Red Sorghum”, was a cultural link between France and China. It has also made it possible to bring together art, fashion, music and gastronomy around the drawings made by Chinese children and from all over the world.

Hervé Pouchol presented the evening hosted by Yann Crépin on the piano, Boh Shrem on the harp, Alexandre Dray on the violin, the Bondy children’s choir and the singers Elodie Siby, Marl’n and Ophélia who took up a title by Fabienne Thibaut for the occasion. The latter presented some models of its line of clothing for strong women.

Designer Angela Shapovalova has unveiled ten dresses from her collection. Each model presented a child’s work.

Among the guests, we recognized Sophie Darel, Any d’Avray, the Haitian singer Francky -Lover Morcy, “The girl with the harp” Marie Nicot, the cellist Adrien Frasse-Sombet, the actress Catherine Lachens, the stylist Anggy Haïf, Colombian-born painter Miguel Prieto Verastegui and many more.

This was the opportunity to announce the auction hosted by Maître Jack-Philippe Ruellan. It will take place at the Château de Swann in Illiers-Combray (28), on June 18 and will be broadcast live in France and China, just like the June 4 event.
Each work will be accompanied by its NFT (non-fungible token, i.e. valued data composed of a type of cryptographic token which represents an object to which a digital identity is attached.)
The money raised will be used to build a retirement home for Normandy cows who produce “Normandy 1905” milk (adults, children over 3 years old and over 4 years old).

A garden party will take place on June 18 from 11 a.m. to 6 p.m. to rediscover the works exhibited at the Carrousel du Louvre on June 4 and follow the auction, broadcast live.

To consult the list of works offered and the conditions of sale and payment, follow the link:
https://www.interencheres.com/meubles-objets-art/les-jeux-artistiques-du-chateau-de-swann-310139/?page=5

To add to the sale of the more than 300 drawings in co-creation with the children and the 20 works of photographer David Feruch, accompanied by their NFT offered, there are 3 possibilities:

1. Leave a purchase order on the site or a telephone order
2. Connect live on all platforms: interencheres.com, drouot.com, epailive.com
3. Come on June 18 to the garden party at the Château de Swann (6 rue Saint Pierre 28120 Illiers-Combray).

The June 4 launch was accompanied by a “Discoveries” buffet to familiarize the public with new dishes and alcohols.

*The caterer Orza had come with his Spanish ham, cut in front of the guests.
* Kopzo vodka, presented in its bottle in the shape of a red, pink or white diamond. This Polish vodka is distilled 6 times, filtered 7 times and made according to a traditional recipe from high quality products. It can be consumed pure or in the form of a cocktail.
*Baijin, the most consumed Chinese spirit in the world, present in all regions of China. Made using ancestral techniques over 2000 years old, it comes from the fermentation and distillation of sorghum and offers 4 main flavors: Light, Intense, Rice and Sauce. The history of the oldest brand of Baijiu began during the Ming Dynasty (1368-1644) Its manufacture has been passed down for 24 generations by the masters of spirits. The distillery is located in the southeast of Sichuan province, the “Golden Triangle of Baijiu” and draws its purity from the water of the Tibetan mountains. The 1573 cellar is classified as a national treasure, it is considered a historical relic, it has been brewing for 440 years.

There are 3 flagship products:

*Guojiao 1573, fermented in its historic cellar. It offers fruity flavors of honey, rosin and roasted pineapple blossom.
*Zisha Daqu, in her clay bottle that allows her to breathe. It reveals aromas of toasted sesame, fermented soybeans and a flavor of dark chocolate, sour cherries and nuts.
*Luzhou Laojiao Tequ, soft, full-bodied and refreshing, it offers an aroma of honey, licorice and tropical flavor of papaya and ripe mango.

*Meijian, Chinese plum wine, is the perfect combination of sorghum alcohol and green, sweet, juicy and tangy plums from Puning in the Canton region. Drink with 12% alcohol content, this drink is light and refreshing. It can be consumed plain, on ice or in a cocktail, but also to accompany any meal. During parties, the company presented a magnificent ice sculpture, taking the shape of the bottle.

Back to Artistic Games

Artistic project imagined by the author and businessman of Chinese origin, Ya Ding, the Artistic Games were born from the association of the renovated domain of the Château de Swann in Illiers-Combray (28), which he owns, and the creativity of children having to complete a work by one of the 5 French artists, which they have chosen. These artists are:

– Sophie Sainrapt, very inspired by the red chapel;
– Augusto Foldi, his character as a woman in profile, guards the mysteries of Proust;
– Emmanuelle Renard, her work is a mixture of the interior and exterior of the castle, but also of the park and the red chapel;
– Christophe Ronel, he gives detail a special role in painting, each element refers to “the search for lost time;
– Malgorazta Paszko, she used the first pages of the book “Swann’s side to make the facade of the castle).

After receiving the works, a jury made up of personalities from the artistic and literary world will award an artistic score and a technical score to the selected works. The award ceremony, the Swanns, will take place in July at the château. The 20 best will participate in the Swann Trophies. In addition, all participants in the J.A. will receive a medal and a diploma (Swann Talent certificate).

A second jury, made up of doctors, lawyers, journalists, engineers or any other non-artistic environment, will make another selection, called “Best Consideration” will make a selection according to a chosen theme (dreaming, enthusiasm, vivacity, turbulence, melancholy or extravagance…)

The Artistic Games are extended internationally thanks to the partnership with WFUCA (World Federation of UNESCO Club, Centers and Associations).