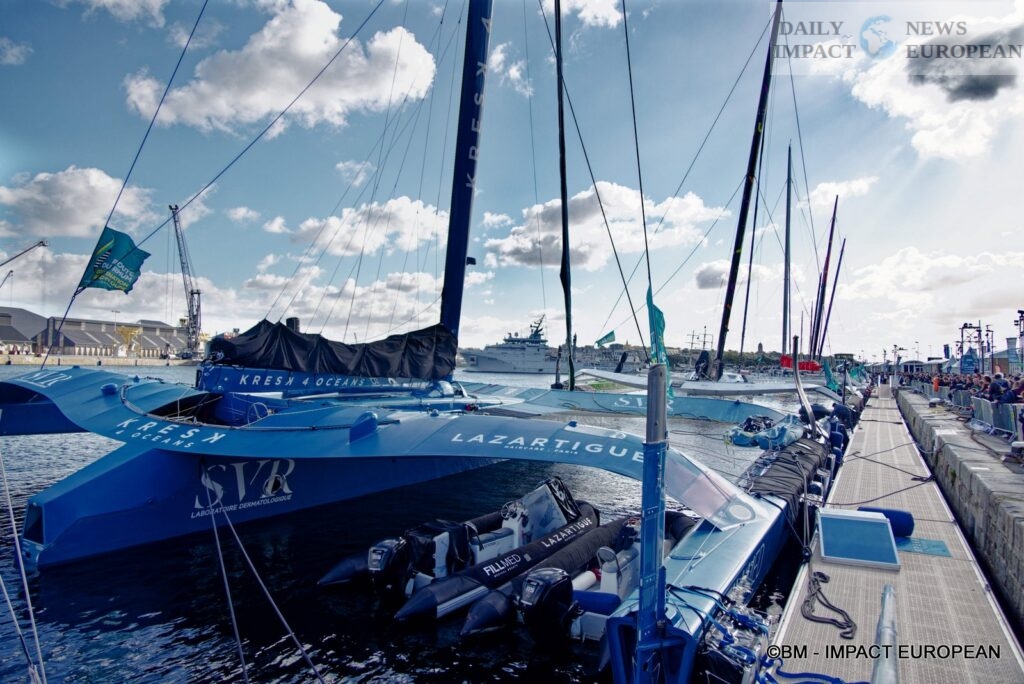 The start of the 12th edition of the Route du Rhum was given this Wednesday, November 9, 2022. The 138 registered skippers threw themselves into the battle for victory in this legendary solo transatlantic race, from Saint-Malo (Ille-et- Vilaine) in Pointe-à-Pitre (Guadeloupe).

The departure originally scheduled for Sunday November 6 has been postponed to Wednesday November 9 due to the weather. The president of the Guadeloupe region, Ary Chalus gave the start, accompanied by the mayor of Saint-Malo, at 2:15 p.m. (Paris time).

On the Route du Rhum – Destination Guadeloupe, all competitors must travel 3,543 nautical miles, or 6,562 kilometers (1 nautical mile equals 1,852 km). They all adorn themselves at the same time, on a single starting line. A veritable Atlantic sprint towards the finish line, the Route du Rhum will still prove to be difficult for most people, in line with the stories told by sailors for more than 40 years.

On the starting line, the eight Ultims involved, the largest boats in the fleet, quickly took their ease. In one hour and six minutes, Charles Caudrelier had reached Cap Fréhel, the last course mark before Guadeloupe. It is the latter who are expected first in Guadeloupe, within a week depending on weather conditions.

The first night was very active. The competitors in the Route du Rhum – Destination Guadeloupe spent a good part of the time playing their best with the rotation of the wind towards the southwest and the alternating ebb and flow of the current.

With a lead of around thirty miles and given the performance of the Ultim 32/23s, which are sailing at between 22 and 25 knots, the Maxi Edmond de Rothschild is around an hour and a half ahead of her closest pursuers.

After this first day, damage was to be reported to the Class40s. Several boats hit rocks. Twelve competitors are stopping ashore.

Kéni Piperol, leading the Class40! At midday on Thursday, Guadeloupe was west of the island of Ouessant, towards a “big piece”: the Bay of Biscay.

The Martinican Sacha Daunar, sailing under the colors of the Guadeloupe region, had to turn around towards Saint-Malo and was taken care of by the doctors who indicated “that he must be treated on land urgently with a treatment intense over two or three days,” explained his association on Facebook.

As expected, the cold front linked to the depression moving up from the Azores towards Ireland produced sustained winds on the way to the West Indies, with gusts of up to 45 knots in rough seas.

What to remember from the night of November 10 to 11 on La Route du Rhum – Destination Guadeloupe:

– At around 3:30 a.m. this Friday, Damien Seguin’s IMOCA Groupe APICIL was hit by a cargo ship causing it to be dismasted.
– The fault of Charles Caudrelier (Maxi Edmond de Rothschild) for premature departure in Ultim 32/23 has been lifted.
– Olivier Heer (Olivier Heer Ocean Racing) in IMOCA, Mikaël Mergui (Centrakor) in Class40 and Philippe Poupon (Flo) in the Rhum Multi category resumed the race after their respective technical stops.
– Armel Le Cléac’h (Maxi Banque Populaire XI) reached his home port, Lorient, around 11 p.m. His team carried out a complete check of the boat and had to reinstall the initial daggerboard so that the maxi trimaran could go back to sea.
– Jean Galfione (Serenis Consulting) is escalating in Brest following an accumulation of technical problems but hopes to get back to school quickly.

– Laurent CAMPRUBI;
– Antoine MAGRE;
– Martin LOUCHART (Randstad-Ausy) forced to abandon the race after hitting rocks on the night of 9 to 10 November;
– Geoffrey MATACZYNSKI, after an autopilot problem and the genoa torn on the evening of November 9, Geoffrey Mataczynski on the Class 40 Fortissimo turned around and arrived Thursday morning in Saint-Malo to diagnose and repair the boat;
– Jonas Gerckens, abandons the race: “I could have passed beyond my state of health, but I no longer felt secure with a J1 sail that was probably secure and which could have unfolded when crossing the next big cliff. Face. In this case, the situation could have been much more serious for my boat and for myself. Not to mention the malfunction of my autopilot which no longer allows me to ensure my minimum safety”.

The warm-ups for the start and the Tour of Brittany are now well behind the 129 skippers still in the race who, for the most part, have taken their oceanic pace. The fight is raging in each class with the favorites at the rendezvous, watching as the two fronts pass camped on the near Atlantic, a first turning point in the race.

To remember at midnight on November 12:

129 skippers still in the race on the Route du Rhum – Destination Guadeloupe.

Oliver Heer is currently returning to Lorient from Saint-Malo to carry out major repairs on his IMOCA and intends to resume racing.

Since the start, the conditions have been very mild for the month of November. Close-hauled and quite a few tacks of course, but after the excitement of the first hours and the demanding rounding of Brittany, many skippers were able to recharge their batteries last night in a fairly stable wind of 20 knots. That’s good because the hours could be much more rowdy for the race leader. The gaps between the first served and the following could well be added, adding a little more contrast to a race that is already not lacking!

What to remember from the night of November 11 to 12

At 10 a.m. this Saturday November 12, Keni Piperol, skipper of the Class40 Cap’tain Alternance contacted the race management of La Route du Rhum – Destination Guadeloupe to inform that the boat was experiencing a leak.

The boat is heading for La Coruña, 275 nautical miles away. The skipper is fine.

Faced with technical problems, Emmanuel Hammez, the skipper of the Class40 Viranga, is diverting to a port that has not yet been determined.

Philippe Poupon (FLO), competitor in the Rhum Multi category, is approaching La Coruña where he is going to make a technical stop to try to solve a forestay staysail problem.

Returning to Lorient on Thursday evening to repair his broken daggerboard, the skipper of the Maxi Banque Populaire XI, Armel Le Cléac’h, must resume racing this Saturday November 12, without sporting ambitions, but with the motivation to finish the story.

The centreboard of his Ultime Banque Populaire has been corrected and the impacts on the hull have been sealed.
After two very intense days for the Team, the boat leaves the pontoon to allow Armel to resume his race this Saturday.