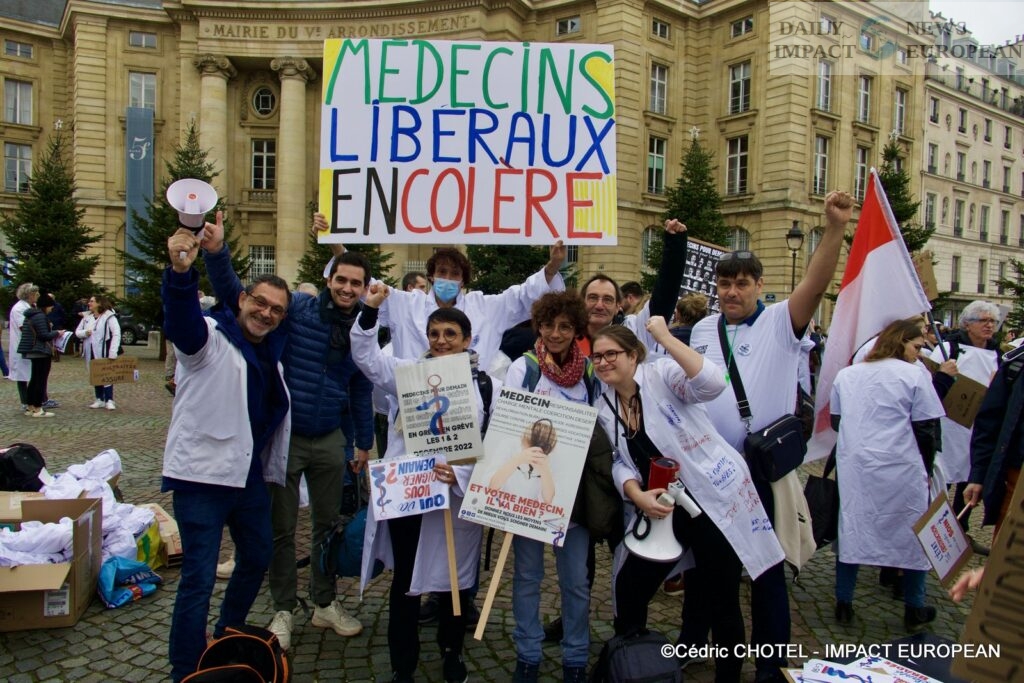 General practitioners continue their strike to obtain a revaluation of the consultation.

General practitioners continue their strike to obtain a revaluation of the consultation.

Liberal doctors took to the streets by the thousands Thursday afternoon in Paris to obtain a revaluation of the consultation, the government saying it was ready if it was “reasonable” and if “the health needs of the French are met”. Organized by the young collective “Doctors for tomorrow”, supported by several unions (FMF, UFML, SML and Young Doctors), this national event rallied the Ministry of Health from the Pantheon.

On arrival, the demonstrators, who came from all over France – 4,000 according to the organizers – knelt down and brandished their stethoscopes while observing a minute of silence. Slogans like: “It’s medicine that we’re killing” and “Doctors, not minions”. In a tide of white coats, demonstrators carried signs “Abused liberal medicine, assured medical desert” or “The state is obstructing your access to care”.

Other liberals are not on strike because they do not share the demands of the collective calling for demonstrations. “Doctors for tomorrow” supported by several unions (FMF, UFML, SML and Young Doctors) is indeed calling for an increase in the consultation fee to fifty euros to create a “shock of attractiveness” towards city medicine crushed by tasks administrative time to the detriment of medical time and which no longer attracts young people.

After a first strike in early December, the collective called for the closure of medical practices after Christmas, a movement extended until January 8. He says that 70% of general practitioners were on strike last week, Health Insurance estimating for its part the drop in activity at 10%. The movement has been sharply criticized by the government, Prime Minister Elisabeth Borne deeming it “really not responsible” because it has increased “tensions on the hospital” in times of winter epidemics. For the director of Health Insurance, Thomas Fatôme, general practitioners will be well upgraded within the framework of conventional negotiation, but an amount of “50 euros would be relatively extravagant”.

Several of the main doctors’ unions, such as MG France, the CSMF, Avenir Spé or the young doctors of ReAGJIR, did not make this claim. Doctors’ organizations, on the other hand, are forming a common front against the proliferating legislative proposals to restrict the freedom of establishment of practitioners in order to repopulate medical deserts.

This Thursday, the Minister of Health said he was ready to increase the amount of the consultation of liberal doctors, but not up to the fifty euros requested, and in exchange for efforts to allow the French to have easier access to a doctor. “Okay, we are increasing the consultation, but I want the 650,000 French people who are chronically ill to have a doctor, because they currently don’t have one, I want us to be able to have a doctor at night, the weekend. It’s give and take, let’s be reasonable”, develops François Braun.

“Doctors are already doing their homework!”, replied a spokesperson for “Doctors for tomorrow” from the car sound of the demonstration.

The government rather defends a sharing of tasks with other caregivers, in particular nurses, some of whom could be authorized to prescribe. A bill to this effect, brought by Renaissance MP Stéphanie Rist and already opposed by many doctors, arrives in the National Assembly next week.